Christopher Golden and Patric Reynolds open up the world of “Joe Golem, Occult Detective” in a big way in this issue. 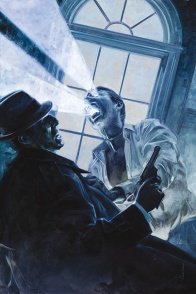 Men in the Drowning City are going mad because of supernatural voices in their heads, and occult detective Joe Golem’s search for an explanation puts him at odds with a powerful man who is after the same knowledge.

Mark Tweedale: I think it’s fair to say “The Outer Dark” #2 is a game-changing issue, so we’re going to have a lot to discuss in this issue, but most of that will have to be saved for the spoiler section of the review. So, if we avoid talking about the elephant in the room for a bit, the most notable aspect of this particular issue is that it’s not really about Joe or the Golem or Lori or Mr. Church. This issue’s focus is largely on the villains of the series: The Nazis (introduced in the previous issue) and Doctor Cocteau (previously glimpsed in “The Sunken Dead” #2).

Personally, I like what Cocteau’s presence does for the story. Unlike the Nazis who are tied up with plot elements that exist solely in “The Outer Dark” arc, Cocteau’s connected in a much larger way. He’s already familiar with Joe Golem, and when he speaks of Mr. Church there is clearly history and contempt there. The Nazis we understand immediately, but Cocteau puts a human face to some of the core mysteries in “Joe Golem.”

Given the way the previous issue unfolded, it seems Golden and Mignola are using “The Outer Dark” to make a very clear statement of purpose for the “Joe Golem” series. At least for me, this arc has really cemented what “Joe Golem, Occult Detective” is.

Christopher Lewis: Completely agree. Mignola and Golden have really stepped up their game. Everything about this issue was engaging and showed what the Joe Golem series can be when in full stride.

Dr. Cocteau is an interesting one to see again. He is definitely a major player and somebody who seems like he is going to be a big part of the overall series. I was also intrigued to see mention of Cocteau’s search for the Lector’s Pentajulum again, which was also discussed in “The Sunken Dead” #2. While discussed only briefly here, the fact that an entire panel was given to present an image of this heart-shaped object demonstrates that it is something important and I am assuming is foreshadowing something bigger to come.

I also have to mention that this was the first issue of Joe Golem without a flashback to the 1400s. Throughout the series, I have noticed that aspects of the flashback scenes typically tie-in to underlying themes and/or turmoils that Joe is dealing with in present day. Since Joe wasn’t the focus of this issue it makes sense to not muddy it with a flashback.

Mark: Yeah, the absence of a flashback sequence was the first thing that jumped out at me, especially given the way things are left in issue #1. However, I didn’t miss it—not because I’m not interested in the flashback material (quite the opposite, in fact), but because the Cocteau stuff was so engaging.

That said, there were a few moments in the middle of the issue, intercutting from Dr. Cocteau and the Nazis to Joe and Detective Weston and back again, which didn’t flow for me. The cuts were jarring. Did you find this as well?

There was one other scene that didn’t sit well with me, but for different reasons. At the end of the main conflict, there were a couple of panels where Cocteau gave a warning to Joe about ‘keeping out of his way’ before he left, which seemed rather forced. I felt the end would have been stronger if Cocteau would have just left without any dialogue directed at Joe.

Mark: Ah, but is Joe even going to remember that warning? After all, with that memory of his…

Actually, this is something I’m hoping will be addressed as the series progresses. We already know Mr. Church is wiping Joe’s memory of his dreams, but in the previous issue, we learned he’s also wiping the memory of even having dreams. And while Joe doesn’t forget any details of his case, he is acting unusual enough that he catches Weston’s attention. Sooner or later, I feel like someone’s going to ask how Joe can be a detective with such a poor memory. From Weston’s point of view, Joe’s useful, but he’s also a potential liability.

Chris: There are definitely multiple people observing Joe acting strangely. In the last issue Lori noticed that Joe’s memories were being significantly affected after drinking Church’s tea, and because of this, we see in this issue that her concern for Joe is affecting her work. It is obvious that she loves Joe after being with him for the last few years and wants to protect him, which can be seen by her deciding to go to have a conversation with Church about the tea.

Mark: Yes, which led to an interesting moment when Church offered Lori a glass of tea. It’s almost like he’s daring her to trust him.

Chris: For sure. Church came off overly willing to explain himself about the situation without any apprehension. I was a little shocked by this, but it seemed that maybe he has been prepared for this conversation for some time.

While I really liked this little subplot, I was very excited to see that from it came a rather large revelation about the Joe Golem universe.

Mark: Indeed it did, and I guess I should drop a second spoiler warning for those that haven’t yet read the end of “Baltimore.” So, “Baltimore” and “Joe Golem” exist in the same universe. It’s just a passing line really, but the ramifications of this revelation are huge. For one thing, I can’t help but wonder if there’s more to the New York earthquake that caused lower Manhattan to flood. After all, Lord Baltimore defeated the Red King in 1925, and the New York flood occurred that same year. Actually, this calls into question much of the history we take for granted. For example, there are Nazis in “The Outer Dark,” so World War II clearly happened, but it would have been a very different war since Adolf Hitler died in October, 1916.

And it means that characters from “Baltimore,” such as Dr. Rose who was entombed alive last we saw him, could appear in “Joe Golem” or another branch of this universe.

Chris: There are so many things from Baltimore that can now be leveraged by the creators, which in my opinion brings a greater richness to “Joe Golem.” For me this is huge. Normally when I read each issue of “Joe Golem” I try to figure out big picture stuff like how events, characters, etc. are connected (while also enjoying the stand-alone story). Knowing that “Baltimore” and “Joe Golem” are part of the same universe gives me a larger basis for contemplating these types of connections.

One of the things that I have been thinking about since the first issue has been the witches from the 1400s story. Are they a big part of the “Joe Golem” world and are they going to show up in the 1900s story? Since the “Joe Golem” is in the same universe as “Baltimore” I now know that there are witches everywhere and I anticipate them showing up in the 1900s story sooner or later. Maybe even some witches that were part of the cult of the Red King. We can also infer that the population is not ignorant to witchcraft, vampires, the occult, etc. because they have lived through the war with the Red King.

Going back to our discussion about Lori going to talk to Church about the tea, because Lori knows the facts of the war maybe if Church tells Lori the truth about Joe it won’t be too far-fetched for her to believe.

I could keep going, but the only other major thing that comes to mind is could Lector’s Pentajulum actually be Baltimore’s heart? That thought might be a stretch, but it was the first thing I thought of when I first saw the object in the “The Sunken Dead” #2.” At that time I disregarded the notion as I thought Baltimore was a different universe, but now I am not so sure.

One other thing I would like talk about was Dave Stewart’s colors. In the previous review we did, I made comments regarding my dissatisfaction with the the coloring. In this issue I found the colors to be better balanced. This was due to the inclusion of more red into the artwork that offset more with the dismal scenery. Also, the blue colors used to present the outer dark during the climax scene were really powerful as they significantly contrasted against the background.

I know you had some hang-ups on color last time too. What did you think this time around?

Mark: The blue is really the anchor of the story. In the last issue it was barely there, showing up in Bodo’s eyes as he’s overtaken by the voices of the Outer Dark, and then in the final scene in just before Vogel jumps out the window. Given where this issue goes, it’s no surprise the blue becomes more dominant. That scene was a real highlight, both story and color-wise. Plus it augments what Patric Reynolds is doing beautifully. I feel like Reynolds is at his best in high contrast environments with lots of shadow, and that’s exactly what this scene was. Stewart’s colors pushed that element further. Dave Palumbo’s cover really latched onto that moment and brought it to life in a big way. His cover work is a really nice match for Reynolds’s interiors, so I hope the Palumbo–Reynolds pairing is something we’ll be enjoying for a long time.

I don’t really have anything more to add, so let’s get to grading. I’m going to give this one a 7.5. This issue drops a number of big developments, but that bumpy intercutting section in the middle threw me a bit. That scene was still the highlight of the issue, but it could’ve been even more powerful if these bumps had been smoothed out so that the tension was stronger. How’d you find it, Chris?

Chris: 7.5. A good story that gives us more context to the overall “Joe Golem” story and foreshadowing of future events to come.

Final verdict: 7.5. “The Outer Dark” #2 covertly opens up the world of “Joe Golem, Occult Detective” and “Baltimore.” Where we go from here is a very exciting prospect indeed.