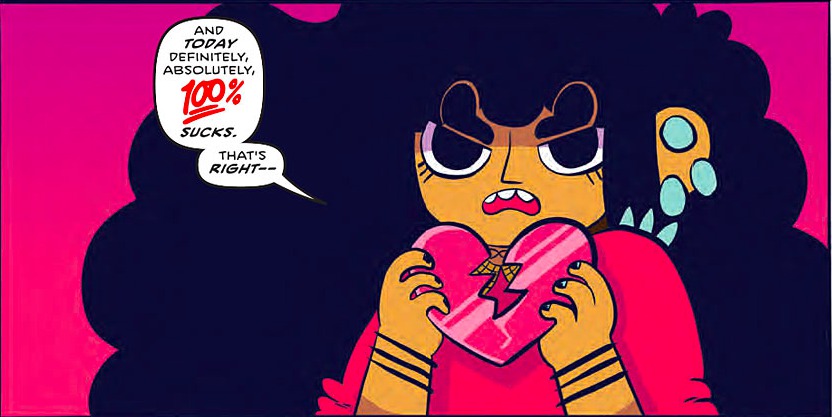 High school is already hard enough for Jonesy, what with the popular girls lording over her, Valentine’s Day turning everyone else into a love-struck idiot, and her crush nowhere to be seen. Add the power to make people fall in love on top of all that? Fugeddabout it! Check out how Jonesy does in our spoiler-free review of this #1 issue from Sam Humphries and Caitlin Rose Boyle below! 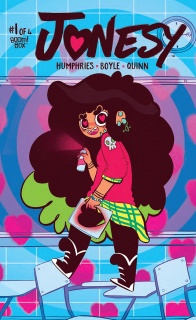 What’s to Love: Just in time for Valentine’s Day, Jonesy is a comic about love that makes us swoon! Sam Humphries (Legendary Star Lord, Citizen Jack) and fresh talent Caitlin Rose Boyle (Buck n’ Lou & the Night Crew) bring something special to BOOM! Box with this series about mad-cap shenanigans, friendship, pals, being a teenager, and figuring out who you are…with a teen cupid twist! If you like Giant Days, dig adorkable romance stories, or just want to smile from ear to ear after reading a comic, you’ll fall in love with Jonesy!

What It Is: Jonesy is a self-described “cool dork” who spends her time making zines nobody reads, watching anime, and listening to riot grrrl bands and 1D simultaneously. But she has a secret nobody knows. She has the power to make people fall in love! Anyone. With anything. She’s a cupid in plaid. With a Tumblr. There’s only one catch—it doesn’t work on herself. She’s gonna have to find love the old-fashioned way, and in the meantime, figure out how to distract herself from the real emotions she inevitably has to face when her powers go wrong…

What powers did you wish you had in high school? Mine was a toss-up between being able to control blood and not feel pain. The former was because it was what I got when I hit random on a super-power wiki and the latter because I listened to a lot of Modest Mouse at the time. I know a lot of young people who would be able to influence their favorite TV show or video game to put their favorite together. Because if Marvel is building up a seventy year history between soul mates like Captain America and Bucky, how is it not going to lead to a big passionate kiss in Civil War? I kind of went off track there a little bit, but the point still stands. Even in today’s world, there’s a lot to be said for wanting to make your favorite couples kiss. Unfortunately, for Jonesy, a vicious sprite of a high school student, that power leaked into the real world. And things get a whole lot more complicated when you’re making people fall in love in the real world.

“Jonesy” #1, the first of a four issue miniseries, doesn’t directly approach the icky boundaries around artificially playing Cupid like Rick and Morty has (vaguely NSFW), mostly because it’s not that kind of show. “Jonesy” is much more concerned with the emotional ambiguities that come from being a weird high schooler. When Jonesy’s Valentine’s Day is ruined by high school rival Susan, Jonesy uses her power to get inventively get back at her. Unfortunately, Jonesy’s misuse of powers leads to her reexamining her morals, like a really Tumblr version of Spider-Man.

I should note here that if you’re not into comics that name-check Tumblr in their solicitation, you probably won’t like this comic. Honestly, I assumed you kind of dropped out after I wrote about Bucky and Steve. Admittedly, the humor in “Jonesy” comes off as pretty random at times. Ferrets play a bigger role than you’d expect and Jonesy actually speaks the “Prayer Hands” emoji because it’s 2016 and this is just how media works now. To be completely frank, I wasn’t on board with the comic at this point, but it tied itself together in a really nice way towards the end. If future issues can have less emoji jokes and more meaningful character interaction, then I’m game. Especially since the art perfectly reflects Jonesy’s chaotic yet well-intentioned mind. There’s a lot of range in the comic’s aesthetic, from Jonesy showing off her anger through thought bubbles filled with flaming dinosaurs to a nicely spaced splash page in the hallway that shows how real Jonesy’s struggles are, even if she tries to solve her problems by concentrating on anime and making people fall in love with ferrets.

Final Verdict:: 7.8 – “Jonesy” #1 is a strong debut that introduces a heroine whose powers have a really neat twist. Although the humor can be a bit all over the place at times, “Jonesy” pulls itself together in a great ending that shows where the comic can go in its next three issues. I would probably hold off on buying the whole thing, but it’s certainly worth looking at again once it’s in a collected edition.