Jeff Loveness is an emerging talent in the comic world, having moved over from big brother Television. So it’s clear he wants to rally some attention by writing a comic about the betrayer of Jesus Christ and quite clearly calling it “Judas.” It’s an age old story that’s been told many times, but in the hands of Loveness and his talented artist Jakub Rebelka, is there still something to be said about this story in comic book form? 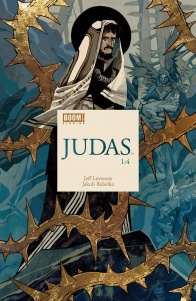 Emmy and WGA Award-nominated writer Jeff Loveness (Marvel’s Nova) presents an exploration of the classical biblical character, perfect for fans of Preacher and The Goddamned.
Judas Iscariot journeys through life and death, grappling with his place in “The Greatest Story Ever Told,” and how much of his part was preordained. In a religion built on redemption and forgiveness, one man had to sacrifice himself for everyone… and it wasn’t Jesus.

It’s tricky to characterise such a legendary personality from age old literature, but Loveness goes straight for the sympathy card here. The Judas you see here is no mere villain, no simple oppose of Christ. Loveness opts for inner monologue for most the issue so we can really get inside the head of our protagonist. The idea here is essentially that Judas was one day enlightened to the idea of question Jesus, and in turn God’s methodology. If he can cure hunger, walk on water, and even banish death, then why did God create the world to be like this in the first place and still not remedy it? It’s an interesting moral question and works perfectly in our own modern era. Loveness allows the readers to sympathise with Judas which gets us hooked and looking for more.

What works best for this is that it also gives us a firmly comic book continuing of Judas’ story. Freshly banished, Judas now embarks on an odyssey through Hell, encountering biblical demons that directly reference the text. Loveness presents them in particular with bombast in grandeur – one nameless group of creatures towers over the page, with Loveness sticking Bible quotes over the page in an ominous way to introduce them and simultaneously inspire dread in the reader. It gives us a chance to see Judas’ clever problem-solving skills too, as he evades them by remembering a metaphoric hint in the text referencing them. Something else, a little more in referral to the text, is how Loveness uses restrained dialogue to convey the larger-than-life characterisation of Jesus. Most scenes we see of him, Loveness doesn’t include dialogue, instead giving us descriptions of the scene through Judas’ point of view. He only speaks essentially three sentences, and each of them are clear and weighty – things like ‘FOLLOW ME’ or ‘YOU WILL NOT ALWAYS HAVE ME’ that are stripped back and devastating in delivery. It’s a great way to convey character that lets the reader piece together the facts given.

For the most part, I find the pacing and structure was solid. Loveness opts to switch between Judas’ flashbacks of time with Jesus and time in Hell, and it keeps the story interesting by not lingering too much on one or the other. What’s more, parts in each section serve to inform the next section before changing – The first change is direct, happening straight after Judas’ hanging himself, but then the next switches from Jesus saying ‘FOLLOW ME’ to Judas’ following his instinct through Hell’s abstract landscape. My only problem here is story real estate. The story of Judas is one of the most well-known stories from the bible, so I feel Loveness could’ve spent less time familiarising readers with it – maybe a page or a few could’ve sufficed instead of a 50/50 split of the whole issue. It might have changed the flow a little bit, but I often simply found myself flicking through the flashback sections quicker because they were stories I already knew.

The biggest sell and best part, not to demean the writing aspect, is Jakub Rebelka’s art. This is an artist who I’ve never heard of until now, and rarely am I so thoroughly impressed by a first impression. What Rebelka brings to the table, stylistically, resembles something of a mix between church stained-glass windows and traditional comic book inking. Breaking it right down, when you get up close in a panel, there’s a mix of textures for different objects. On the first page, there’s a closeup of Jesus and Judas’ beards, and Rebelka uses a mix of scratchy textures and rough, chalk like ones to convey the wiry nature of facial hair. Similarly, the granite and stone slabs in hell have a light grainy texture to them amidst the tasty cell shading. It’s an incredible melting pot of art styles and comes together with magnificent execution.

What strikes me best in Rebelka’s art is how good the setting and worldbuilding aspects of it are. In the first four pages, we get two different environments – the world of Jerusalem, and the world of Hell, that are both drastically different yet each uniquely beautiful. Jerusalem has a crowdedness to it, save for the first part which is sparse, reflecting the loneliness of Judas’ death. There’s always a slew of interesting architecture or market stalls in the backgrounds of Jerusalem, which layer and convey the business of the world powerfully. The scene with Jesus talking beneath a tree amidst a large group of citizens blends the two ideas of Jerusalem together well – people are keenly listening in a huge number to Jesus’ words, but Jesus himself looks so singular and alien, almost conveying loneliness for him. Hell, though, is where Rebelka gets interesting. This isn’t your typical Dante-inspired hell – this is a stark place of jagged rock arrangements and melting psychedelic skies. There’s isn’t a lick of flame to be found, nor cleverly arranged levels of torture. There is deranged monsters, however, and Rebelka renders them with terrifying panache that serves as the cherry on top of this chilling dessert.

Rebelka handles colors in this issue two, and following the narrative structure, we essentially switch between two opposing palettes for each setting, and I find the choice of color for each one interesting. Jerusalem is the place of blazing reds and warm, vibrant oranges, depicting life, the warmth of Christ, and the passion of humanity. Hell is deep, cold blues. This ups the sense of loneliness, and depression – there’s no pride in this hell, only victims and seemingly mindless monsters. Cleverly, there’s also a heavier use of inks and blacks in Hell, but less so in Jerusalem, possibly conveying the absence of life and light in the Devil’s domain. It’s subtle signifiers at work that trick the reader into feeling what the creator wants you to feel for each scene.

“Judas” #1 may be a story older than most, but Loveness and Rebelka prove that there is life to breath into it yet. Loveness has us feel sympathy for the biblical betrayer, and Rebelka brings ancient Jerusalem and an abstract, cold Hell to life with beautiful illustrations. There’s a little too much time spent rehashing what we already know about Judas’ story, but ultimately this is a thoroughly entertaining read.