The man you were taught in Sunday School who betrayed Jesus Christ for 30 pieces of silver continues on a path of self-discovery. In spite of odd timing for a release, readers will find a story that entertains and provokes some reflection on concepts of good, evil, truth, and faith. 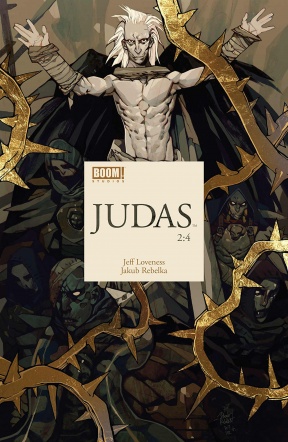 Judas Iscariot has betrayed Jesus Christ, sending him on the road to the death and resurrection story Christians celebrate at Easter. But what happened after Judas received those thirty pieces of silver. We now find Judas in Hell, face-t0-face with the Devil himself. While witnessing the crucifixion, the Devil hints to Judas that he has had a larger hand throughout ancient history, that the Biblical heroes and villains of yore really were not anyone special . . . including the Son of God himself, who will now feel for the first time what it feels like to be human.

It’s a tale as old as time, that of the man whose singular action, whose motivations we never knew, led Jesus Christ to his death and resurrection: the story of Judas Iscariot. When I first heard about this series, I was intrigued and puzzled. How would a Biblical comic based on one of the most significant stories in the Christian faith centered around a character with one appearance in the Bible (but what an appearance!) do with a wider mass-market audience? Would it evangelize and proselytize to its readers or just simply tell a story? I was also a bit puzzled this Lenten/Easter story was being released during the Christmas season — it seemed poor timing. Why not wait a few months when it really is Lent? I also wondered if the religious community would take umbrage with a retelling of the story of Judas Iscariot, the man who betrayed Jesus to the Romans, and casting him as anything but the villain.  Surprisingly, given our polarizing identity and cultural climate, no coverage indicating offense was to be found. (Though I wonder if releasing it now was a strategic move to avoid ruffling those feathers!)

This entire issue is devoted to a conversation between Judas and Lucifer, the latter, as you may recall, being a fallen angel from Heaven. As Jesus expires from life on the cross and Judas watches from the bowels of Hell, the Devil provides a musing on predestination that may make even the strongest of those free will believers question how much hand they have in their own decisions. We all have a part to play in the great chess game of life and our moves on the board (if you believe our demon) have been pre-allocated; there is nothing we can do about it.

As if that wasn’t disturbing enough, the Devil then proceeds to cast himself as the more moral figure than the Son of God, proclaiming truth and knowledge as the true savior of man, not the Word made flesh. Jeff Loveness has created a tale part captivating literature, part morality play, and part meditation on the concept of predestination. Lest you forget the biblical roots, Loveness discreetly incorporates both Old and New Testament verses throughout the narrative, not on every page, but done when it adds proper substance to the action.

The artwork from Jakub Rebelka is sublime. There’s influence of Caravaggio and El Greco in the interplay between light and shadow and an overall flat, stained glass portrayal (you see this particularly in his cover art), but a touch of contemporary classic comic book artwork. Even with these flatter depictions, he still achieves incredible depth and texture with carefully and strategically applied shading and ink work. Rebelka turns the stereotypical portrayals of Earth (and to a smaller extent, Heaven) and Hell on their head, casting his underworld realm in cool shades of blue, and the above-world in shades of fire and fury. It amplifies Loveness’s narrative of questioning what is truly right and wrong, and where truth lies.

Judas himself does not look remarkable, and neither does Jesus; both are drawn relatively close to the standard Biblical depiction we’ve seen the world over. The revolutionary character depiction is left for our narrator, Lucifer, with his cool colors, black wings (emphasizing his fallen angel status), narrow face, and piercing eyes. No red, no horns, no pitchfork, nothing of the traditional visual of the Devil. (He did bear a strong resemblance to Game of Thrones’  Night King or a fellow White Walker, which I found a bit odd upon first reading.) The only touch of red you do see, and it’s a subtle one, is in his eyes. They are there as a reminder evil can take many forms.

I don’t expect this series to change readers’ beliefs: it’s only four issues and based on the first half of the series, that is not our creators’ intent. It won’t make a Christian an atheist, or vice versa. It will, however, make you think, and perhaps not see the world’s morality in simple black and white terms. To provoke deeper ethical thought while also being entertaining is no easy feat.

Final Verdict: 8.5 — Thought provoking and entertaining in both narrative and art, without getting too heavy handed in questions of theology. An early contender for one of my top books for 2018.