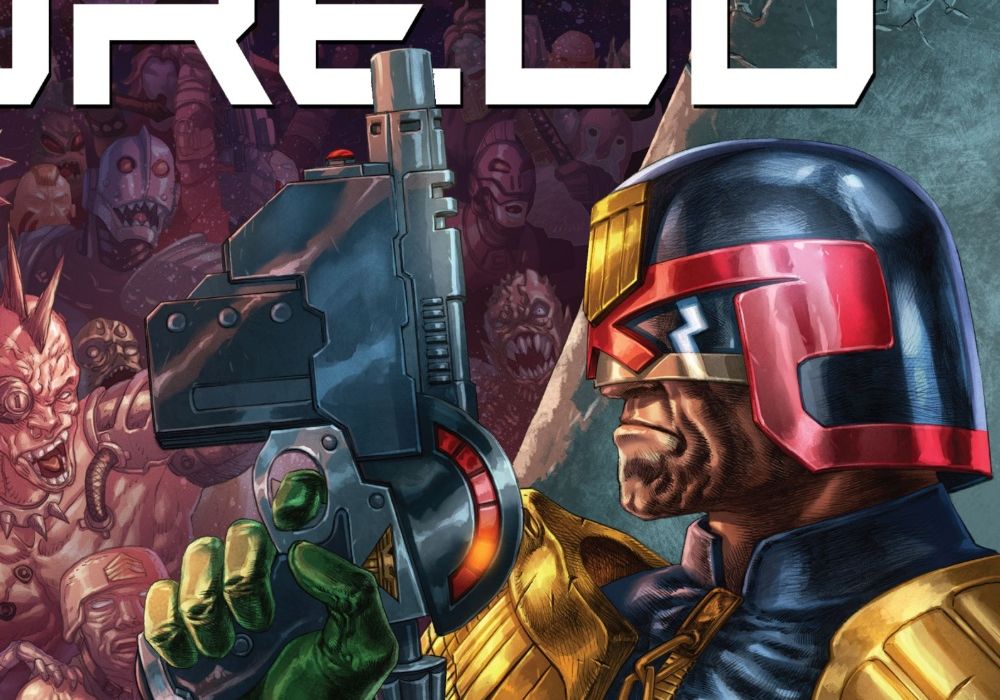 I like Judge Dredd. More specifically, I like the world that has been built around the character and the opportunities for different types of stories set in the dystopian urban hellscape that is Mega City One. You can have over the top satire mixed with heart wrenching emotional tragedy, sweeping epics paired with snapshots of a single life, big idea science fiction next to kooky fantasy. It’s an incredibly rich, very well developed playground that has been the breeding ground for some fantastic ideas over the past forty years.

I don’t know what was going on behind the scenes, but in 2015 IDW started publishing Judge Dredd stories on top of the character’s regular appearances in his original magazine 2000AD. I will confess that I haven’t been keeping track of the IDW Dredd books, but the “Judge Dredd 100 Page Giant” #1 is a nice little introduction to the company’s work. 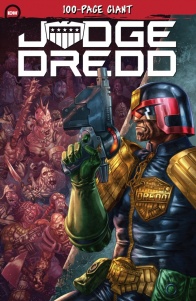 Take a trip through the rough streets of Mega-City One with the one-and-only Judge Dredd! Featuring amazing stories from an all-star cast of writers and artists that stretch from the filthy underbelly of Mega-City One to beyond its walls, there’s never been a better place to see what you’ve been missing.

The first thing you have to understand about the “Judge Dredd 100 Page Giant” #1 is that it’s not really a stand alone book, it’s an advertisement for a number of larger Judge Dredd stories that are either currently published by IDW or will be published. You’re essentially paying for a sampler, after which you get to decide which of these stories you get to pay for.

The second thing you have to understand is that while this book is an advertisement that you have to pay for, it is a pretty effective and interesting advertisement. Each of the stories on display in the “Judge Dredd 100 Page Giant” #1 are effective and engaging samples of the stories they’re a part of and while some are better than others, they’re all very good Judge Dredd stories.

As a result, this review is going to be a collection of super short reviews instead of one large review.

First up is a sample of the published Judge Dredd series Mega City Zero written by Ulises Farinas and Erick Freitas with art provided by Dan McDaid. This story follows Dredd as he wakes up in what looks like the incredibly distant future and his old home is simply gone; leaving a bewildered, yet steadfast Dredd to figure out what the heck happened. While it’s an intriguing mystery, the story does drag a bit and the artwork has a very rough and loose feel to it that might be a turn off to a lot of people.
The next story is Blessed Earth, or as I like to call it Old Man Dredd. Once again, it’s written by Ulises Farinas and Erick Freitas (they certainly like the idea of post-apocalyptic post apocalypse) with art provided by Daniel Irizarri. This is the kind of story that Judge Dredd excels in; Mega City One may be gone but there is still law to be enforced, criminals to hunt down, and Dredd makes an exceptional sheriff. Meanwhile artwork has a more Ligne Claire, pop art style with very bold colors that allow the comic to look very pretty and could almost appear to be younger reader friendly, once you get past the blood and destruction.

Next up we’re back into the old familiar stomping grounds and shoot gallery of Mega City One with a sampler from the story Under Siege, with a script by Mark Russell and art by Max Dunbar. It’s a story where Dredd has to team up with the residents of a mega block to defend it from an incoming horde of mutants and is probably the closest thing to a “true” Judge Dredd story that you’ll find in this book. All the hallmarks of the classic Mega City One are here, from the extreme violence, to the bored and destitute masses who have somehow managed to get their hands on a terrifyingly large number of guns, to the wacky social commentary and silly sci fi interpretations of modern day life. The art is mostly realistic with a few cartoon elements added to it that allow the comic to blend high paced action with some massive shots of the crumbling infrastructure of Mega City One. If you were a fan of the 2012 Dredd movie this is a remarkably similar story, instead of homicidal drug dealers it’s an army of homicidal mutants.

After that we have a story titled Toxic, written by long time comic writer Paul Jenkins with art by Marco Castiello. In this story Dredd travels to one of the deepest, darkest, most unpleasant places in Mega City One where a strange alien race has managed to find a home and is inexplicably making the lives of the residents more comfortable and bearable. Unfortunately, word gets out that Mega City One is harboring illegal aliens and all hell breaks loose. It’s certainly a story with something modern and relevant to say and it looks like the man in charge of the anti-alien protests bears a striking resemblance to former White House Chief Strategist Steve Bannon. Meanwhile, while the book probably could have benefited from artwork that made Mega City One look dingier and run down, it does a great job at displaying the emotions of the most destitute people of Mega City One who are desperately trying to make their lives just a tiny bit better.

The final story is a very short, two page preview of a story titled False Witness and is written by Brandon Easton with art by Kei Zama. It’s a story about an ordinary person in Mega City One who used to be a cadet for the Judges but washed out, and now it appears he makes a living as a runner and/or small time crook. Out of all the stories in this book, this is the only one where Dredd isn’t a main character or audience POV character. It’s certainly a nice change of pace to see Dredd and the Judges as the larger than life legends that they must appear to be from the point of view of the ordinary people and the artwork makes great use of thick shading and heavy lines in order to make Dredd and his robot back ups look as intimidating as possible.

While it may seem a bit odd, and not entirely fair, to have to pay for a large brochure of story samples, the “Judge Dredd 100 Page Giant” #1 is an engaging, interesting, and effective sampler of some very good Judge Dredd stories.