Justice Academy drop-out Mathias has built a comfortable life working as a courier for Mega-City One’s most elite citizens. But after he uncovers a horrific conspiracy stretching from the Cursed Earth to the city’s seats of power, Mathias also finds himself pursued by legendary lawman, Judge Dredd! 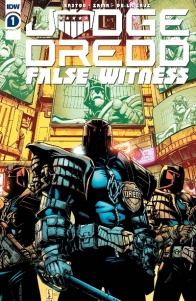 Mathias Lincoln was once a Justice Academy recruit, hoping to one day help clean up the streets of Mega City One as a Judge. Though those dreams came to an end, he has made quite a living dealing on both sides of the law as a courier of items of all kind for high profile clients. Given a briefcase with an important item to be delivered, Mathias’s current task pulls him out of the gray area he usually resides, and into a dark conspiracy that could ruin or end his life when the law is on his tail.

Unaware of the true power of the McGuffin he carries, Mathias springs into action to get the package delivered to the client, and is almost immediately swept up in a problematic situation. But before that, he is climbing, jumping, and soaring through the city, internally waxing philosophic. His thoughts roam from law enforcement, to his current line of work, to fascism. It is all very topical, and typical of a “Judge Dredd” story. It is well done, but feels like yet another re-introduction to this world; something that isn’t really necessary. After decades of 2000 AD publications, two movies, and quite a few years of these new stories being published by IDW, this is all old news.

The Megablock he is cutting through is a site of riots and when Judge Dredd shows up, aided by multiple Judge Droids, things go from exciting to terrifying very quickly. While Mathias tries to stay to the outside of the skirmish, he unfortunately gets bulls-eyed by the droids while defending himself from some street punks. It is all very classic “Judge Dredd.” It’s always fun to see this sort of thing. As it is usually focusing on street level stories like this, this feels right at home.

The use of the Judge Droids is fun too. They are just as tough and full of the ‘all mighty justice’ as any of the human Judges. It’s pretty funny to see them sticking their fingers in peoples’s faces and kicking ass. Looking to search Mathias’s backpack, they refuse to take no for an answer. Knowing that he probably carries something of an illegal nature, or at the very least something that would lead to questioning and the loss of the item, the client, and his job, he makes a run for it, slamming square into the chest of Judge Dredd. A chase ensues through the city’s massive sewer system, streets, and various buildings, ending with some huge reveals that will only make you want to reach for issue two as soon as possible.

The script is very well done. Easton tells a well fleshed out story, and while it may feel a bit tired to delve into the city, the Cursed Earth, the citizens, the mutants, and plenty of the other details found in many a “Judge Dredd” story, there is no fault in his ability to give us these details while scripting the plot. It moves at an even pace, and at no point is it boring. He also does an excellent job of making Mathias, not Dredd, the focal point of the issue. This is his story and the long arm of the law is the thing he, and we, most want to escape from.

With that in mind, Easton does an excellent job reminding us that Dredd is not a hero we should look up to or aspire to be. He is a symbol of this Fascist State of America. His whole purpose in life is to perpetuate this government system. He stands for everything that a freedom loving person should hate. It all works here. We do not want Dredd to succeed. And it is not just because the issue opens up by connecting us with Mathias. He isn’t exactly someone we should like, but having seen the inside of the system, he feels the same way about it we do, and we want him to make a clean getaway to just go about his life.

While this story takes us through a decent chunk of Mega City One, it ultimately feels pretty claustrophobic. Starting with the dark rooms with questionable dealings, the sewer system with icky mutations ready to grab and devour the main characters, offices, and underground labs; each setting is meant to feel uncomfortable and confining for different reasons. The pairing of the writing and art get us there.

Kei Zama brings a multi-layered and fully living Mega City One to these pages. For such a huge city, and the types of stories typically in the pages of “Judge Dredd” there have been many artists that try to fill up every panel and give it a pulse, but most of the time it feels empty. Even with 100 people and flying cars zipping about. Zama crushes this comic. Her work accentuates the scale of the city, and its inhabitants. She really brings a kinetic animated style to the entire thing and even in moments that the script may be lacking or back-peddling to cover long standing exposition, her work keeps things on the move, for the better. Wild, and ever expanding, this is a version of Mega City One and Dredd that is not always seen, and she knew the perfect route to take this book.

For many, many years there were no Judge Dredd stories in color. The early mini strips and issues were simple black and white, that left some of the action and energy lacking. In more recent years, as we’ve gotten more issues in color, we have gotten a wider array of styles coming to this world. Eva De La Cruz brings a beautiful painterly look this comic, and her work absolutely shines when it comes to coloring Dredd, his colleagues, and droids. With a palette that is well known to fans, it is hard to mess up the colors we are used to and she nails it. Working over Zama’s sketchy and energetic lines, the panels go between feeling like the usual look of Dredd and something you’d see in a Shinichirō Watanabe anime. Everything in the panel has a life, the clothing, the setting, the inanimate objects. Everything moves of its own accord.

“Judge Dredd: False Witness” #1 tells an interesting and exciting story, even when it falls back on the typical exposition and set pieces. It does work as both an introduction to the world and just another crime thriller for those long-time readers, but it doesn’t quite make the leap to something new and extraordinary. It has a little bit of something for everyone and that’s what makes it such an enjoyable read. It throws some on-the-nose social commentary into its cyberpunk dystopian action story. There are sewer monsters, muties, and robots, and it should all sit fairly well with science fiction fans of any kind.

This art team truly shines throughout the entire issue. Having two women artists like Zama and De La Cruz on a book like “Judge Dredd” is something that probably should happen more frequently as it is their energy that elevates this book. Easton’s talent as a writer should not be understated and now that the plot is fully underway and introductions can be set aside, it can be safely assumed that he will be able to stretch his legs in the coming issues.

Final Verdict: 7.5, An exciting and well done introduction to this story, that never quite makes the leap to a great addition to the canon. Stellar artwork ratchets up the energy and quality overall, and is worth the pick up.