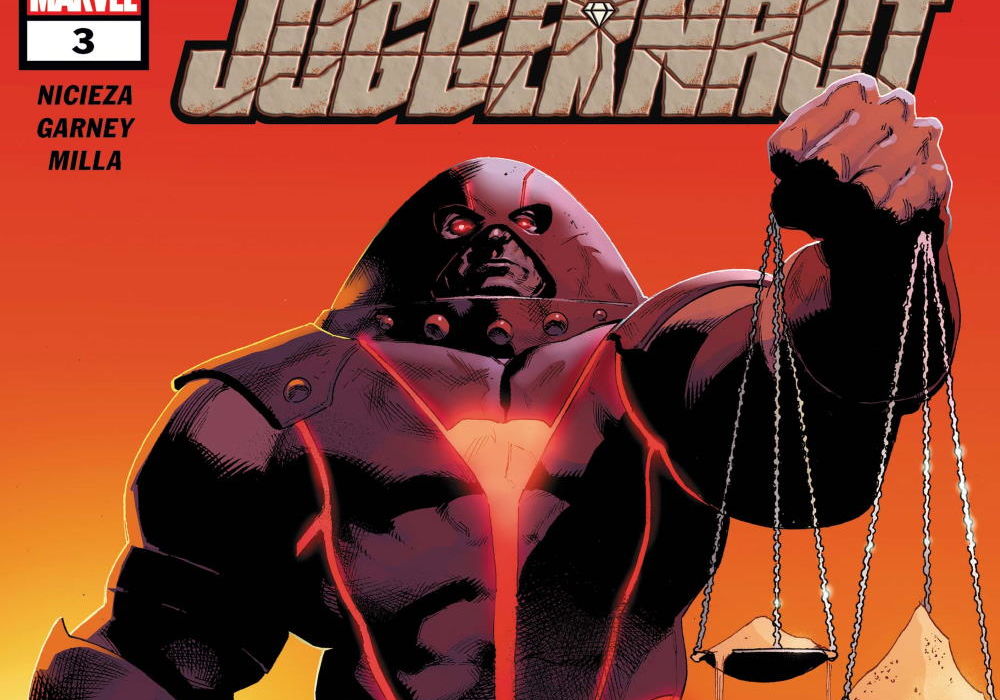 I hear creators of classic comics (especially “X-Men” comics) talking a lot of smack about contemporary books. Some of them, like Chris Claremont, have arguably earned the right. Others, like Rob Liefeld, have definitely not. But one person who you never hear say a bad word about anyone is Fabian Nicieza. Instead, he seems to have channeled all that energy into learning what makes those new comics work, and folding those ideas into his existing style. What results is a comic that definitely reads a little strange, but has a vibrancy missing from the recent work of many of Nicieza’s peers. In other word: no one is stopping “Juggernaut!” 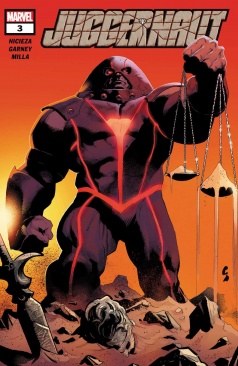 JUGGERNAUT ON TRIAL! It’s no secret Juggernaut has been on the wrong side of the law in the past… but can even justice stop him? Or will he tear down the system?

If you need a reminder, Nicieza was one of the definitive “X-Men” writers of the 90s. He also helmed the now-iconic “Cable & Deadpool” series of the early 2000s. He’s a great fit for X-books, being equally adept at zippy, quippy dialogue and soap-opera worthy melodrama. “Juggernaut” is… none of those things. But that’s kind of what makes it so impressive. It reads a lot like any other modern Marvel miniseries. It’s a slice of life in a zany world, showing the lives of the people who are a little ways out of the spotlight.

I love Nicieza’s dialogue in this. It would have been so easy to have Juggernaut be the weary protagonist and D-Cel be the annoying sidekick. And sure, they are that a little bit, but the characters have the space to show their multiple dimensions. D-Cel is glued to her phone most of the time, but she’s also pretty cool. Juggernaut is a misanthropic meathead, but he shows signs that he may have some hidden wisdom. You like the characters because Nicieza likes the characters, and it shows.

Nicieza is paired with Ron Garney, an artist who came up with Nicieza in the 90s. Garney has a sort of scratchy, busy style so he is well complimented by colorist Matt Milla. Together their images feature large clean expanses of color in the foreground, and tons of chaotic detail in the background, perfect for a story about a dude who breaks lots of stuff. The scale of the action is easy to follow, but the consequences are a little harder to follow, which helps root you in the psychology of this living force of destruction. He’s focused on what’s happening now, and what’s ahead. Juggernaut never stops to turn around and see the rubble in his wake. Perfect!

Where the book loses me a bit is in the plot. The dialogue and the art are fun and attractive, but I am really losing the thread of the story. I know that D-Cel wants to get a million followers on fake YouTube and that she wants people to see Juggernaut like she does, but events don’t really logically follow each other. The issue starts in a court room, picking up from the previous installment, but things are quickly derailed by the arrival of lady Sandman (who I am told is called Quicksand). By the end of it, a construction company is asking Juggernaut to help them track down a Captain America villain. So was he guilty or not guilty in the trial? I don’t know or really care because neither does the issue.

The best parts of the book though primarily happen in flashback. It’s often repeated that though he primarily tangles with the X-Men, Juggernaut’s powers are magical in nature. So seeing him journey up a mountain to a mysterious temple to consider his powers is very cool. Nicieza, Garney, and Milla are clearly having a ball in those scenes, and I’d love more Juggernaut stories that get into his messed up relationship with the chaos god Cyttorak.

With “X-Men” again the biggest thing at Marvel, this “Juggernaut” series is a weird beast. It’s mostly disconnected from the wider X-line, and feels very stylistically divorced from what Hickman and company are trying to do. It feels like… a comic written by Fabien Nicieza, drawn by Ron Garney and colored by Matt Milla. These guys are all pros, and even when they aren’t setting the world on fire, their most meager efforts can outshine some people’s best work. I don’t know if “Juggernaut” will get a non-believer to love its main character, but it’ll sure entertain a comics fan for 22 pages. And sometimes that’s what making comics is all about.

Final Verdict: 7.3 – Juggernaut #3 is created by old pros, so it feels like a familiar comfort read.