So, we’ve finally reached September: the nights have begun to draw in and we’re all feeling the fatigue of a truly tough year. So, like a burger-shaped beacon of hope, Ryan North is here to make us feel good again, as he takes over Riverdale’s lovable resident glutton. However, does “Jughead” #9 prove to be more than just comfort eating or do we have a little more to chew on? 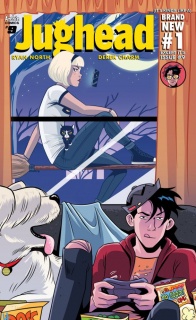 Written by Ryan North
Illustrated by Derek Charm
(It’s kind of like a) BRAND NEW #1… except it’s issue #9! SABRINA makes her debut in the NEW RIVERDALE and things are about to get INSANE! New story! New arc! New creative team! Pop Tate’s has a new mascot: it’s a lady in a burger costume with a giant burger for a head! And she never takes off that giant burger head! And she and Jughead really hit it off, probably for that very reason! But is it possible Burger Lady is MORE than she appears? Find out what happens when Jughead meets a burger he REALLY likes — and a POWERFUL and unexpected new force in Riverdale is revealed!! P.S.: that powerful and unexpected new force is SABRINA THE TEENAGE WITCH! SHE’S the Burger Lady!

Earlier this week, I had originally planned to review something completely different. The book in question had an interesting solicit and a creative team I liked behind it, so I was all ready to jump in. I headed down to my local comic book store on Wednesday as per usual and picked up my first choice, however after a perfunctory flick through, I immediately lost heart. The book was drab looking and grey, with panels I’ve seen a hundred times or more and while it could have possibly been the greatest comic book ever written, I just wasn’t interested. My heart longed for something bright, joyous and lovely, there is only so much ‘grimdark’ a comic book fan can take. After checking the shelves for the other new releases that day my decision was clear, Ryan North’s first issue of “Jughead”, guest starring perhaps one of my favourite childhood characters of all time, Sabrina the Teenage Witch. Everything about this book appealed to me, even if I’m not the world’s greatest Archie Comics fan, it was just the antidote I was looking for. Though would it turn out that I’d made a big mistake by judging a book by its cover or was I justified in making the swap?

Well, I am very pleased to say I had made the right decision. Ryan North, joined by Derek Charm on art duties, makes a seamless transition into the world of Jughead. North had big shoes to fill, following on from Chip Zdarsky’s hilarious yet surprisingly touching and sincere run. The whole issue is filled with laugh out loud moments that range from conceptual, fourth-wall breaking in-jokes to the most broad and silliest kind of gags.

The story, for instance, begins with Jughead presenting a life-sized scale replica of himself, named ‘Grubhead’, made entirely of cheeseburgers at the school’s art competition. He of course proceeds to eat his creation, because that’s what Grubhead would have wanted; it’s just so wonderfully dumb! However, the crux of the plot centers on Jughead’s burgeoning crush for the ‘Burger Lady’. If you’ve been reading “Jughead” you’ll no doubt be aware that Jughead revealed he is asexual and though it may seem like North is perhaps backtracking on Jughead’s asexuality, I don’t think that is the case. It makes perfect sense that he would find himself falling for a person dressed as a giant burger who gives him coupons for money off at Pop’s. And after it is revealed that the Burger Lady is none other than Sabrina, we clearly register disappointment on Jughead’s face, thanks to Charm’s superb facial work. North’s story on the whole not only showcases Jughead as the brilliant comic creation that he is, but adds another layer on to him, making him more compelling and relatable than ever.

If there is one bone of contention for me however it would be there is not enough Sabrina. I make no excuses about her being a childhood favourite of mine and while I’ve been thoroughly enjoying “The Thrilling Tales of Sabrina” it is so good to see her return to her more whimsical and lighthearted roots. However, I’m sure we are going to see a whole lot more of her come next month as North pretty much ends on her arrival. I would also like to see North look into exploring different ways in how he tells his jokes. His commentary like jokes at the bottom of every page has become his signature I guess, but it is in danger of becoming a crutch for him. Luckily, they are still very funny, but I feel he’s becoming too reliant on them, it would be interesting to see what other devices he could think of.

Together, North and Charm create a Riverdale I wish I could be a part of. Not only does it look fully realised and dreamy, but every character is on point. I knew North was able to craft likable characters, but here they feel more rounded than ever, his depiction of youth is one of my favourite examples in any recent book I can think of. While Charm captures what makes each character unique, he gives each face a little quirk, which not only prevents everybody looking the same, but provides him to create some excellent visual gags. He exaggerates Archie’s eyebrows to show severity (especially when Betty or Veronica is involved) to compliment Jughead’s louche-ness. He also plays around with page layouts and panel structure to bring out as much humour as he can. There is a funny moment where Jughead decides to eat his burger counterpart, captured in a over-the-top dramatic panel while a montage is laid out simply and effortlessly. I think “Jughead” is going to be in excellent hands going forward because as it stands, the team of North and Charm have already proven to be excellent collaborators. You wouldn’t want anybody less capable with humour and emotion on a book like this.

Final Verdict: 7.8 – Exceedingly funny and as well written as any teen comedy, if not better. Ol’ Jughead is in good hands.