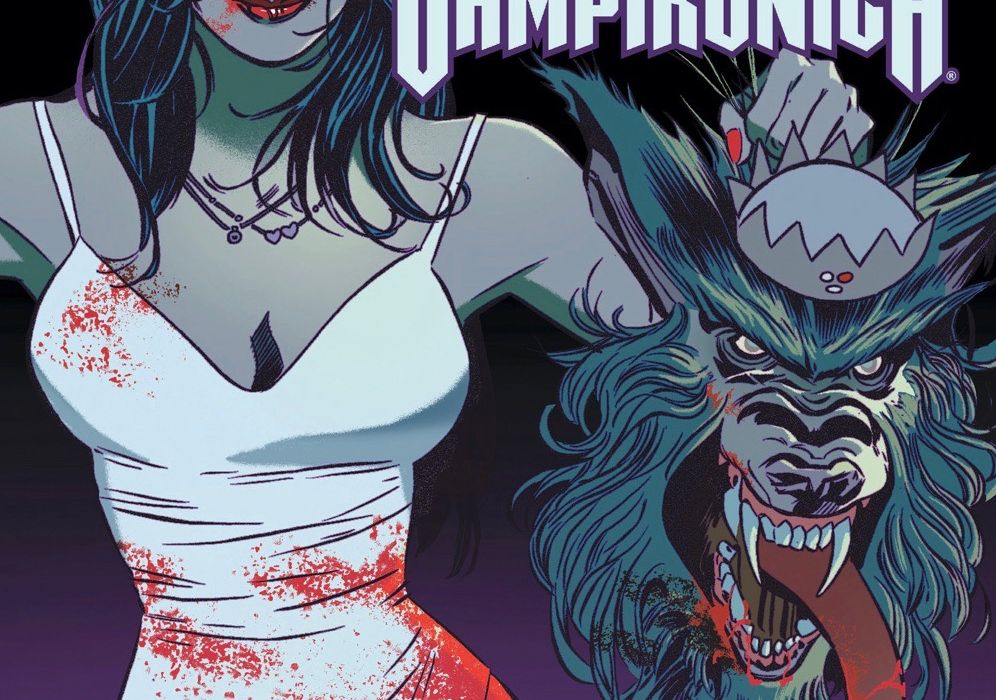 Maybe by the time “Jughead the Hunger Versus Vampironica” hits the third issue the story will finally rise to the level of the art, but for now, it’s pure eye candy with a convoluted and cumbersome script. (Warning: may contain minor spoilers.) 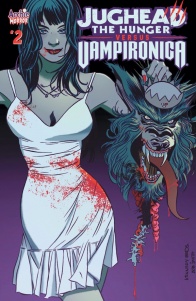 Jughead has had a lot to deal with since going all “Full Moon.” Betty Cooper werewolf hunter, Reggie Mantle werewolf pack . . . even a Frankenmoose. But has any of this prepared him for Vampironica? Or the horde or vampires that are invading his reality with her? Nope!

Frankly, the debut issue of “Jughead the Hunger Versus Vampironica” utterly failed to deliver on its titular promise. Instead of an action-packed, real time story reflecting the front cover’s unambiguous premise, we got a crap-ton of exposition and narration. Ultimately, with a steady dose flashbacks and tangents that centered on the particulars of vampiric phenomena in Riverdale and how Veronica Lodge may fit into the hierarchy of this supernatural shadow world, it read much more like a recap issue of “Vampironica” than the first chapter of a new series.

Well, if you loved the first issue – or even if you found it overly tedious – you’ll absolutely love issue number two. Or, at least, find it to be equally tedious and exposition heavy. Basically, the second installment of “Jughead the Hunger Versus Vampironica” is the same exact idea as the series premiere, but with Jughead at the center instead of Veronica. Once again, it basically reads more like one-shot or recap issue in an existing series rather than something new.

I get the fact that new fans can’t be dropped stone cold into this particularly weird, horror-ific strain of the Archieverse without any context, but this whole series is slated to be just 5 issues long. Meaning, at the end of this second book, we’re already 40% of the way to the finish line, and yet, the two main characters have barely appeared in the same scene, much less in the same timeline in the same multiverse.

Don’t get me wrong, most of the information covered in the first two issues is different from what we’ve learned in previous Archie Horror series, it’s just not all that compelling. More importantly, it never feels particularly vital to our enjoyment of the story. Instead, it just comes across as a lot of clutter and noise. I mean, in the wake of “Jughead: The Hunger,” “Vampironica” and “Blossoms 666” – not to mention “Riverdale” the TV series, “Riverdale” the comic book and all the other spinoffs, mashups and crossover events that come out of Riverdale in the past three years – I think we know by now that the Archie franchise is totally unafraid to explore some pretty unconventional characterizations and bonkers story lines. I’m also equally certain we fans are ready and willing to simply strap in and go along for the ride.

Instead, here we are, winding our back and forth through the socially engineered ticket line waiting to get on board.

Everything’s been bought and paid for. We’re hyped up and ready to go, but first the Man Behind the Curtain wants to tell us all about why two of the hottest Archie properties are on a collision course. Something needs to tie all of it together and he’s bound and determined to explain the underlying logic and distant events that set the stage for this inevitable fusion of two completely different timelines.

Really? Does it actually even matter? Does anyone pay attention to the narrator on the loudspeaker while they’re dying for the ride to start? Come on, already. Let’s go!

In the end I think the book’s many creators would have been better off simply introducing the two iconic main characters, giving us a cursory, even half-assed explanation as to how and why they’ve come together and simply left it at that. We’re here for the gore, the exploitation, camp and dark humor. We don’t really need – or want – two issues of convoluted, overwrought worldbuilding to explain why Betty is packing heat, why Jughead craves human flesh and how Veronica is somehow both a vampire and vampire killer. We’re here for the super dope art and unbridled hijinks. I promise, none of this will be on the final test.

Thankfully, given the sheer number of visual artists and seemingly arbitrary way the their pages break down, the overall aesthetic hangs together remarkably well. Mixing elements of camp, gore, exploitation and cheesy late night horror flicks, it never takes itself too seriously or worries too much about being unnecessarily tethered to reality. It’s graphic, bold, exciting and visually gratifying without descending into sheer gratuitousness.

Colorist Matt Herms does a great job tying everything together with a palette that’s heavy on sickly, creepy greens; fading, twilit blues; and of course, shocking crimson reds. With blacks that are never quite black – even in the deepest recesses of the darkest shadows – it all feels more than a little bit hazy, washed out and surreal. Like an otherworldly dream, within a flashback, wrapped in a fantasy nightmare.

There are certainly some very good moments of snark and black humor within the script. It can be very twisted and funny. But for now, those moments tend to be few and far between, relegated to dream sequences or other non-real moments. In the end, you can’t help but feel like it’s all art, no story. Rather that conflict and action unfolding right before us we get a history lesson. In that sense, it totally feels like we missed something somewhere. The moment is gone and can’t be recaptured. It’s all looking back. Not looking forward. And that can never bode well for wanting to go out and pick up next month’s installment.

Final Verdict: 6.5 Fantastic art can’t quite save an issue that feels like a lot of preamble before the real story finally starts.