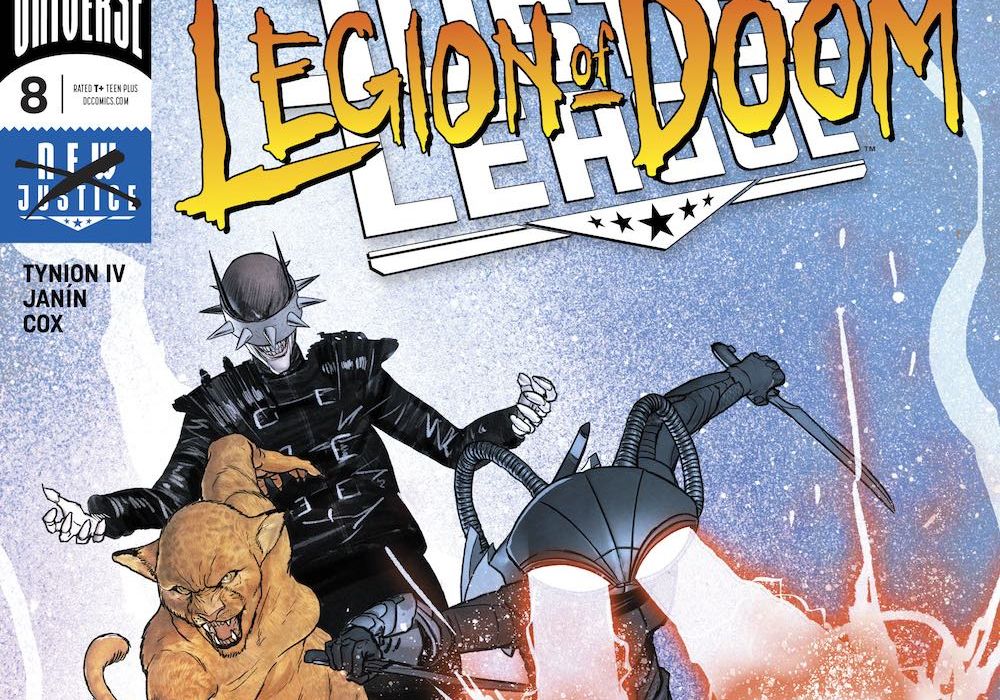 Justice League’s fast, frenetic pacing has made the title a delight to read. However, if there are too many aspects happening at once a series will naturally begin to lose momentum. Thankfully, “Justice League” #8 is here to slow down and more clearly articulate the stakes and gravitas from some of the huge moments from previous issues. The issue is even temporarily switching writers again from Scott Snyder to James Tynion. Artist Mikel Janin is joining the title for art duties as well. The issue is keeping readers on their toes by giving a greater focus on the Legion of Doom as opposed to the usual core Justice League focus. 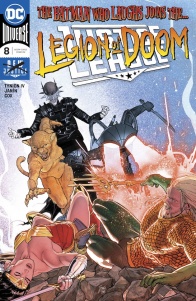 Part two of the “Legion of Doom” storyline focuses on Lex Luthor’s recruiting efforts—and this time around, he’s targeting both Cheetah and Black Manta for membership! Lex knows just what buttons to push to acquire his super-powered muscle, and this issue it’s all about getting revenge on Wonder Woman and Aquaman, respectively. We bet they sign right up as soon as they find out Lex has METAL’s Batman Who Laughs locked up in Doom HQ!

“Justice League” #8 is full of small moments that amount to a really strong meditation on the current state of the series’ villains. Tynion wisely continues to put the focus on Lex Luthor as the core antagonist of the series. Luthor’s exchanges with the rest of the cast and with The Batman Who Laughs show how deep the series is willing to characterize each cast member. Tynion does a great job switching perspective from the Justice League to the Legion of Doom. It is also fascinating to see how the League is scrambling to get just a few steps ahead of the Joker. Ever since readers got to know more about Luthor’s ambitions for the series, the issue started to become structured as if two factions are at war.

Mikel Janin’s art in this issue tends to skew more on the minimalistic angle aside from a few excellent splash pages which show off his full artistic ability. The framing on the introduction of The Batman Who Laughs is an excellent image which seems to have just the right level of intrigue Tynion’s script was calling for. The ensuing pages are full of a more natural motion and have a foreboding green background drawing the attention of the eye. Sometimes, characters who should have a secondary activity are standing lifeless and still making the issue come off as static. While Janin is a talented artist, his rigid characters hold the title’s interiors back from greatness.

The moments between Black Manta and Cheetah take up a large part of the issue and ultimately don’t give readers the deep insight into their characters that other parts of the issue offer. Aside from the dull scenes with the two individuals, the title juggles a very large cast impressively well. While ‘The Totality’ saga is over and the League has emerged victorious, the team lacks the knowledge to use it against the Legion of Doom. This installment does an excellent job further cementing the status quo and following up on some of the unwieldy aspects from previous installments.

Readers get their first glimpse at some future storylines for what is next in the comic including a look at Starman and idea of what is to come in ‘Drowning Atlantis.’ With so much momentum, it appears the war between the Legion of Doom and the Justice League is building towards some sort of large-scale event. However, just because other stories are coming, it doesn’t mean readers have interest in them right out of the gate. This problem is particularly visible in the previously mentioned interaction between Cheetah and Black Manta.

For a series primarily focused on gearing towards the next big plot beat, “Justice League” #8 is a great change of pace. The title does an excellent job fleshing out Luthor’s continued motivations. The installment teases future storylines a little too heavy but the great moments between Luthor and The Batman Who Laughs make the issue worthy of your attention. The big reveals regarding The Source Wall further illustrates the issue is progressing towards something interesting still to come. With a crossover coming up next, will “Justice League” be able to retain that same level of focus?