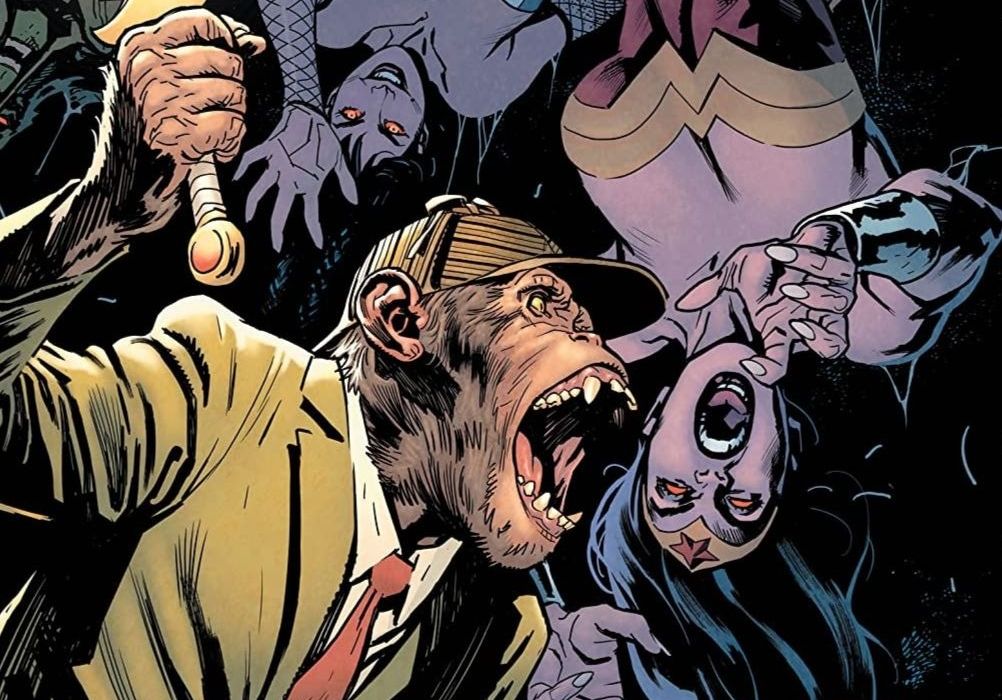 There’s something about comics that provides a fantastic medium for portraying magic. Comics are able to capture the look and feel of magic in a way that sometimes doesn’t translate as well in other visual mediums like movies where the magic can sometimes become cluttered and difficult to follow. Magic in comic books can alter the reality of the world, the colors used help to portray the source of magic, whether it is a sinister force or a channeling of raw power. In the world of DC, magic oftentimes has dark overtones to it. While not always evil, there’s a cost to magic. It’s not simply a force one can draw from at will, there’s a sacrifice to being involved with magic, something that “Justice League Dark” explores. In “Justice League Dark” #25, Ram V explores DC’s deeper lore in a way that doesn’t feel overwhelming by anchoring it in a solid story about family. 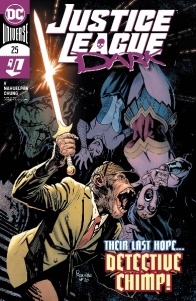 Cover by Yanick Paquette and Nathan Fairbairn
Written by Ram V
Illustrated by Amancay Nahuelpan
Colored by June Chung
Lettered by Rob Leigh
It’s their greatest crisis-and the Justice League Dark is a team divided! Wonder Woman, Zatanna, and Swamp Thing are outmatched and defeated at the hands (and endless teeth!) of the Upside-Down Man. But Detective Chimp, Doctor Fate, and Man-Bat will do anything to save their teammates, even turn to the man they swore never to trust: John Constantine!

A large part of“Justice League Dark” #25 explores magic and the cost of being a practitioner of its mystical power as Zatanna and Wonder Woman face off against the Upside-Down Man, a being who is holding Zatara hostage in his magical realm. But the issue begins with a flashback after a young Zatanna revives a rabbit, Zatara intervenes and informs his daughter that magic always has a cost. It seems like this knowledge is preventing her from using her true powers in the realm of the Upside-Down man. While she knows that her magic is stronger, the Upside-Down Man mocks her and the thought that she would be able to beat magic itself, that they are limitless in this realm of pure magic. Amancay Nahuelpan’s design of the Upside-Down Man and their realm creates a sinister identity for the magic of this place, creating a horrifying void between realities. June Chung helps to enhance the dark and expansive void by using deep purples contrasted with the pale whites and greys of the Upside-Down man, creating a sinister and memorable character design. While the portrayal of the magical realm is good, near the end of the issue Nahelpan takes it to the next level by having the power of the Upside-Down Man literally destroy the fabric of the page by having the panels begin to shatter into smaller and smaller pieces as reality is splintering the face of the villain looming out of the reality they are destroying. It created a compelling visual language of the seemingly limitless magical foe. The magical storyline is interesting, seeing Zatanna struggle with her powers and her knowledge of the limits of her magic. But Ram V takes it to another level by using the lore of Swamp Thing to create some truly memorable visuals.

Swamp Thing controls the green, from the largest tree to the smallest blade of grass, he can use the green to help keep the Earth safe from those who would threaten it. But in “Justice League Dark” #25, Ram V takes this power and expands upon it, showing that Swamp Things control over the green is not just limited to one reality, that anywhere there is green, he is able to keep his control over it. While this is some intriguing expansions of the powers of the character, what really makes it work is Ram V’s narration of Swamp Thing. He captures the distance and sadness, but also the determination of Swamp Thing and his role on the team. As he explains to Man-Bat, “I have stood and watched for so long,” now is his opportunity to get involved and save those who help him save the world. It is also in these moments where Amancay Nahuelpan’s art matches the story so well. Nahuelpan design of Swamp Thing has a level of sadness that matches the script. Watching him say what is a possible final goodbye to Abigale and become one with the green is beautiful. Once again, June Chung’s coloring creates a beautiful world that slowly turns into the brown dirt of the roots Swamp Thing uses to transcend realities. The page where he goes between realms has some excellent use of colors like purples and pinks, and then when he rematerializes, he pulls the panels of the comic back together again. While The Upside-Down Man can change the fabric of their reality with their powerful control over magic, nothing is more powerful than the green. The art in the Swamp Thing section feels inspired by “The Saga of the Swamp Thing,” with Swamp Thing floating through the massive root structure not just of Earth, but of reality in general. When he finally rematerializes, he’s a hulking force that is able to counter and even trap magic. Everything about Swamp Thing elevated the issue. While it’s a lot, it’s a good shorthand explanation of the abilities and power of The Green.

That was honestly one of the biggest things about “Justice League Dark” #25 that works so well. There’s a lot going on in the book, big concepts about the nature of magic, the abilities of seemingly supernatural forces like the green, it’s dense, but not impossible to follow. It also builds excitement for what comes next, as the team searches for their answers in defeating this mystical threat. By providing strong visuals of D.C.’s magical world and building upon the mythology of the universe, Ram V is setting up what should be an epic finale.