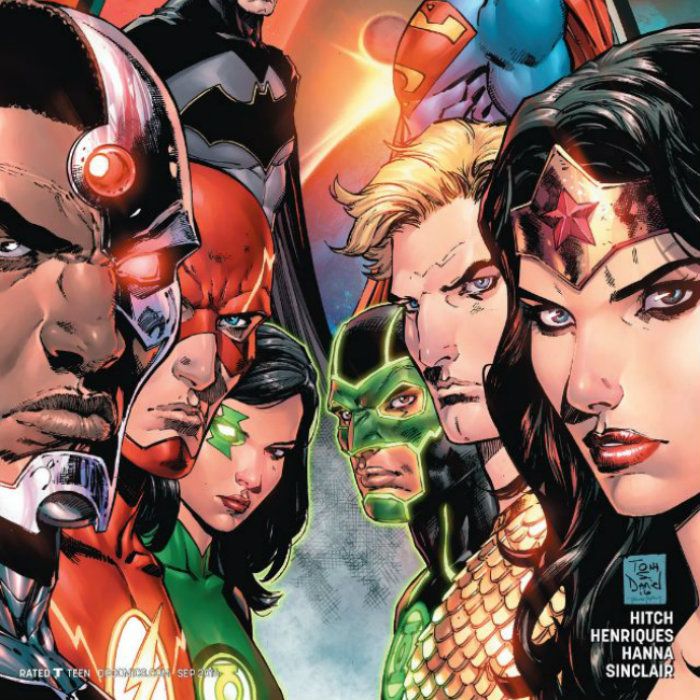 With two new Green Lanterns, a dead Superman, and an alive Superman that’s just like the first one, what exactly does “Rebirth” mean for the Justice League? Also, what’s with that Starro thing killing everyone? All that and more in our review below! Spoilers ahead. 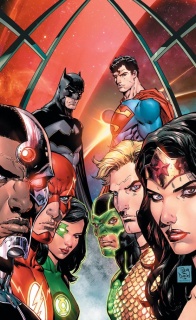 Written and Illustrated by Bryan Hitch

Spinning out of the events of DC UNIVERSE: REBIRTH #1, a new day dawns for Earth’s greatest heroes as they welcome three new members to the team, including…Superman? Who is this strange visitor from a dead world—and can he be trusted? Batman and Wonder Woman aren’t so sure.

So Superman died. I’ve kind of been in and out with DC and cherry-picking what I read but that seems like a pretty important note to start on. From what I can gather, New 52 Superman poisoned himself trying to get his powers back and fell over when the pre-Flashpoint Superman showed up and killed New 52 Supes by stealing the relevance that was keeping him alive. Now all of Old Superman’s friends are mourning his death while more or less being cool with a perfect duplicate of a dead guy from another world. I know as readers we’re supposed to be like “Yay, the dream of 2009 is alive at DC,” but in any other context, this situation is fucked.

Bryan Hitch tries to make it a little unfucked in “Justice League: Rebirth”, which shows the League kind of coming to terms with the new/old Superman while bringing in the new Green Lanterns and fighting a new version of Starro. I used the word “new” three times in that last sentence, so you’d think “Rebirth” would signal a bold new direction for the Justice League. It doesn’t. Instead, “Justice League: Rebirth” #1 is a comic that reestablishes the traditions of DC’s most popular team by digging down into its fundamental roots. Whether or not that’s a good thing depends entirely on your tastes as a reader.

On the positive side of things, “Rebirth” feels a lot like the first issue of Grant Morrison and Howard Porter’s “JLA” from the ’90s. After years of the Justice League being composed of characters like Booster Gold, Guy Gardner, and Blue Beetle, “JLA” reestablished the original Big 7 roster. “Justice League: Rebirth” feels like it’s doing that, insisting that the series moving forward will involve a lot of classic heroes and the blockbuster action that’s made Bryan Hitch a household name among comic fans. It has everything you could want from a Justice League comic: a massive Starro invasion, Aquaman being useless, and Superman and the new Green Lanterns saving the day. It’s not exactly reinventing the wheel, but it’s pretty solid.

That said, it is kind of disappointing to not see the waves of change DC has promised with “Rebirth” get reflected in their flagship series. I can understand why they’re more or less staying the course. Marvel reshapes the Avengers in seven different teams every eight months and it’s gotten to the point where I just assume that everyone at Marvel is on the Avengers. It makes sense to have one book with a roster that’s relatively consistent. On the other hand, it’s hard to get excited for whatever this “Rebirth” is when DC’s main team is more or less the same. I’m excited for Simon Baz and Jessica Cruz since they actually are fresh additions to the team, but I’ve also been waiting three years for DC to do anything with Baz. Hopefully this and the new “Green Lanterns” series will give them some momentum.

I’m also iffy on Crisis-Era Superman’s comeback and swift addition to the team because it doesn’t really feel like adding a new layer of paint to the team so much as peeling away what was there. On one hand, the character’s entire existence raises so many questions that it’s going to be hard to not make this the fourth book about Crisis Superman’s return. On the flipside, acting all natural about this new Superman kind of undercuts the total shock of whatever we’re calling his return. On the other hand, I do like the idea of Batman keeping Crisis Supes on his team just so he can monitor him. That’d be an interesting dynamic to build a team around.

Also, apropos of nothing and I cannot believe I didn’t mention this earlier since I got so worked up in the whole New/Old Superman thing, but this whole book’s plot is Mass Effect. Like, the entire Mass Effect franchise. Starr shows up looking like a cuttlefish monster and they straight up call it a Reaper that’s here to harvest all life. Not only that but it’s a harbinger (wink) for other cuttlefish monsters that are going to mess everyone’s life up in a few months. If you’ve never played Mass Effect before, play the first twenty minutes of the first game and you’ll see that this is kind of the same story. Honestly, I’m kind of down for it if Aquaman pulls off a Corporal Jenkins some time soon.

Final Verdict: 6.8 – “Justice League: Rebirth” #1 doesn’t do a whole lot to signal a new era for the Justice League, but there are seeds there that could pay off in the future. It doesn’t seem like the must-read series that’s going to be on the top of my pull list, but I’ll definitely check back in when the first trade comes out if there’s good word of mouth.