Tom King has been a major superhero comics writer in the most recent comics period, but this wasn’t always the case! Backtrack about five years ago, when Geoff Johns was slugging away on “Justice League” and Rebirth was something only a few characters had gone through, King was cutting his teeth on tie-ins, specifically this Green Lantern one-shot with Doc Shaner and Chris Sotomayor. Back then, this was a pretty highly-lauded single issue, but in the context of King’s popularity nowadays, does it hold up as well as it did? 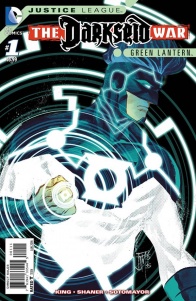 With the Green Lantern Corps threatened by a strange extinction-level event on Oa, only Hal Jordan and John Stewart remain to save the Corps–and themselves-from joining Darkseid’s army forever!

The main issue with this comic that unavoidably presents itself is that it is very top-heavy in how narratively dense it is. It’s a recurring problem with event comic tie-ins, where the writer feels pressured to catch any non-readers up with everything happening in the main story. What makes this even more annoying is that it’s very decompressed. Yet, the first few pages still feel like a slog. The police-report style narrating from John Stewart touches on some pretty emotional points in describing how the Green Lanterns were whittled down to one member by the Parademons. Unfortunately, it goes on for too long that these points don’t stand out as well as they should. This story beat is also brought up again later in the comic. Hal, in a succinct but poignant moment, asks his ring about how many beings there are on Oa vs. how many Parademon-converted beings there are. We get more of this repetitive storytelling later in a wibbly-wobbly, timey-wimey shenanigan that Hal gets up to. A whole half-page of dialogue is repeated from earlier in the most predictable way that I clocked out for a minute and just looked at the pretty art on the page prior.

With that all out of the way, there are some high points in this issue that do age well. For starters, King does have a good grasp on what makes Hal Jordan so distinct from the other Green Lanterns and manages to portray it in a single issue. John Stewart encapsulates this understanding pretty well in a quote from the first sequence of the book, saying “…I know you’ll come and you’ll fight and you’ll break.”. Hal is human and fallible, often to the point of being horribly jock-y. Yet, he knows when he’s gone too far for the sake of his own pride and is willing to take the steps to fix his own and other wrongs, and ultimately prevent more from happening. Even the flashbacks to pre-teen Hal in the church after his dad’s death made a lot of sense within the context of his character. The dialogue is wildly overwritten and has one too many uses of the word ‘like’. When you consider this is a kid trying to make sense of his effortlessly-cool dad’s death and hold onto his inner sense of bravado however, it clicks together nicely and ties everything together.

Shaner is an incredible fit for this book and the biggest reminder of why it was so highly acclaimed on release. There’s an attention to detail here that elevates the storytelling to a higher level on nearly every page. The little that we see of John Stewart is with a seemingly standard-order Lantern uniform and a very straight crew cut, which says more about his soldier-like personality than words ever could. The body language that bomber-jacketed Hal employs while talking to his child-self is perfect, especially in the slouch and hesitance to touch. Shaner goes into even smaller detail later with Hal’s powers, as they start off creative and interesting before dissolving to energy blasts the more frustrated and overwhelmed he gets. Then you get the killer splash of Hal becoming the God of Light, with huge pulp-style rings emanating outwards over succinctly detailed moments of the character’s big origin moments.

Just like King nails the characterization of Hal, Shaner understands the visual quirks that make Hal so distinct from the other A-listers. The child version of Hal works so well in this story because it encapsulates all the character’s bad traits and puts them in a separate version so that the one we focus on feels more compelling. Child Hal is always drawn in a very aggressive stance, looking like he has the potential to leap at you at any given moment. This frustration is balanced with uncertainty and sadness, especially in how wide the kid’s eyes can get. You see hints of this in present-Hal, especially as he gets overwhelmed by Parademons and has his ring telling him how futile the situation is. Shaner is adept enough, however, to seamlessly change this frustration to the classic, Indiana Jones-esque bad boy charm that you can’t help but grin along with. Even little things like God-form Hal’s amazement in seeing the stars have a great sense of wonderment that works perfectly for the character who grew up enamored by the idea of space.

Colors are handled by Sotomayor, who has a soft yet vibrant palette that highlights Shaner’s line art beautifully for this issue. Every page is infused with that bright-eyed, superheroic view of the cosmos. The Lantern greens are always contrasted against a dark or opposing color to make them pop, and glow with a plush vibrancy that isn’t eye-searing, but comforting. The splash page of Hal turning into a god has great, 60s-esque psychedelia to it, with bright yellows and pinks in the background that elevate the foreground of Hal’s Kirby-influenced transformation. Sotomayor shows great range on the opposite end by providing moody monotone orange palettes for the flashbacks, which manage to feel cathartic, angry and somehow comforting at the same time.

Whilst not everything about this issue has aged nicely, and we can certainly see the roots of some unpopular Tom King-isms here, this is still a great character study that showcases not only why Hal is such an enduring character, but why he’s so different from the rest of the Justice League. Not only that, but we’ve got some stunning art from both Doc Shaner and Chris Sotomayor that really make this one-shot a memorable one. If you ever feel the need to reread “The Darkseid War”, you can probably skip most of it and just focus on this issue: it’s easy to see how King was elevated to such popular status in the wake of this.