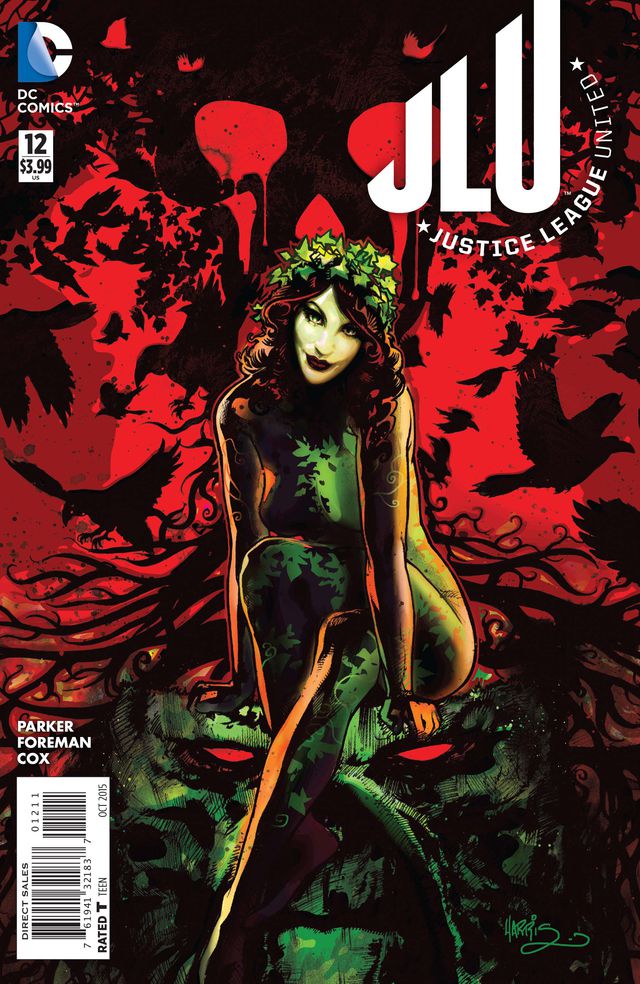 This issue of “Justice League United” wastes absolutely no time, dropping the reader directly into the crazy action with next to no warning. I’ll follow suit, but be warned that some minor spoilers will be discussed. 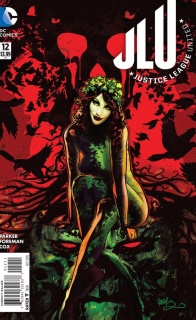 A mission to save our world from cosmic calamity has separated Swamp Thing from the Green, threatening to destroy him forever. Only an improbable team of heroes and villains, led by Poison Ivy, can traverse conflicting realities and save Earth’s plant elemental from non-existence.

The current direction of “Justice League United,” for the uninitiated, is a collection of short arcs, collecting one and done teams of various heroes and villains, put together to achieve a specific goal. This arc, which wraps up in this issue, collects Equinox, Poison Ivy, Mera, Swamp Thing, and Etrigan the Demon as the team. They are gathered together to fight a, and I’m lifting this directly from the book, “super gross living island thing in the middle of Lake Erie.”

Because of the nature of the book’s new style, there is almost no exposition here whatsoever; the issue begins exactly where #11 left off, with Swamp Thing already, more or less, off the table, and the team unsure of what exactly they are to be doing. Last month, we saw the team brought together, as well as the new role of Adam Strange as the mystical soothsayer, drawing together these various teams. This month, we get a little more information as to just how Adam got into that role, and we also saw that his visions may be correct, but they aren’t perfect.

This sort of ‘destiny versus free will’ story shouldn’t really work; if we know that Adam’s plans will always work, there is no drama. And yet, Jeff Parker finds a few ways to make both the results inevitable and the process surprising. For instance, when Swamp Thing, last issue, was absorbed into the living island, it seemed like he would be back in the action this week. Well, aside from Poison Ivy connecting with him, he’s gone – and not just gone in the issue, but seemingly lost in the world, and disconnected from the Green.

This creates actual tension and drama in the series going forward – if heroes can, and will, be getting severely changed, or at least have the potential for real consequences while on these missions, it raises the stakes quite a bit. It also allows Parker and co. the ability to act as a retcon machine, setting up characters for either a new status quo or a full on change in direction. The issue ends with Poison Ivy taking Swamp Thing and trying to rehabilitate him. Is this setting him up for the new Len Wein-penned “Swamp Thing” miniseries? It would certainly be convenient, for DC’s sake, if the character was more of a tabula rasa, letting Wein do whatever he sees fit.

Part of what makes the issue, and the series as whole, so fun is that Parker is able to construct scenarios that only make sense/can be solved by these seemingly random combinations of heroes/villains. However, that is also part of the problem; some of the fun of a mystery/adventure story is to try and guess what will happen next, or theorize how the heroes will get out of this jam. Because of the extraordinarily specific roster, it can be challenging to have as much fun with this – it either becomes very clear what will happen (like Etrigan using his fire, or Mera using her water powers), or it is so obtuse that it seems like a deus ex machina.

This is undercut by the incredible art that Travel Foreman brings to the table. Foreman, who won over the hearts of many DC fans when he was on “Animal Man” with Jeff Lemire, can do some of the more insane art in all of mainstream comics, and this issue is no different. I can think of no one else in comics who is better suited to draw a disgusting living island than Foreman, and his scratchy, purposefully ugly storytelling works perfectly for a story like this.

What makes it even more impressive, however, is how he can also turn off the ugliness when he needs to, like when he shows Alanna talking to Steel – suddenly, in the confines of the laboratory, everything is clean and organized, and then we step outside of that world, and chaos is everywhere again. Foreman’s art, especially during action sequences, also gives off a real sense of effort; that is, the characters always seem like they’re breaking a sweat. This isn’t Superman letting a crook shoot him in the chest, smiling, this is Poison Ivy losing her shit and trying not to die.

Foreman’s just about the only artist in DC’s stable who would be as much at home drawing Etrigan and a Swamp Thing-possessed Poison Ivy, and that is because his versatility is such an underrated part of his game. He is also a master of perspective, and uses a few pages to remind readers the scope of the story being told, pulling back off the inner thoughts of Ivy, to the conversation she’s having, to the surrounding areas, all the way to the whole island about to take flight. Foreman doesn’t want the reader to forget that this is a battle being waged on multiple fronts, and does so in such ways that it allows Parker to tell his story, and not worry about catching the reader up on the bigger picture.

As mentioned earlier, this issue also acts as a prequel for the next arc’s team, as we see Steel, Robotman (!), and Batgirl recruited for a new mission. With a book this sprawling and different, arc to arc, you need to give the readers some incentive to tune back in, but I wonder if this story suffered a bit from having to sacrifice four pages to introduce the next chapter. I suppose you can claim that the $3.99 pricetag allows for more pages, so this shouldn’t an issue, but I still think the point is valid.

One of the smartest things that DC has done in the last few years is produce those 8-page “Divergence” previews of their new and returning series. The problem, however, is that some of the series, including “Justice League United,” haven’t quite lived up to the standard produced in that preview. I am talking, specifically, about how much fun that preview felt. It felt the most hopeful and joyous that the New 52 has ever been, and it had me so unbelievably excited for the book, even with knowing very, very little about it. Well, now we know more about it, and the book just doesn’t have the same joy that the preview had.

Now, part of that is because we now see the real stakes at play here, but I still think that both tones can work together, even if it will take a little work. The beauty of keeping Alannna, Animal Man, Equinox, and Stargirl as the leads is that they are such a positive group – there isn’t a glum member in there. They represent such different styles of heroism, too, that the team’s diversity is always at the forefront.

When the preview was released, the DC3 compared it to the Jonathan Hickman “Avengers” run, and this truly feels like a Justice League world. However, it skipped directly from the fun recruitment issue to the ‘Illuminati playing chess with human lives’ of “New Avengers” without a real chance to let the novelty of the status quo get any play. However, next month’s lineup seems more lighthearted and heroic than this, admittedly, quite dark start to the book. Here’s to hoping that Parker and artist Paul Pelletier can find a tone that suits the team as well as Parker and Foreman did for this arc, but with a little more sunshine.

Final Verdict: 7.2 – A book that has the potential to grow into something absolutely special – and hopefully will, in time.