After an ignoble exit, the Legion of Super-Heroes returns to the DC universe in the fun and supersized “Justice League United Annual” #1. 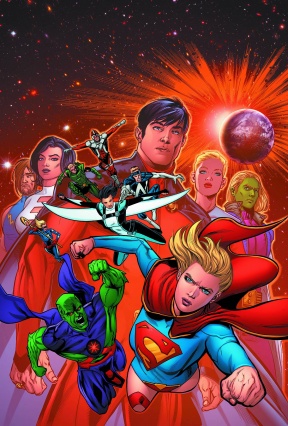 The Infinitus Saga begins as the Legion of Super-Heroes arrive with the shocking news that the 31st century has been destroyed! Now it’s up to the Justice League United to save the future!

It might be hard for young whippersnappers out there to believe, but back in the old days of the New 52, the Legion of Super-Heroes had their own self-titled series. It even lasted 23 issues before getting canceled due to low sales and no one being able to figure out what was going on. When rebooted, it seemed like the Legion, and their decades long continuity, remained virtually identical, which seems to fly in the face of the supposed “new reader friendly” mantra being touted by DC at the time. With over a year out of the limelight, Jeff Lemire and Neil Edwards have teamed up to bring the Legion back, and are doing it in the enjoyable and fun confines of the “Justice League United”.

The JLU team has been split up, with half back at home base, while the other members are thrown halfway across the galaxy. Green Arrow, Supergirl, Stargirl and Animal Man are chasing the remains of Hawkmen. Martian Manhunter, Equinox and Alanna Strange are on earth with the young alien named Ultra, who keeps growing older at an exponential rate. And just for fun, Alanna and Adam Strange keep getting teleported between the two. Things finally seem to be calming down on Earth, when Mon-El, member of the Legion and descendent of Kal-El, blasts through time on a mission to kill the young Ultra. Let the exposition begin!

Part of what lead to the cancelation of the New 52 “Legion” series was that the tone didn’t really fit in with any other book at the time. It was a big space opera, similar to the “Green Lantern” family of books, but one that could not be so easily made grim and gritty. With their bright colors and outlandish names, the Legion just seemed a little too goofy for the DCU. What Jeff Lemire has done with “Justice League United” is create a place where it’s safe to have big superhero adventures that have drama and stakes, but also have a sense of humor. The Legion fits right in with the JLU and even a borderline psychedelic flashback does not seem that out of place.

The action kicks in quite early in the issue, which is immediately offset by pages and pages of exposition. To be fair, Lemire was handed the task to reintroduce a new team of heroes and new alternate/possible future timeline, but wow did it require a lot of explanation. The fact that the creative team has the extra pages of an Annual to work is the real saving grace of the story, as it provides them with enough room to at least show scenes from the Legion’s backstory, and avoid doing it through dialog alone.

Lemire has a real knack for strong character moments. Even the JLU and the Legion seem to get stuck in a cycle of excessive talking followed by punching, Lemire evokes strong characterization. Mon-El grief-fuel determination, Martian Manhunter’s equally strong resolve, Brainiac 5’s pleas for logic, Green Arrow’s struggle to assert leadership, and Animal Man’s quest to make it to his kid’s recital keep the story from becoming non-stop flashback and fighting.

Unfortunately, even these moments aren’t enough to keep Green Arrow and co’s outer space story from feeling like overkill. In an issue with new heroes and timelines and supervillians, introducing Byth as another bad guy and presenting another mystery in the fate of Hawkman crosses the line into just sheer confusion for the reader.

Neil Edwards make his “Justice League United” debut with this annual and, aside from a couple of hiccups, he mostly impresses. The somewhat cartoonish style of Mike McKone has been replaced by a much more realistic look. Luckily, Edwards avoids attempts at gritty photo-realism, and retains a slightly stylized look. Edwards should be commended for his character design, as there are at least a dozen previously unseen characters in this issue. The future setting could have given rise to real dopey looking costumes, but Edwards actually creates a rather unified look for the croup. Colorist Jeromy Cox deserves special mention, as his liberal use of bright colors keep the rather dark subject matter from turning the book into a gloomy read. The double page spread featuring the Legion in full attack mode is quite impressive. Edwards and Cox combine to make a very vivid scene out of a group of people in near-identical flying poses. And at least it suggests that the DCU has a more colorful future.

Coming in at over 40 pages, there is a lot of art in this book, and there are a couple of moments where the cracks start to show. The first appearance of Mon-El poses the character in such a way that he looks about 10 feet taller than everybody. For most of the issue, Edwards creates detailed background settings and characters, but there are moments where things get noticeably blurry. The flashback scenes actually benefit from the art, and it distracts from the sheer amount of words on the page. Edwards has some room for improvement but the art in this extra sized issue shows a lot of potential for the next regular installment.

SLIGHT SPOILERS IN THIS PARAGRAPH. The introduction of Infinitus into the DCU is sure to draw some comparisons to a certain purple planet-eater over at Marvel. While cynics might call this just a copy of a famous villain, if there can be Darkseid and Thanos, Batman and Iron Man, Green Arrow and Hawkeye, Captain Marvel and Captain Marvel, surely there’s room for another hungry cosmetic entity. Lemire uses the character to raise the thought-provoking, if somewhat common, question of “if you had a time machine, would you kill Hitler/Stalin/whoever-decided-that-microwaves-can’t-have-a-silent-mode?”. It is a clever way of positioning the Legion as antagonists without make them straight villains, while instantly endearing the young alien Ultra to the reader.

“Justice League United” Annual #1 is quite ambitious, to its own detriment. With the new characters, all the expositions and the Arrow-led team’s planet hopping side adventures, it’s just too much going on all at once. The return of the Legion of Super-Heroes is a welcome development and they fight much better into “United” than in their previous New 52 incarnation. Lemire fills the issue with fun and interesting character moments, and Edwards’ art makes the long flashbacks much more interesting, but readers will find it hard to keep track of everything going on. There is a lot of fun adventure to be had, just don’t try to understand everything.

Final Verdict: 6.9 – Lemire and Edwards swing for the fence, and bit off just a bit more than they could chew. Now that they have dispensed with the long backstory, hopefully the next issue can be a bit more focused.