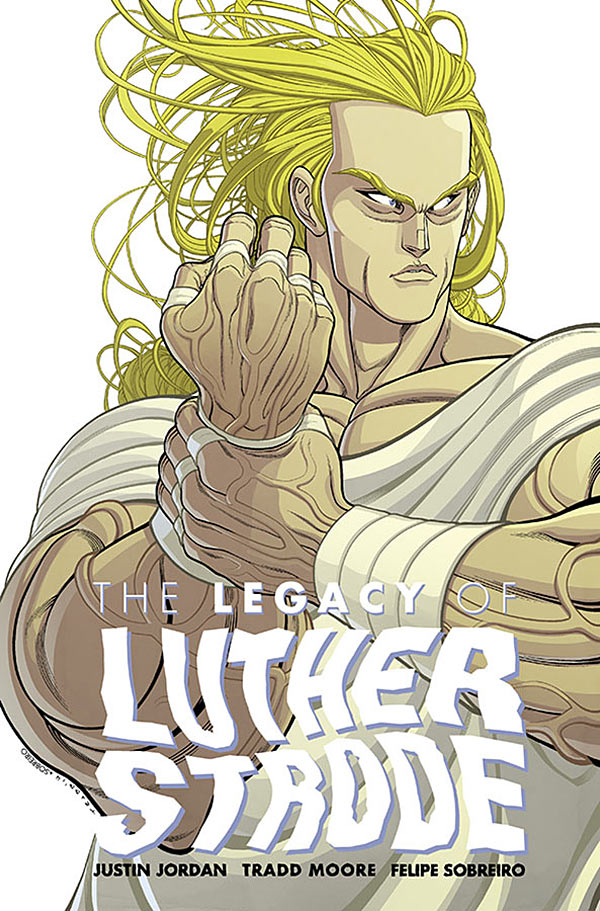 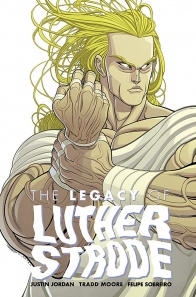 For five years, Luther Strode and Petra have been on the run. Now the time for running is over, and the Murder Cult is going down. The road to Cain starts here.

“Legacy Of Luther Strode” #1 is a very interesting beast. One of the things I think about a lot when reviewing comics that aren’t first issues is “How would this play if this was the first issue I’ve read of this series?” Oftentimes, it becomes a mess of not knowing who characters are or what’s happening as most comics tend to assume you’ve been reading since the beginning and even issues branded as the beginning of new story arcs and jumping on points are reliant on what came before. “Legacy Of Luther Strode” #1 doesn’t even bother with that as it pretty much requires you to have at least read “Legend Of Luther Strode” before starting this issue. While the first issue of “Legend” did its part in explaining to readers what the deal with Luther is (as he wasn’t really the emotional focal point of that series anyway) and worked well enough on its own without the reader having to have “Strange Talent”, this issue isn’t like that.

After a rather cryptic opening detailing the history of a certain mythological figure that I’m sure will come into play in later issues, but as of right now really works to set the tone for the issue in terms of destruction, Jordan and Moore jump straight into the epilogue to “Legend” that was released online titled “The Bridge”. When this sequence was released online, I wondered whether or not it would be included in this issue and I’m glad it was as it really does serve as the bridge between “Legend” and “Legacy” and the issue would not be what it is without it. However, by including it and having this issue segue directly from the end of “Legend” into where Luther and Petra are now with the assumption that the reader knows the ending of “Legend” and so they understand what Luther and Petra are up to now and why shows that Jordan and Moore are no longer interested in coaxing new readers into this world. This is the final act, the final chapter in Luther Strode’s story and this is for those who have stuck with Luther from the very beginning.

And if you have stuck with Luther since his beginnings as a skinny, bespectacled high school nerd, then this issue has a lot of subtle payoff for loyal readers in terms of Jordan’s writing. One that really got me was how Luther’s characterisation has swung around completely from oft bullied nerd living in fear of a fresh out of jail abusive father who gains superhuman strength and uses it to protect his family and friends at great cost into a vengeful force of nature who’s the scourge of the criminal underworld and now into this pensive, almost remorseful Superman who carries the burden of this great strength and wants to help people and is genuinely upset when that’s not an option. It’s the kind of moment when you see all the strings and all the things that happened to the character leading to this one point where Justin Jordan’s concise character writing and Tradd Moore’s surprisingly subtle character expressions meld and you can’t help but feel for Luther. That’s what “Legacy Of Luther Strode” is really built on: it’s not the incredible fights or the insane violence, although they are pretty fun, but the complex emotions that Jordan and Moore have peppered this narrative with that make Luther Strode such an interesting read.

Speaking of incredible fights, though, this issue may have the best of the series’ so far. Sure, the fights with the Librarian and Binder and even Jack The Ripper escalated in ways that wowed because of how crazy and experimental Tradd Moore and Justin Jordan got in how to stage the fight, but this is something else. After the three scenes that ease the reader back into the world of Luther Strode and bridge the gap between this series and the last and establish where Petra and Luther are now, Moore and Jordan then dedicate the rest of this forty page issue to this fight. And it is glorious. Kicking it off with a page that frames a conversation with a view of how the fight could go in a wonderfully unique four panel piece before really started things with a bang (literally), this fight is a non-stop, no holds barred, knock down brawl that shows just how far Tradd Moore has come as an artist.

This fight is what Man Of Steel wanted to be. This fight is what The Matrix Revolutions could have been if visual effects technology was just a little more advanced in 2003. A while back I bemoaned the fact that western comics had a tendency to lack the scope of manga and here comes “Legacy Of Luther Strode” #1 to tell me to shut my mouth and enjoy the best “Dragonball Z” fight that never happened. The thing that really impresses about Moore’s artwork in this issue is that this is essentially Luther fighting himself. The other combatant doesn’t have a different expertise in fighting like Binder or Jack The Ripper and isn’t wildly outclassing Luther like the Librarian did and so it’s a pretty even fight. What that means is that Moore and Jordan have to get inventive to keep the fight interesting and, boy, do they. Using the entire city as the fight’s playground, Moore brings a surprising amount of fluidity and grace to such a display of strength that it becomes almost like a ballet. There’s a quiet serenity in how destructive this fight is.

And it’s not just a matter of destroying everything in sight, either. The moments in which Moore pulls back into a wide shot to show these characters traversing the city is just as impressive as the panels where the borders warp in response to a character landing and creating shockwaves through concrete. This is the fight that is culmination of everything not Luther has learned in his time, but what Justin Jordan and Tradd Moore have learned. Through on top of that Felipe Sobreiro’s colours that bring vibrant life and energy to the scenes with bright blue skies and green shrubery juxtaposed to violent orange and red backgrounds whenever a true feat of strength occurs and this is the ultimate Luther Strode fight. The most impressive part of this fight will be seeing how this team tops it in the issues to come.

All this is to say is that Justin Jordan, Tradd Moore, Felipe Sobreiro have done it again with “Legacy Of Luther Strode” #1. Sure, this is the issue for the loyalists and the team wisely decides to assume that if you’re not on board by now then there’s not a lot they’ll be able to do to change your mind. By taking that approach, they’re able to begin paying off emotional threads that have been in play since the first issue of “Strange Talent” in terms of Luther’s characterisation as well as dedicated the majority of this oversized issue with a fight scene that is sure to delight anyone who loves Luther Strode. “Legacy Of Luther Strode” is the beginning of the end for the big, blond lug, but it’s starting off with a bang and I can’t wait to see where it goes next.

Final Verdict: 9.5 – If you’re not a fan of Luther Strode already, this issue won’t change your mind. If you haven’t started and you want to, this isn’t the place to start. But if you’re like me and you’ve been following this story since its inception, then this issue is just for you.