After a little hiatus, “Karnak” is back with a vengeance on his one man crusade, carving a physical and philosophical path through the murky backwaters of the Marvel Universe. 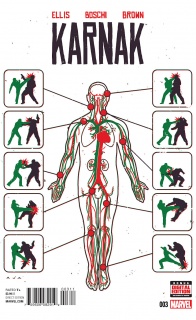 Just when you thought Karnak couldn’t get more intense and insane, it does. The trail left by the kidnapped Inhuman gets nuclear and Karnak is caught in the mushroom cloud.

Karnak was one of the books I was most anticipating in the wake of the “Secret Wars” reshuffling. Warren Ellis tackling obscure and underutilised characters is kind of my jam, and so, while my thoughts go out to artist Gerardo Zaffino, who’s apparently taking time off the book to deal with personal issues, I was really glad to see that this weird little side-title had managed to make it back onto Marvel’s April solicitations.

Karnak has been tracking a mysterious NuHuman (a phrase that has been conspicuously absent from Ellis’ scripting thus far) who’s been kidnapped by a splinter cell of AIM who are somehow even more zealous than the science-worshipping fanatics core collective. Karnak tracked down a priest who was convinced the child is some kind of messianic figure. After torturing a cryptic phrase out of the man, “Karnak” #3 is mainly concerned with Karnak’s journey to Transia, in search of the eerily named Chapel of the Single Shadow. This is by far the slowest issue of the three we’ve seen so far, with Ellis taking a lot more time to establish a strong philosophically-edged mystery not dissimilar to his work over at Image on “Injection”. The storyline itself is one of the cleanest and most initially straightforward-seeming that Marvel are working on at the moment. Each issue so far has seen Karnak in the almost identical situation of travelling to an AIM safehouse with Coulson and Co in hopes of finding either the boy himself or some information about him. Any and all hints at a more complex background to the narrative occur in the corners of the issues, allowing us to experience Karnak’s singleminded nature. This issue offers up a little less action than the previous two, but replaces it with more high-minded dialogue, sounding out the situation at hand in a little more detail and giving us some more in depth characterisation through several conversations between Karnak and other characters.

As I mentioned, there is a lot of dialogue in this issue. For me, some of it works really nicely, and some of it, less so. Ellis’ incarnation of Karnak is still evolving, and as he becomes more sure of himself and his surroundings he’s graduated from meditative monk to more of a frustratingly cryptic philosopher. His opening monologue in this issue reflects on his personal believe in a three-part way of looking at the world, and it feels decidedly less focussed than some of the other offerings we’ve had from him in earlier issues. There’s a spikiness to his interactions in this issue that almost feel callous at times, especially in the final few pages when he responds, with a quip, to a suggestion from one scared SHIELD operative that he might actually be the devil. That being said, I am really enjoying the contrast in speech patterns and almost visible distinctions in thought processes Ellis is offering up between Karnak and the rest of the characters in this book. There’s something recognisably un-human about his take on the Inhuman mind, and I think that disparity is something that should be being explored more in the other Inhuman titles.

Boschi’s been given the reins to the art on a difficult issue. “Karnak” #3 opens with a furious and visceral fight sequence that plays out over about six pages, but there’s nothing quite as gripping in this issue for him to sink his teeth into. Instead, he sets about establishing a tone of creeping unease through unusual panelling, purposefully uncomfortable close-ups, and canted angles that keep the reader on edge and engaged right up until the action on the final few pages. Boschi’s facial work is strong, although sometimes feels a little melodramatic, and his execution of Karnak leans a little closer to smug than satisfied at times, with a semi-permanent smirk on his face that seems a little out of character. His landscape work is much more impressive, and as the SHIELD helicarrier sails over the borders of Transia we’re gifted with a series of beautifully off-kilter establishing panels that build the weirdness of this place with a believability that really gets under your skin. Boschi’s simple, monolithic translation of the Chapel itself reads like something from an F.W. Murnau film, and that Gothicism carries through into his execution of the shambling hordes that Karnak is confronted by at the end of the issue as well.

This book is a brilliantly gripping mystery tale. Ellis has managed to pitch a story that feels just the right size for a single character with a specific skill set, and Karnak’s unique detective brain means that leaps of logic and revelations abound without feeling expositional or unearned. The pacing is spot on, and all the isolated, pre-battle chatter serves only to build the anticipation for Karnak’s inevitable eruptions. To me, this book is like some of the best “X-Force” stories, with a sprinkling of Ellis’ signature brand of introspective esotericism. Boschi has stepped into his new position well, and I’m really looking forward to seeing what he brings to the table when he gets his hands on some more meaty, physical scenes.