I’ve been looking forward to Ferrier and Bayliss’ latest offering since I saw some preview pages in the back of another Boom title a few months ago. Whoever it is they’ve got handling their marketing definitely knows what they’re doing, because while the cover of “Kennel Block Blues” #1 might be almost too abstract to reel in the masses, it only takes a couple of pages before you’re well and truly hooked. 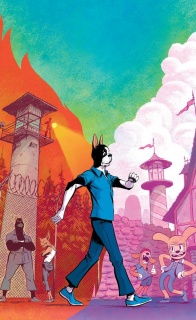 Oliver is a good dog. A family dog. But without warning, he’s sentenced to Jackson Kennel, where he’s instantly placed on Death Row with the rest of his fellow inmates, awaiting a lethal appointment on The Table if salvation doesn’t come. He’ll need help escaping the Kennel, but when the stress of prison life builds, he starts escaping reality instead, imagining a fantasy world of cartoon friends. It’s time to break out…into a musical number?”

The premise is a relatively simple one, and, on the surface of things, Boom‘s solicit seemingly sums it up pretty well. But like so many great books “Kennel Block Blues” excels not in its conception, but in its execution.

Ferrier seems to have been gunning for dizzying and disorientating from the first page, and the distorted double reality of issue one definitely delivers in that respect. The issue focuses on wrongfully convicted pup Oliver’s first day in the slammer, and it’s clearly no place for a house pet. Ferrier’s interpretation of prison life is grim without feeling needlessly gritty, and, while it leans on some of the more standard tropes of all prison drama (intra gang disputes, contraband smuggling, and bullying the new inmates to name a few) he manages to inject new life into these techniques  by viewing them through a cleverly constructed canine filter. His supporting cast are also recognisable staples of the prison genre, but Ferrier’s deft characterisation means that dogs like the mountainous Cosmo or yappy Sugar, who could’ve ended up as thin clichés, feel far more fleshed out.

As previously mentioned, “Kennel Block Blues” grips from the first few pages, and its instantly interesting appeal is due in no small part to Bayliss’ hugely inventive art. The opening few panels are a psychedelic Saturday morning cartoon (rendered in glorious technicolour by Adam Metcalfe) before Bayliss pulls off the closest thing to a smash cut you’ll  see in comics, hitting both Oliver and the reader in the face with the unavoidable presence of ‘Jackson State Kennel’.

Bayliss’ character work is so sharp that he definitely deserves credit when it comes to building the foundations of relationships that will develop as the series progresses. His collection of colourful pets, with their nuanced facial expressions, make for some surprisingly touching moments throughout, and more than earn the self comparisons to anthropomorphic powerhouse Juanjo  Guardino’s work on “Blacksad”.

What really makes this book stand out from the pack (pun definitely intended) is the secondary filter of Oliver’s own invented reality. This book is a great example of the unique benefits of the comic book medium. There’s no other format that could deliver the glorious jarring dichotomy of Ferrier’s protagonist’s fractured mindset so fluidly. Ferrier manages to script these breaks as both entertaining and tragic, with an underlying desperation that permeates the Saturday morning cartoon pep and leaves the reader both laughing and wincing.

While “Kennel Block Blues” is, ostensibly, a prison drama, there is a distinct element of mystery at play that means that this first issue asks a lot more questions than it answers. This first issue clips along at a great pace, barely stopping for breath in a way that feels like it mirrors Oliver’s own uncertainty with the situation. Throughout the issue we see glimpses of the wider world at Jackson through Oliver’s innocent eyes, and it’s clear there’s something much more going on underneath the surface. With only four issues to play out the full story it almost feels as though Ferrier and Bayliss are offering up too many potential avenues to explore, but it’ll definitely be interesting to see which they choose to develop further.

Final Verdict: 8.8 – There’s  a tragi-comic  brilliance to this genre-bending first issue that keeps you on the back foot until the final page. As unique a book as you’re likely to read this year.