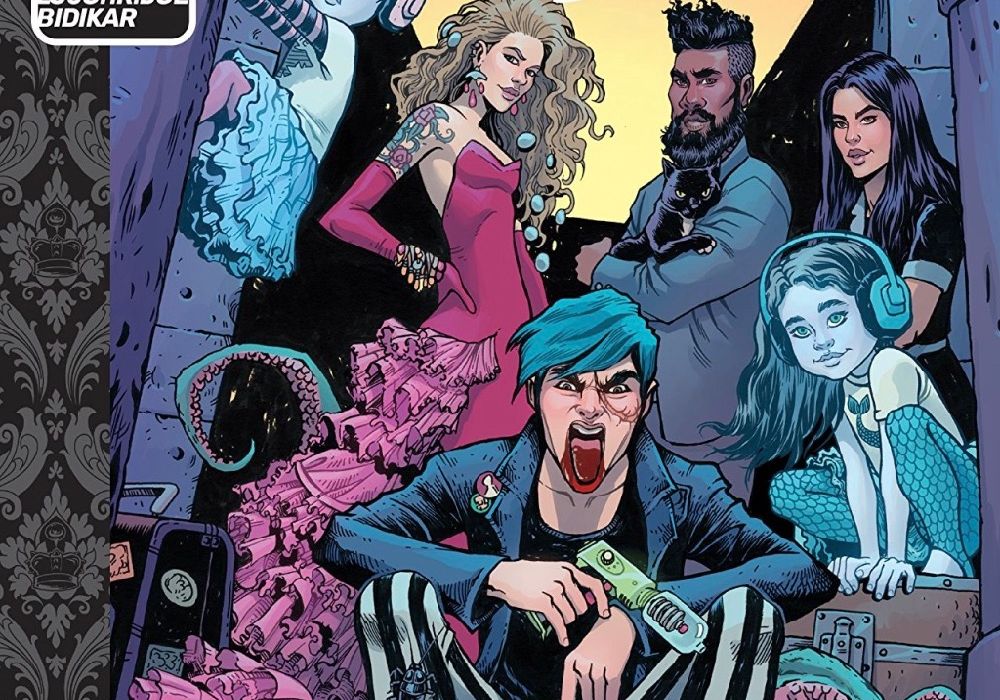 After months of build-up, the debut issue of the debut series from Shelly Bond’s new creator-owned imprint with IDW, Black Crown, is finally here. Welcome to the cross street of comics and chaos. 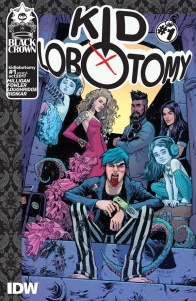 Kafka meets King Lear by way of Young Frankenstein in KID LOBOTOMY, a dark, demented, monthly satire that follows a dysfunctional family of hoteliers. Will sibling rivalry, seduction, and shapeshifting eventually lead to sanity or salvation?

For many comic book fans and critics, the release of “Kid Lobotomy” #1 — and everything it portends — is nothing less than the publishing event of the season. Needless to say, that’s a crap ton of pressure to put on writer Peter Milligan, artist Tess Fowler, and everyone else involved. Not only do they have to deliver a unique and exciting product that stands up on its own, they also must make the first foray into defining the nascent Black Crown aesthetic and realizing its brand proposition. Trite as it may be, it’s true, you never get a second chance to make a first impression.

Fittingly, the very first panel of the very first issue overtly alludes to literary iconoclast William S. Burroughs and his Dada inspired “cut-up” technique. Clearly, this is a book (and an imprint) that isn’t going to bother to shy away from its creative influences, much less try to disguise them. Rather, the unapologetically well-read creative team have brazenly plucked bits and bobs from Burroughs, Kafka, Shakespeare, and whatever other shiny objects they spied along the way, mashed the pieces together, cut them up again and craftily reassembled them on the pages of this rather peculiar, but nonetheless truly stunning, pop culture artifact.

Unmistakably, this feels like an event as much as it does a comic book.

The story itself is essentially told from the perspective of Kid (as he’s affectionately known), a rakish former guitarist and med school drop-out with a Franz Kafka obsession and an unhealthy fixation on playing the harp until his fingers bleed. Unsurprisingly, he looks, acts and feels like the alter ego of the book’s creators. He may dress like a wannabe rock star, but he sounds like a professor of film theory or semiotics. Oh yeah, and he’s not exactly what you would call a reliable narrator. Hence, much of what we see – whether in flashback or the present – is the rather baroque byproduct of Kid’s febrile imagination. So whether it’s swarms of cockroaches, a four-eyed fish hovering in mid-air, or his sister’s naked body beside him in bed, everything must be taken with a grain of salt. Quite often, in fact, the pictures that we see completely contradict Kid’s narration, underscoring the fact that perception and reality can be two very different things.

In fact, even though the story is told to us by Kid, it’s driven by his ruthless sister, Rosebud. Whether on a whim or by design, Big Daddy (the siblings’ larger-than-life patriarch), has decided to divide his enormous hotel empire between his two offspring, beginning with The Suites (Kid’s childhood and current home), which he offers to give to his son despite his daughter’s protestations. At first Kid politely declines, but then slowly changes his mind, immediately setting the plot in motion, even if at this point Kid seems blissfully unaware of his sister’s nefarious machinations.

Clearly, there’s a lot going on here (and that’s just scratching the surface). Everything we see exists on multiple planes at once, laden with meaning and subtext. The obvious danger, of course, is that the various threads ensnarl, becoming a tangled, incomprehensible mess – high concept with poor execution.

Thankfully, Tess Fowler’s lush, intuitive visual style – mixing truly fantastical, richly detailed tableaux with occasional, well-timed bursts of surprisingly linear panels – keeps Milligan’s potentially sprawling script in check, artfully driving the narrative forward by revealing and concealing the right images at the right time. In fact, her canny ability to uncover multiple layers of backstory in a single frame – or even a single image – is huge part of this book’s success. It also allows Milligan to do more by writing less. With Fowler carrying the load, he doesn’t have to craft an overwrought backstory that describes the taboo relationship between Kid and Rosebud. Instead, he can simply have Kid say (in a rare moment when he seems to be lucid), “Then my sister appears out of thin air and does something she hasn’t done in years,” and Fowler takes it from there, unambiguously revealing the true nature of the siblings’ relationship with each other, or at least the way it plays out in Kids’ addled brain.

Lee Loughridge’s incredible colors also provide a nice through-line. At first glance, they may seem somewhat arbitrary, but by tightly constraining the palette within each scene and beat, he subtly signifies the passage of time. You can almost watch the paint on the aging walls of The Suites continue to fade and peel as you turn each page. By the time we reach the end, he’s seemingly used every color at his disposal, and yet it never feels gratuitous or haphazard as we slide from one desaturated tone to the next in a near constant wash of color.

To call this debut “ambitious” is a definite understatement. The world that Milligan and Fowler have wrought is decidedly unique, mysterious and multifaceted, fraught with possibility and absolutely bristling with the “rock and roll swagger” that Shelly Bond promised. At the same time, we’re just getting started. All of the trappings are certainly here, from ghostly apparitions to a mysterious shapeshifter who shares the name of the real life Franz Kafka’s sister to “plastic neon drillbit laser propane rayguns.” Still, amassing the pieces is easy. Almost anyone can do that. And with the narrative poised to go in any one of a hundred directions, it’s not the pieces that matter, it’s the assemblage that counts.

Final Verdict 8.3 – The needle is on the record and the first track is a banger. Let’s get this party started.