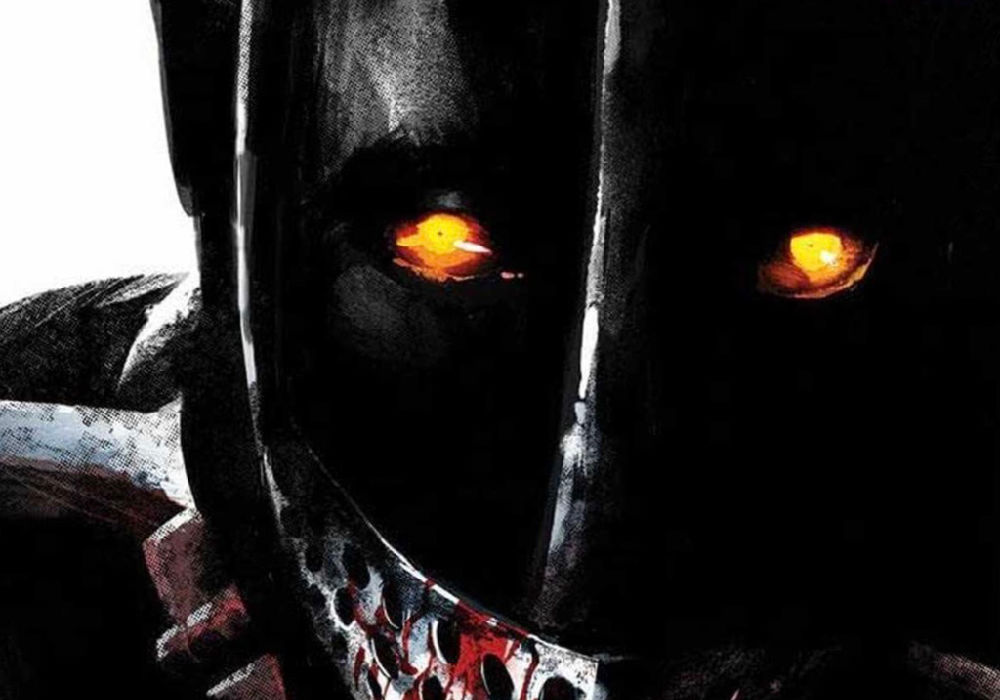 With arresting imagery that brilliantly interweaves imagined and historical terrors, “Killadelphia” #7 unleashes a new series arc that’s not for the faint of heart. (Warning: may contain minor spoilers.) 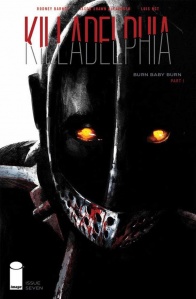 “BURN BABY BURN,” Part One. The critically acclaimed, bestselling series returns to terrify! From the minds of RODNEY BARNES, the writer behind such hit shows as Marvel’s ​“Runaways” and STARZ’s ​“American Gods,”​ and JASON SHAWN ALEXANDER, the artist who redefined SPAWN for a whole new generation, comes a horror tale you CANNOT miss! As Philadelphia struggles to recover from one of the most brutal bloodbaths in its history, Abigail Adams sets into motion a sinister plan over 200 years in the making. Will J.J. be able to stop her without putting those he cares about in danger? Or will her twisted games prove deadly for everyone he holds dear?

First off, I’ve got to come clean: I trade-waited on “Killadelphia” issues 1-6. The debut installment blew me away, but I wasn’t able to stick with the series in real time. Like so much else in the past six months, it got away from me and I simply couldn’t keep up. As a result, I only read “Killadelphia Vol. 1: Sins of the Father” a few short days ago in preparation for this issue.

I point all this out to suggest, yeah, I’m a little impatient. I thought the first arc was great and I can’t wait to see where the story takes us. I’m also a little leery. For a whole host of reasons, it seems like the first number in a book’s second arc is often the most difficult to get right. Too much recap and things bog down. Not enough and new readers are lost. Generally, in this case, “Killadelphia” #7 strikes a nice balance, moving the story forward in a whole new direction while simultaneously building on the world we already know, especially the key characters and their relationships.

Also, the artwork is as brilliant as ever.

While the underlying visual layer tends to read exactly like what it is – a beautifully stylized contemporary comic – there’s a different visual grammar in the various layers on top. Some elements read like collage, while others almost feel photorealistic, like faded black and white prints found in a box in the attic, brittle from the dry heat. Still others invoke street art or 19th century book illustrations, not to mention sculpture.

Much like Rodney Barnes’s intricate, surprisingly nuanced story, Jason Shawn Alexander’s lines and Luis NCT’s colors create a fraught amalgamation of historic and modern day terrors, interweaving imagery from 400 years of racial injustice and colonial oppression. Here, the creators lay bare all too often bowdlerized details of chattel slavery that can and should make your skin crawl and the hair stand up on the back of your neck.

It’s a metaphor, but it’s not. And that is scary as hell.

No longer terrified by even the most relatable 21st century vampire driven mad by a virus with no known treatment? Take one look at Jupiter’s halo, think about the fact “he’s grown quite fond of the device” — at least according to our third president, slave owner Thomas Jefferson — and “voluntarily returns to his subjugation” once his daily tasks are complete. Sit with all that a moment, stare at the heavy iron contraption, imagine its weight and its thickness, then tell me you don’t get chills four pages later when Jupiter’s rage is unleashed.

Artistically, the core components are all quite simple – motion lines, great perspective, intuitive paneling that leads your eyes across the page with unforced efficiency. Together, it’s simply stunning and unsettlingly visceral.

Elsewhere in the story, there are quiet moments of introspection, uncertainty and even connection. In a brief, sepia-tinged scene intercut with blood-soaked flashbacks, Jimmy and Jose sit on the bed, wondering what they’re doing. Barnes’s dialogue is terse, but no less powerful. “I want this to work,” Jimmy says. “Me too,” Jose replies. And we know those simple words represent years and years of painful backstory.

Ultimately, despite the sharp, glistening fangs and numerous blood-spattered panels – including a final, climactic splash page with horrifically brilliant framing – the “drama” is less about unquenchable vampiric thirst than it is about confusion, fear and panic in the minds of the ones who thought they were safe from harm. In that sense, there aren’t any big new reveals, or even necessarily a whole lot of action. Instead, there’s a palpable mood of armies preparing for battle and dark forces amassing beyond our field of view. As Sangster says right at the start, “I know they’re out there. Not the pawns that slither through the cracks of low places. I’m talking about the big boys.” Without question, the war is coming and it will be a reckoning like no other.

Final Verdict: 9.3 With artwork that’s as brilliant as ever and a creepy, nuanced script, “Killadelphia” #7 kicks off a new series arc in spectacular fashion.