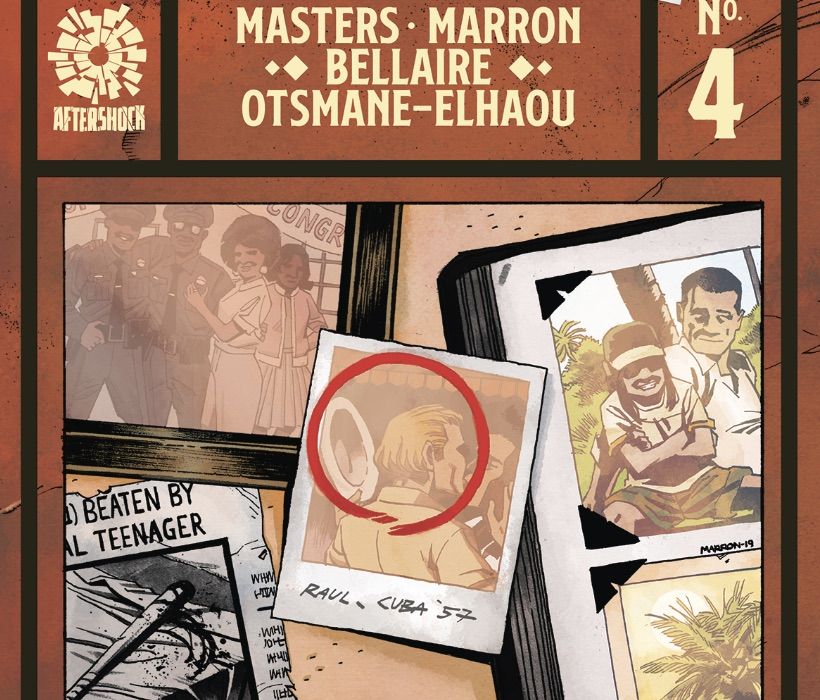 “Killer Groove” #4 digs into everyone’s past to try for some overdue character development, but doesn’t hit its mark. Warning: spoilers ahead. 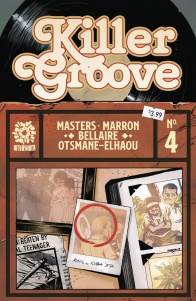 Cover by Eoin Marron
Written by Ollie Masters
Illustrated by Eoin Marron
Colored by Jordie Bellaire
Lettered by Hassan Otsmane-Elhaou As Jonny’s life of crime takes him to a much darker and more violent place than he’s been before, we explore how the past shapes who you are. For good and for bad… From Ollie Masters (The Kitchen, Snow Blind) and Eoin Marron (HER INFERNAL DESCENT, Army of Darkness, James Bond) comes the next rock’n’roll sensation, with a beat that’ll kill you dead.

“Killer Groove” #4 takes a breather from what should be a taut first three issues to delve into backstory. Unfortunately, the action to date has been stilted and cluttered, so this interlude and its attempt to ratchet up drama by pitting Jonny and Raúl against each other falls relatively flat.

Masters and Marron should have a winning concept here – a rockstar who’s also a hitman, a private eye who’s on the edge of more danger than she realizes, an orphan with a tough-as-nails attitude and a fugitive uncle with a secret who’s more than capable of violence himself should add up to the kind of grit and fast-paced crime action we’d expect from a book like “Killer Groove.” Unfortunately, there’s a lot of tension missing on the page. Some of that is down to Marron’s line, which is loose enough to get at that grit but doesn’t add too much visual depth or drama in backgrounds or controlled character details. A lot of it is down to Masters’s straight-ahead characterizations and methodical progression through the book’s plot. Notes are hit and feel like they’re there to be hit – Jonny’s drug use, the repetition of the bat, the flashback structures – but each element feels too intentional and too self-aware. An audience either needs to find an in through a character to care about or despise everyone so thoroughly there’s heat and friction in the storytelling experience, and “Killer Groove” is situated in a bland middle ground. Everyone’s kind of a jerk, but not enough of one to really pack a punch or sustain much interest.

Marron’s style isn’t necessarily one that works for this book. It’s distinct, but the characters are just a touch too squat, angular and cartoony to sell the hard-boiled edge Masters wants to evoke. Marron struggles occasionally with depth in panels, and that problem’s made worse by the muted flashback scenes. It can be difficult to track action or a change in speaker from panel to panel because there’s little detail to differentiate character faces or locations. Still, Jonny’s compelling as a small man in a big, nasty world, and a lot of that is down to Marron’s physical choices for that character.

Bellaire’s colors have been selling the time period more than any other creative element, and the relative lack of palette given the grey flashback scenes in this issue highlight some line looseness and a general rushed feeling in the art. It’s a larger narrative choice that is smart and can work well, but it’s not a good one in this book. Bellaire does a lot with a little, however – Jackie’s blue uniform is deceptively cheery and pristine, full of hope and promise that slowly drains from her life, and Bellaire picks out similar, primary hues for each subject to anchor them in these memories.

Otsmane-Elhaou’s font choice in this book is a very hard sell. In digital format, it’s difficult to read and unnecessarily scratchy, and doesn’t do much to enhance the book’s particular pastiche. Issue four boasts some color-coded narrative boxes that become more than a bit confusing when we realize that the conversation on the page is taking place on the phone with a third party while the silent action is between Raúl and his original target. Otsmane-Elhaou aims for clarity here, as this is a narrative choice that can’t be laid at the feet of the letterer, but the stroke on the boxes and the color do little to ease that confusion. As for dialogue, the chopped balloon tails and rough stroke blend well with Marron’s line but isolate the text a little too much and, again, add some of that cartoonishness that doesn’t serve the book’s serious tone.

There’s a lot of narrative work done in “Killer Groove” that obscures a definitive thread, point of view or mood. Is this book about Jonny? Jackie? The kid? Raúl? Is it about tragedy? Drug use? Crime? Music? All of these elements are here at once, and four characters are a lot to juggle over a relatively short run so far. Shifting lenses are fine, but to manage those we need a kind of essentialism: show us the details that matter, the moments that count. We need less ambient conversation and fewer car rides and more of that hard-hitting violence or spell-binding tension when words hang in a room. Noir’s crackle comes from stripping the content down to the marrow and going heavy on style, and there’s too much filler in this book so far. Similarly, realism’s allure comes from the utter artifice and control that lies at its core. In comics, it’s very hard to pull off because the nature of the medium is to push the boundaries of linear storytelling. It’s hard to nail the cadence of a conversation or tailor the length of time we spend in a scene when our eyes can move anywhere on the page at any given moment.

The tropes of noir and realism have been used to the point of instant recognition and audience fatigue, so when a team chooses to tread in this territory they’ve got to be laser-focused and precise. “Killer Groove” slams noir and realism together but won’t commit to either in execution, and the book suffers significantly as a result.