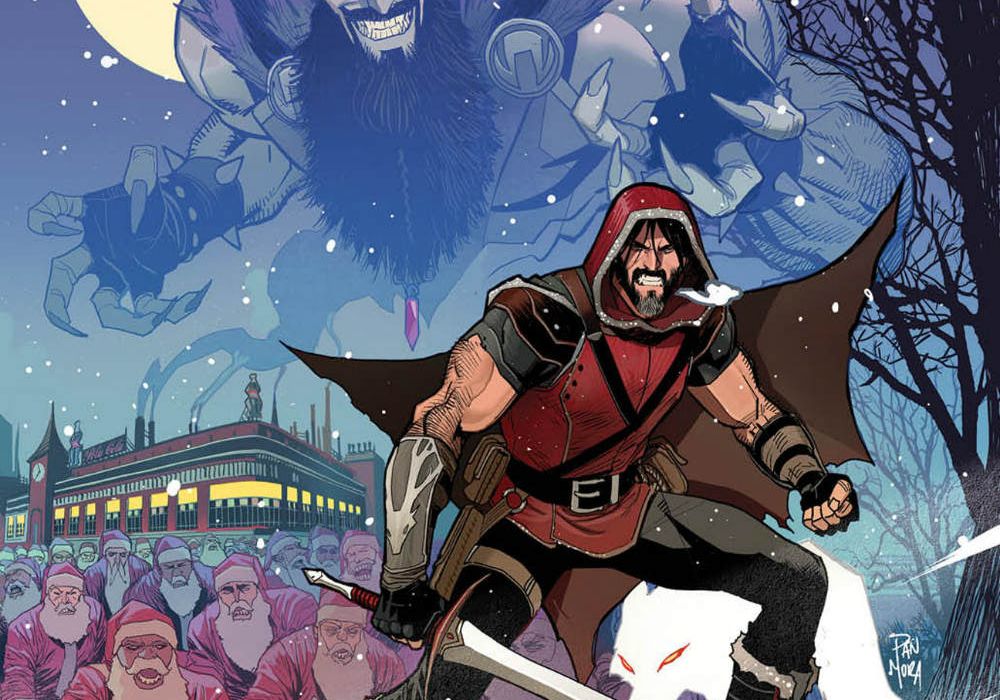 Grant Morrison is a creator known for psychedelic insanity. That can be fun when taken to extremes, but when he’s given a more narrow focus, he does some of his best work. “We3,” “All-Star Superman,” “Animal Man,” and his legendary run on “Batman” are some of his best works, whereas stories like “Final Crisis” are fascinating, but bury themselves in their own ideas. The original “Klaus” series was one of the most focused and coherent Morrison comics ever, answering the question of what Santa Claus would look like with a superhero origin story. Unfortunately, this latest adventure for Morrison and Dan Mora’s super Santa strays towards the more incoherent and impressionistic. 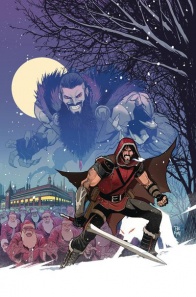 Eisner Award-winning creator Grant Morrison (All-Star Superman) and Russ Manning Award winner Dan Mora (Saban’s Go Go Power Rangers) reunite for a brand-new Klaus Special! An evil Santa from an alternate dimension has founded an evil soda corporation that uses Christmas and Santa as a marketing tactic to build their fortunes. Only Klaus can defeat the Pola Cola Corp and the zombie-like Santas that are in the evil Santa’s thrall. ‘It’s the beautiful art and the unusual blend of grim medieval setting and whimsical fairy tale elements that truly distinguish this tale.’

It’s worth noting I am Jewish and I love Christmas lore. The Jesus stuff is cool, but like many American Jews, I love Santa, Rudolf, the Grinch, Krampus, the cookies, and the carols. I love Miracle on 34th Street and Elf. So the idea of taking all that lore and treating it like the continuity in a superhero universe is neat. Add to that some of the trappings of Batman and Superman, and the concept of “Klaus” is a really good time.

This one-shot starts out strong. A family finds themselves in Xmasville, a town run by nefarious soda conglomerate Pola Kola and populated by brainwashed Santas. It’s an examination of the relationship between Christmas and consumerism, and the villain is a Jimmy Olsen-lookalike heir to the soda empire who wants to own the trademark of Santa Claus himself. Along the way, the heroic Klaus references his battle with the Martians and comes face-to-face with what can only be described as Santa by way of DC’s Lobo.

As with any Morrison comic, it’s filled with great moments. Morrison is great at working with his artists and there are some panels that took my breath away. One in particular of Klaus striding across the rooftops with his red cape blowing in the wind should be as iconic as any similar image of the Dark Knight. The weird imagery and contraptions that Mora dreams up are totally out there, and it’s a joy to flip through the pages. Evil Santa’s space-cycle is totally rad. The extra-dimensional North Pole Workshop/Batcave is delightful.

Mora also gets a chance to change-up his art style with a few flashbacks and dream sequences, which are equally beautiful, adding a certain ethereal quality to the issue. These panels are completely dissonant to the style in the rest of the issue, but that works in their favor. It highlights the weirdness of the machine gun Santa war, and also manages to juxtapose that with images of a more typical mall-Santa. It’s Santas all the way down so drawing distinctions between them can only work in the book’s favor, and as the pages stand on their own, they are quite beautiful.

So it’s unfortunate that the story loses the plot so quickly. There are so many ideas, and not all of them work well together. Maybe if given a few more issues to pace itself, “Crisis in Xmasville” would have found its stride, but the issue is rushed and confusing. I’m certain it’s full of meaning- each time I’ve gone back I’ve caught things that I’d previously missed. But there is subtle, and there’s just plain obtuse, and the issue leans a bit too heavy into the latter.

There are a few emotional beats in the issue, including a shocking death, and a twist ending, that totally track, but are rendered toothless by the breakneck pacing. The plot points barely have a moment to land before you’re being introduced to more wacky characters and superpowers and villainous motivations. The pieces are all cooler than being cool, but they never coalesce the way you want them to.

This makes “Crisis in Xmasville” more about the cool poses and splash pages than anything intellectually or emotionally stimulating. It’s a little bit too weird and trippy to feel like a 90s comic, but it’s too packed with incoherent action to feel like a proper modern comic. It stumbles somewhere along the middle, teasing us with inscrutable subtext and meaningless text. The experience left me colder than Grandfather Frost.

I’m not trying to be a Christmas grouch. There’s a lot of joy to be found in a battle between Batman Santa and Lobo Santa. There are wolfmen, portals, sleighbells, and plenty of evil asses getting kicked. As a comic book, “Crisis in Xmasville” doesn’t quite measure up. But as an addition to the Christmas canon? It may be just the kind of holiday cheer a superhero fan should put on their Christmas list.

Final Verdict: 7.8 – An excellent creative team crafts something that never quite comes together.