Out on her own, Starfire is trying to plant her roots in Key West. However, Mother Nature and others have different plans. 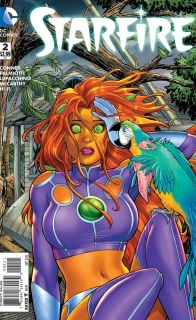 Florida is so nice this time of year…the warm weather…the beach…and Starfire beating the crud out of the bad guys! You should really try to get down there and see for yourself.

With the introductions in issue #1 out of the way, we dive into Kori’s first adventure going solo. As you may/may not know, our dear Tamaranian has moved to Florida. However, it’s the Florida that gets temperamental when people don’t come to the beach and decided to bring the party to them via massive, property destroying hurricane. This is a call to action as Kori does what she does best: be a hero.

This may sound like a mundane plot, but considering that most of my favorite books can be incredibly tense and heavy, it is a joy to palate cleanse with a book that is about a good person doing good things and Connor/Palmiotti have fine-tuned such a plot to make it enjoyable. They bring a tense tone to such a situation, but they never let it overwhelm the book and keep it true to the character work they are doing.

And really, it’s the character work that Connor/Palmiotti are excelling at. Let’s face it, prior to this ongoing, Starfire was under the creative direction of, what can generously be described as, “you’ve got to be kidding me!” But Connor/Palmiotti have manage to blend the most well-known characterization of Starfire from the Teen Titans cartoon with what made her special before the reboot. She can be a bit innocent of Earth customs and sayings (“It seems this Mother [Nature] is very angry if she is doing this to her children”) but she’s not a dummy. And above all, she is empathetic and a good person. This shows in every person she saves, from search and rescue personal trapped at sea, to the pet parrot of an old lady. Our princess has a wonderful foil in Sheriff Gomez, who is more pragmatic and cautious, but shows a great deal of worry for those trapped in the hurricane.

What makes this retooling of Kori a thousand times more enjoyable is the stellar artwork. It is said that you can do sexy without being sexist. And as someone who is attracted to women, yes I do think Kori is attractive. And the artwork of Emanuela Lupacchino, inker Ray McCarthy and colors by Hi-Fi create a stunning looking Starfire. But they know that there is a time and place for cheesecake and know that saving people during a hurricane is not the place for it! I think the real stand out moment is near the end. The hurricane has past and Starfire is exhausted from all the saving and such. So, she goes to the roof of a building to soak up to rejuvenating sunlight. She just sits on the roof with the brother of Sheriff Gomez, who she had saved, and they talk a bit. Compare this with the infamous scene from the odious Winick/Chruchill “Titans” #1 she it’s full on naked Kori for no particular reason. It’s even a massive improvement from her depictions in “Red Hood and the Outlaws”.

Another aspect of the art I need to address is Hi-Fi’s amazing colors. Hi-Fi has always been the colorist(s) that I really associate with brightness and vibrancy. When you’re doing a fair weather, optimistic and fun superhero book, it’s Hi-Fi that I hope to see doing the colors. Even moments that would be scary and grim in a situation like a natural disaster don’t shatter the tone that the book is trying to go for thanks to such colorwork.

For all these elements that I enjoyed, and as grateful I am to see this retooling of the character, there were some problems I had. Most of these are little things that added up to some wounds for me.

First off, let’s talk about humor. It is subjective. I have to say this because while this book isn’t like “Harley Quinn” (a book that, frankly, I find as funny as a stroke), it does have some humor and it does work in some places. In others though… One such aspect was Starfire thinks in pictures, using old fashion thought balloons. Now as someone whose favorite superhero in the genre is Impulse, I love such a technique. Having said that, some of them fall flat for me. Admittedly, this could be me missing the joke and the meaning behind it will finally come to me as soon as I submit this review.

A piece of humor that I really felt was annoying as it went on were these text titles at the top of some pages to set the scene, usually with a pun or something. It was fine at first, but it wore very thin for me very fast to the point that I found them distracting.

I know it sounds like I just massively ragged on the book for its humor and that I must come off as a joyless “hurm durm grimmdark” parasite, but there was some humorous wordplay in dialogue that I appreciated and, for those subjective faults, the positives to this issue were really positive!