While “Koshchei the Deathless” may present itself as a mere side story, one that could be skipped without any real impact on the overall Hellboy Universe, it is nonetheless unmissable. Mike Mignola and Ben Stenbeck have created something truly unique and an absolute joy to read. 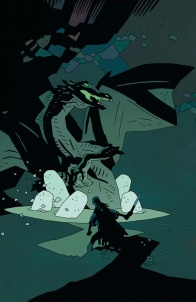 Sent to kill Hellboy by the Baba Yaga in Darkness Calls, Koshchei the Deathless hinted at a long and tragic life before being enslaved to the Russian witch.

Now, in a pub somewhere in Hell, Koshchei tells Hellboy about a dangerous mission when the witch sent him to hunt and destroy the last dragons before their eggs hatched.

Back when “Hellboy in Hell” was first announced, Mike Mignola hinted at grand plans for a series that could run indefinitely, with Hellboy wandering around different districts of Hell—there could be a section like Russia, another like Japan, one like India… It was a tantalizing idea, but it never came to fruition.

Instead, Hellboy killed Satan, creating a power vacuum in Hell. At first, Mignola thought he could ignore it, but gradually this plot development kept sucking everything in, and in the process, Mignola’s plans for Hellboy wandering the districts of Hell vanished.

Except I’m not sure they did. I remember the way Mignola talked about Hellboy’s journey in Hell as sort of wandering and meeting other folk with stories to tell. In effect, “Hellboy in Hell” could function as a mere framework for a whole other story. And that’s exactly what “Koshchei the Deathless” is. I don’t think Mignola’s original plans for “Hellboy in Hell” were abandoned, but rather they grew into something else—the miniseries we’re reading now.

I bring this up because the excitement I had had back in 2011 for a series with Hellboy listening to odd stories in Hell, was sparked back to vivid life with “Koshchei the Deathless” #2. As much as I loved the first issue, it was mostly a retread of the short story ‘How Koshchei Became Deathless,’ a story from 2009, when the publishing landscape of the Hellboy Universe was very different.

By framing “Koshchei the Deathless” in the context of 2009 Mignola’s work, I wasn’t seeing the scale of this miniseries, taking in all the growth that’s happened since. Mignola’s gone on an odd journey through Hell with Hellboy, half expecting his readers to balk at the more eccentric elements, and instead we responded enthusiastically. Looking at “Koshchei the Deathless” #2, I see something Mignola would not have written in 2009, even if he wanted to. But in 2018, I think he’s convinced himself at least some of us will go along for the ride; I don’t feel like he’s reining himself in for our benefit. Mignola’s freed himself to explore odder stories that might not seem like the most marketable of concepts on paper, and in doing so, he’s made something truly fascinating.

“Koshchei the Deathless” is Mignola doing what he does best: reshaping folklore. I never tire of reading this stuff. Mignola has a way of embracing the absurdity of folklore without judgement. He takes ideas that on paper sound ridiculous or childish, then transforms them into something somber and ominous, but never strays so far that the absurdity is diminished. The absurdity isn’t counter to the tone he’s setting up, but rather an essential part of it.

And this highlights what an asset Ben Stenbeck is to this miniseries. Mignola and Stenbeck have been collaborating for a long time now and it shows in every single panel. I mean, there’s a scene with Koshchei and company following a ball of string, and Stenbeck draws it in such a way that neither diminishes the whimsy nor the ominous tone. Stenbeck has a flare for creating art that captures the duality in Mignola’s writing. This is no small feat considering the elements in play often seem like they run counter to each other.

I’m going to have to delve into spoilers for a bit. Skip the final paragraph for the verdict if you want to remain spoiler free.

Part of the fun in “Koshchei the Deathless” is that it’s a story about a guy telling his tale to another guy in a pub, and throughout the tale, he meets other characters with tales of their own. This story within a story format is something Mignola enjoys, and it adds another layer to events unfolding. As we watch the progression of the Koshchei of the past, we’re always contrasting him against the Koshchei sitting in a pub in Hell. Hellboy has a commentary on events too, which can add punctuation to certain moments, or remind us that we’re being told this story by a narrator that may not be entirely reliable.

This isn’t just a story within a story either; there are even stories within the story within the story. It sounds complicated, and it easily could have been, but Stenbeck and colorist Dave Stewart have been very thoughtful in the way they navigate the story space. Stewart has given Hellboy and Koshchei in the pub in Hell a distinctive palette that isn’t used elsewhere, and Stenbeck has placed a distinctive crooked picture frame on the wall by the two characters. Even if we only return to the pub for a single panel, and a panel that only shows Koshchei, there are enough elements there to immediately orient the reader so we know where this panel takes place in time and space without having to consciously process it.

When we get to stories within the story within the story, Stenbeck draws these with a completely different approach to composition with isolated elements against a largely blank background. They clearly stand apart visually.

And even scene by scene, Stewart crafts such specific palettes, that he can use them in a flashback later on and they’ll always stand apart from the current scene. The art team is doing such a good job here, that the complexity of this project is virtually invisible to the reader. The composition and color choices feel inevitable. Oh, and setting aside the pure function of the art for a moment, purely aesthetically this comic looks fantastic. It’s Ben Stenbeck’s best work to date.

I have only one criticism of “Koshchei the Deathless,” and it’s related to a plot point. Koshchei was a servant to a dragon for nine years, a dragon that grew to love him like a son, so it’s difficult to imagine Koshchei taking on this mission given to him by the Baba Yaga to slay all dragons without confronting the possibility that the dragon he knew is still alive and he may have to kill him. We’ll see how that plays out in issue #3, but it was strange.

“Koshchei the Deathless” is off to a fantastic start. It reminds me of stories like ‘The Three Gold Whips,’ which wasn’t really Hellboy’s story at all, he was merely a passenger in Captain Dulot’s story. “Koshchei the Deathless” takes this idea further than “Hellboy in Hell” ever could, pushing Hellboy into only three panels in this issue (and in one of those he’s only an arm), opening up uncharted territory to explore. The Hellboy Universe feels more boundless than ever before.

Final verdict: 9 – “Koshchei the Deathless” is more than just a “Hellboy” spinoff. It’s a spiritual companion to “Hellboy in Hell,” straying into stranger places than most Hellboy Universe stories dare. And like “Hellboy in Hell,” it is a magnificent read.