Mike Mignola and Ben Stenbeck hit it out of the park with another engrossing installment of “Koshchei the Deathless.” 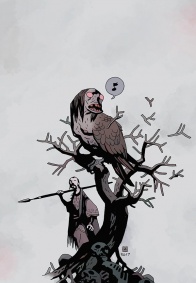 Koshchei tells Hellboy of the last dragon, a kingdom terrorized by an avian creature, and the tragic choices he had to make in the Baba Yaga’s service.

Mignola returns to Hell and to the bizarre folklore that’s filled some of his greatest books, reuniting with one of his favorite collaborators, Ben Stenbeck (Frankenstein Underground, Witchfinder: In the Service of Angels, Baltimore).

Christopher Lewis: This issue of “Koshchei the Deathless” should be renamed “Koshchei makes a lot of bad choices.” While I am not going to go into spoilers yet, my previous statement shouldn’t be much of a surprise to anyone. I mean Koshchei is in Hell telling Hellboy about how his life led him there, and how he was manipulated by the Baba Yaga. Also, at the end of the last issue we discovered that Koshchei’s adoptive dragon father was also the father of the dragons that Koshchei and his companions killed. So this discovery really set the tone for this entire issue and gave a melancholy vibe to the story. Mark, what are your thoughts?

Mark Tweedale: Koshchei does indeed make a lot of bad choices in this issue. I spoke briefly in my previous review about how I thought it was odd Koshchei didn’t acknowledge the possibility that one of the dragons the Baba Yaga had commanded him to kill was likely the very one that had made him immortal and loved him like a son. I like the way this issue dealt with that denial in Koshchei.

But as you say, the opening scene is already pretty bleak. Koshchei has committed an unspeakable act from which there’s no going back, and he’ll never find peace again. Hey, we always knew this would be a story about a man becoming a devil. That said, for such a dark journey, Mignola and Stenbeck had me smiling quite a bit while reading this. Honestly, Hellboy’s commentary in this issue was fantastic, the perfect offset to Koshchei’s bleak tale. I know Hellboy is still in “Hellboy and the B.P.R.D.,” but he isn’t written like this. So even though Hellboy hasn’t really been away as such, when I read “Koshchei the Deathless” I can’t help but feel like Hellboy’s back in comics after a long absence.

Chris: Agreed. There is something about those two casually talking together that works great. It reminds me of two old men, beaten by life, nonchalantly talking about the past. One actively listening and the other is not just telling a story, but reliving his life. It also doesn’t hurt that Stenbeck is presenting these two perfectly. The combination of art and story together makes these scenes very real and engaging.

Staying with Stenbeck, his art in this issue is great. I am continually impressed with him setting the sad tone I mentioned earlier. So much of it permeates off of Koshchei’s facial expressions and body language. Also the transformation from the confident man shown in the first issue to the beaten and tricked man here is very significant. (See the images from issues #1, #2, and #3 below)

Mark: Stenbeck’s doing his best work yet on this series. “Koshchei the Deathless” is such an odd-shaped beast too. (Spoilers incoming.) Structurally, this issue can be divided into three parts: the first wraps up the dragon plotline from the previous two issues, the second tells the nightingale story, and the third kicks off the marrying a corpse story. It’s a mark of Mignola and Stenbeck’s talent that this doesn’t feel disjointed. The stories in this issue may be episodic, but for Koshchei, there’s a clear downward emotional journey, and Stenbeck makes sure we never lose sight of that. This is the glue that holds this together.

Plus, I gotta say, as odd as this structure is, it totally works. It marries the feeling of Mignola’s larger epic miniseries with that of his short stories. Somehow the two can co-exist in one work.

Chris: Agreed. When reading this issue, all I kept thinking was that we have a man who went on a journey in hopes of saving his soul because it has been poisoned by his bad deeds. This means he is self-aware of what he is doing to himself and wants to change. However, the Baba Yaga’s deception is so traumatic to Koshchei that it leads him into actions that further poison his soul. He screwed up, he is aware of what is happening to him, but he continues into the abyss.

What I like about the three parts that you were talking about is that Koshchei had a choice in each of them, but he did the wrong thing and it leads to his transformation into Koshchei the Devil. His purposeful denial (a choice) that he would have to kill his dragon father when he started his journey, his choice to destroy the entire town and his own army using the nightingale, and his choice to marry a corpse. He is self-destructive, and he’s the real reason that his life is a tragedy.

Mark: I think there’s something fascinating in telling a story about a character that’s already damned. Koshchei’s already been lost, but there’s the desire to be redeemed still. He’s so angry at himself for screwing up so monumentally, and whenever something pisses him off, like the King in the nightingale story, the horrible rage comes spewing out in torrents and damns him further. He’s like a man thrashing about in quicksand and sinking further.

Chris: Another thing, that nightingale was creepy as hell with the odd shaped head, large mouth, and human-like torso. I am sure that Mignola had fun creating that thing.

Mark: Just as I’m sure Stenbeck had fun adapting it to his own style. The covers are usually drawn first, so I assume that was the case here. There’s one panel of the decapitated head with its mouth hanging open, but it’s eyes have this sheepish “Drat, I’ve been caught” look. It’s so perfectly executed.

Chris: I am going to have to give this one a 9. The story, bar scene dynamic, and Stenbeck’s art are amazing. I can’t give this series enough praise.

Mark: It’s a 9 from me too. Mignola and Stenbeck both seem to be enjoying themselves and it shows in the work.

Final verdict: 9 – Mignola and Stenbeck continue to outdo themselves with “Koshchei the Deathless.” Buy this book.