“Koshchei the Deathless” may seem like an odd corner of the Hellboy Universe to explore, but that’s precisely what makes it great. Mike Mignola and Ben Stenbeck embrace the oddity every chance they get and the book is all the better for it. 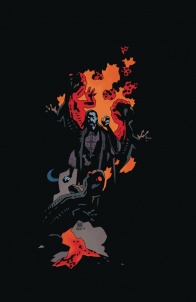 An encounter at a witches’ Sabbath leads Koshchei down a road of betrayal, and in his revenge, he comes face to face with the enemy he least expects.

Mignola returns to Hell and to the bizarre folklore that’s filled some of his greatest books, reuniting with one of his favorite collaborators, Ben Stenbeck (Frankenstein Underground, Witchfinder: In the Service of Angels, Baltimore).

Mark Tweedale: I feel like I might get a little repetitive in this review, rehashing our previous three somewhat, because I’ve got nothing but praise for “Koshchei the Deathless.” To clarify, #4 never reaches the heights of the previous issue, but then #3 had that marvelous nightingale in it, so that would’ve been a rather tall order.

In our last review I mentioned how “Koshchei the Deathless” simultaneously feels like Mike Mignola’s short stories and his larger arcs—it’s episodic, but there’s still a larger structure there—and I can’t help but wonder if this is a major reason why I’m enjoying it so much. The episodic structure works in the issue by issue format better than most stories. I normally bristle at the idea of reading singles instead of trades, but “Koshchei” isn’t hampered by the format at all.

Christopher Lewis: I completely agree. The issue by issue format works because each issue is set-up to tell a different phase of Koshchei’s life. Think of it this way, the first issue was Koshchei’s origin, the second was his quest, third issue was his self-destructive phase, and now we have his dysfunctional relationship. The episodic tales being told in each issue perpetuate the themes of each phase.

Another reason I think this approach works so well is because we know exactly how the story ends, with Koshchei being damned and becoming the Baba Yaga’s slave. That being said, when reading, I am continually looking for Koshchei to screw up, which he constantly does, so the story keeps meeting my expectations.

Essentially, all of these things compliment the overall story being told, which is keeping me engaged and loving the experience.

Mark: I think my reactions reading this miniseries are very much like Hellboy’s.

OK, I’m gonna dive into spoilers. This is the fourth issue, I think it should be alright to start talking spoilers this early in the review… I hope.

“Koshchei the Deathless” has strayed into full-on crazy Mignola stuff, like naked Koshchei fighting a hag. (I wonder how Ben Stenbeck reacted when he realized he had to draw that sequence.) That makes for great individual sequences, but the episodic nature of the story creates drastic switches in tone which could’ve easily become disjointed. Hellboy is really the glue that holds this whole thing together. He doesn’t even need to be in it that much. Just a few lines here or there does the trick. And Mignola always finds contrast between Koshchei’s story and the pub scenes that add an extra little spark, like this moment: 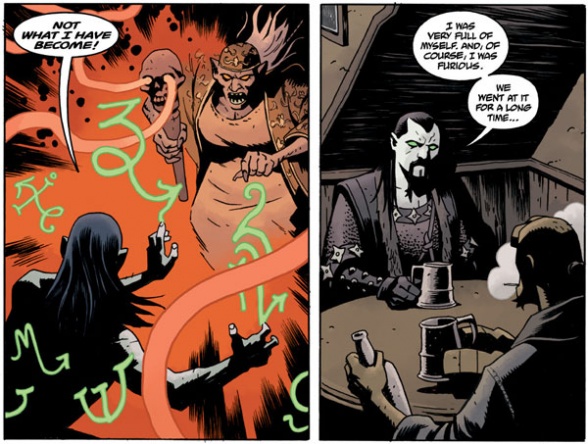 No matter how serious and dire things become, Mignola and Stenbeck never get to a point where they can’t step back and highlight the absurdity of what’s happening. Without these moments, “Koshchei the Deathless” wouldn’t be nearly as much fun. 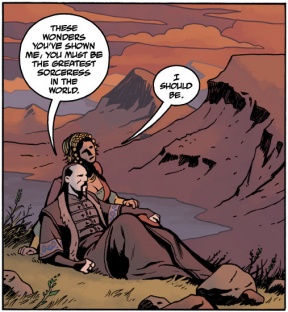 Chris: I’m with you, and this is where I get a little repetitive with praise because Ben Stenbeck’s art continues to perfectly set the tone of the story. During the beginning of the issue I was impressed with how he elicited the feeling of serenity and contentment with his art, which meshed perfectly with Koshchei’s fledgling relationship. A lot of this feeling came from Koshchei facial expressions and demeanor, but was truly evoked by how Steinbeck presented each panel. Most of the panels showing beautiful landscapes with Koshchei and his lady shown peacefully in the background.Continued below

Then in the blink of eye, Stenbeck changed the tone to anger during the plot twist. Facial expressions and demeanor become rage, panels moved in to close-ups of the Baba Yaga and Koshchei, and the scenic landscapes disappeared. This transition was so drastic, but at the same time flowed, which shows Stenbeck’s versatility. 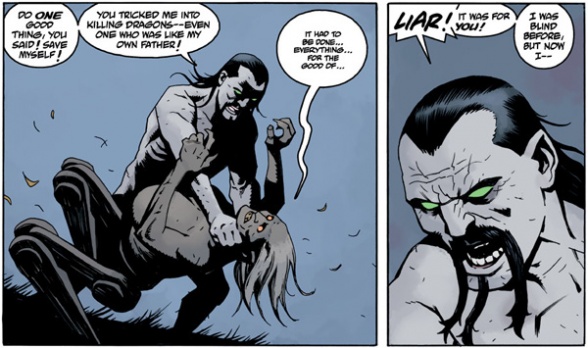 Mark: There’s a panel that comes to mind going from peaceful Koshchei sleeping under the stars to the big fight with the Baba Yaga, which shows the care taken in these moments of sharp transition.

The staging there totally sells it, with the Baba Yaga rising up behind Koshchei. I’m constantly blown away by how much this feels like a Mignola-drawn book without actually looking like Mignola’s style. I can’t imagine this book being this good without the Mignola–Stenbeck collaboration at its core. (Plus this panel of Kirby crackle made me tremendously happy. I love the way this visual has come to be associated with Vril. Random thought, I know, but I wanted to mention it.)

Chris: That’s true and does make for a lot of fun.

On a separate note, something I talked about in our previous review was that Koshchei is self aware, knows he is continuing into the abyss, hopes to change, but the deceptions perpetrated against him push him farther into damnation. That being said, the scene where he fought his future, monstrous self should have been an epiphany for Koshchei that he needed to change, however the impact of this event was tainted by further deception. I bring this up because this theme continues to show itself in each issue and never gets old. It’s a testament to the quality of the book and its creators.

This is a 9 for me. The synergy created by Mignola and Stenbeck is fantastic, and story continues to remain strong.

Mark: I must admit, I’m looking ahead and thinking, “Oh no, there’s only two issues to go!” I’ve been having way too much fun with this series. “Koshchei the Deathless,” like “Frankenstein Underground” before it, has expanded what we could define as a Hellboy Universe story. These odd stories that stray so far from the world of Hellboy and the B.P.R.D. are (for me at least) the most interesting stories. So it’s a 9 from me, yet again.

Final verdict: 9 – “Koshchei the Deathless” has been consistently excellent right from the beginning. Together Mignola and Stenbeck can seemingly do no wrong.