Ales Kot, Will Tempest and Tom Muller return with the second issue of “Material”, the comic book equivalent of hurling a brick at line of police officers during a riot.

Read on for our spoiler free review of “Material” #2 to find out why you need to be reading this book. 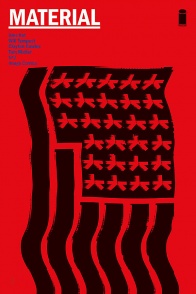 Written by Ales Kot
Illustrated by Will Tempest
America is not what it used to be.

“Material” #2 is a comic book stripped away to a raw and brutal emotional core. It’s a comic that seems to hate the world it was born into. It’s a comic that seems to hate the need for its existence. Like the A.I. featured in the story, it seems to have touched human consciousness in the 21st Century and found a cesspool of hatred, intolerance and violence. But that’s not true, that last part, at least. No, “Material” #2 was birthed in the heads of Ales Kot, Will Tempest and Tom Muller and they have brought to the page all their rage, heartbreak and despair at the world we live in.

What should be clear is that “Material” is not a comic for the faint of heart. So far, the comic has focused on four different storylines and the emptiness of the lives each story follows. We have a lecturer faced with the birth of an Artificial Intelligence forcing him to come to terms with how scared he is of dying. An actress seeking rebirth from the confines of the material world in a Hollywood film. A man haunted by horrors he did nothing to deserve. And a boy beginning to realise just how cruel the world really is. The intersection of each story is not the characters themselves or even their emotions, but the world around them and it’s cruelty.

The art of “Material” is what many might consider to be ugly. The lines are simple and many panels consist of nothing but the barest representation of the scene on a flat background of colour. The colours throughout the issue lack definition and shading and are left as flat representations of mood and tone through each contrasting hue. The colours specifically chosen during the boy’s storyline, the contrasting deep blues and yellows, lead to the dark skintone of the African American characters to appear as pure black on the page and it feels as if there is detail being missed in the lineart because of how overbearing these colours are.

The storytelling is perhaps where the most experimentation comes into the artwork as the nine panel grid on ever page allows for a methodical tempo throughout the issue the Will Tempest can break up for a larger panel for emphasis. This also allows for pages where many panels are repeating shots held on the faces of the characters to feel almost intrusive of them. Like staring at them for too long. There’s a certain sense of minimalism that comes from this as the focus is usually on the characters’ faces and their expressions, letting their humanity envelop each panel.

And yet… there’s a beauty in the rawness of “Material” #2. The art is stripped bare of details, showing the barest glimpse into the lives of these damaged people (or is it the world that’s damaged?) in order to allow their humanity to shine. The core of the story are the people that inhabit it and their lives and so Will Tempest strips away the world around them. Crowds are faceless mobs, approximations of humans in as little lines as possible. Background details, what little we get, serve only to establish place. A grocery store through the aisles and shelves. A bed. A kitchen. A plane. The world around these people falls away until all that is laid bare are the people and the lives they are trying to live.

There is a brutal, emotional truth to Ales Kot’s writing in this issue. He looks deep into the hearts and souls of each of these characters and with every line of dialogue pulls forth their damages and heartbreaks inflicted on them from the world around them. The writing pulls no punches. It doesn’t sugarcoat this world. It doesn’t promise a happy ending or even anything close to what we think of as story structure. Each scene is a vignette, a brief look into moments in each of these people’s lives and how they are coping or not coping with who they are. Just as the art is stripped bare of all pretention, showing only what the audience needs to know, Kot’s writing wears it’s influences on it’s sleeves. Literally, almost every page ends with a footnote citing something to follow up on the themes of that particular page, be it a film or an essay or a song or the names of innocent Black Americans gunned down by the police. Like I said, “Material” pulls no punches.

“Material” is not going to be for everyone, that’s for certain. The zine-inspired, stripped down attitude to art that favours substance over style and raw emotional over commercial packaging means that this is an abrasive kind of comic that is not going to sit well with everyone. It’s a comic with an agenda. It’s a method through which Ales Kot, Will Tempest and Tom Muller can yell their frustrations with the world into the void and hope it can connect with someone. And I can say it connected with me. Despite everything that should be held against this book, I am swept up in the emotions poured into each page. The heart that went into creating this work as a way of looking at the world around us and wanting change what we see is palpable. “Material” is a gut punch of a comic book. It’s a molotov cocktail smashing against a riot shield. It’s tear gas on a main street. It’s a riot. And not the fun kind.

Final Verdict: 8.6 – If you’ve read the first issue, then you probably already know whether or not “Material” is for you. If you haven’t and you’ve read pretty much anything else written by Ales Kot then you can imagine what you’re in for. If you’ve done neither? Well, you should strap yourself in.