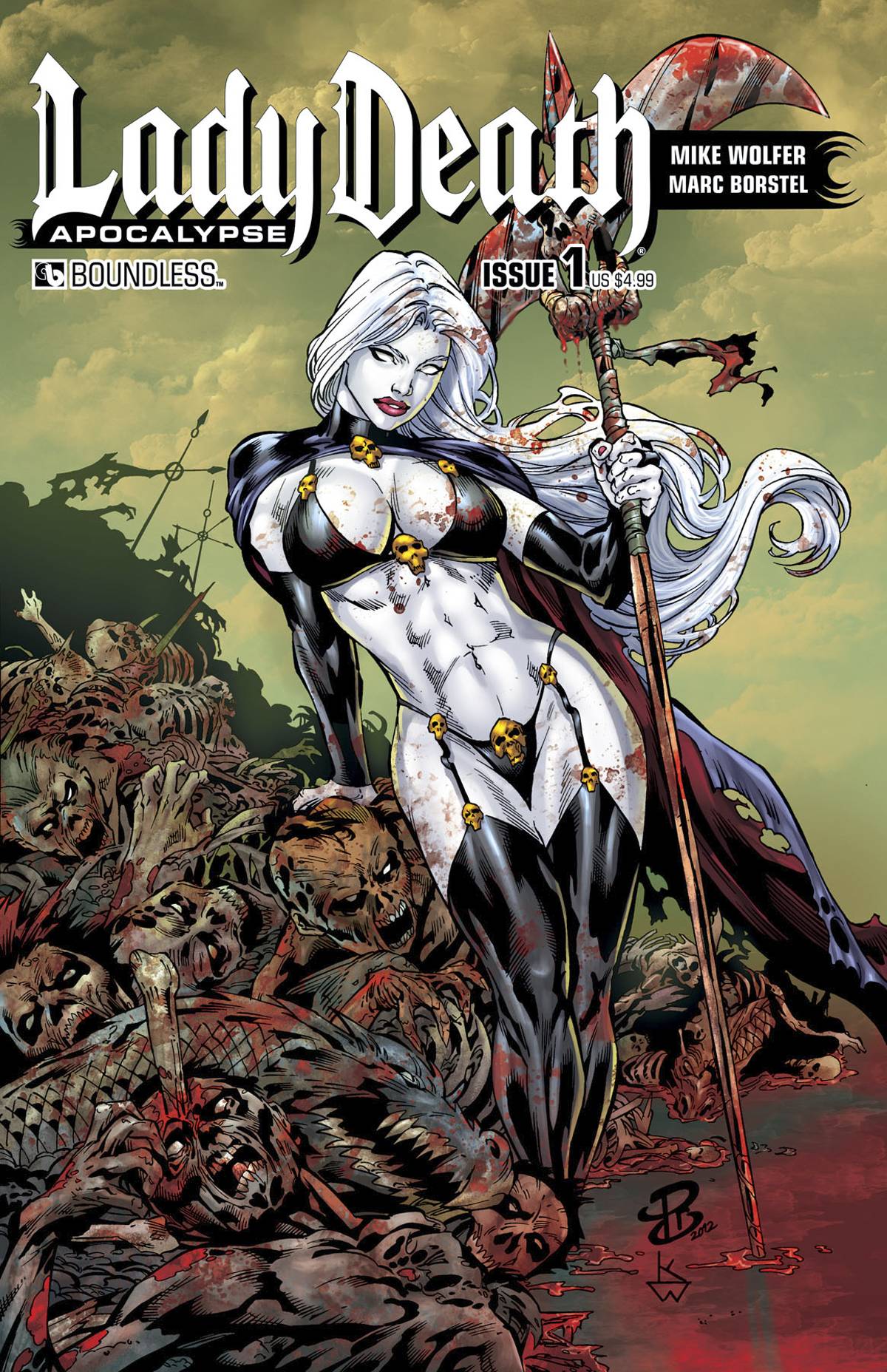 As a millennial, I missed a lot of the comics boom of the 90’s. It’s been hailed as a golden era by several comics enthusiasts, usually the men with a ponytail who breathe a little heavier whenever a woman walks into a comic book store. With the Kickstarter-powered return of “Lady Death: Apocalypse”, one of the paragons of 90’s comics, I decided to take a look into this era gone by.

And I wish I hadn’t. 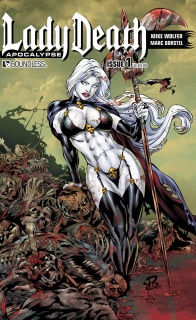 The Queen of the Dead is back to life with an all-new series at Boundless! This super-size #1 features the start of a new fully-painted series from artist Marc Borstel but also has a giant story-so-far to bring all readers up to speed on previous series and make this a perfect place for new readers to start. Much has changed during Lady Death’s absence from the Under Realm, most notably the near-extinction of the warrior class Demons. What devastating effects the demon annihilation will have on the Under Realm remains to be seen, but Hope cannot stand-by idly as a convoy of enslaved demons rolls through the night toward its captives’ oblivion. As her plans of rising to power depend on the loyal foot-soldiers she abandoned, now she must rescue them at all cost. The biggest Lady Death epic to date kicks off here!

Lady Death was one of the most popular anti-heroes of the 90’s, so popular that a million dollars in Lady Death merchandise was sold in one month, according to Wikipedia. The character has three defining traits, one of them is ultraviolence and the other two are her, I want to put this gently, heaving breasts. After raising $13,000 on Kickstarter, the series has found a new life at Boundless Comics with “Lady Death: Apocalypse”, which picks up seven years after Lady Deaths’ story last left off. And as someone whose writing style could best be described as “hyperbole plus yelling”, I want to make it clear that I am deadly serious when I say “Lady Death: Apocalypse” is without a doubt the worst comic I have ever read.

If you’re unfamiliar with the history of Lady Death, don’t worry. Just look at this first page. 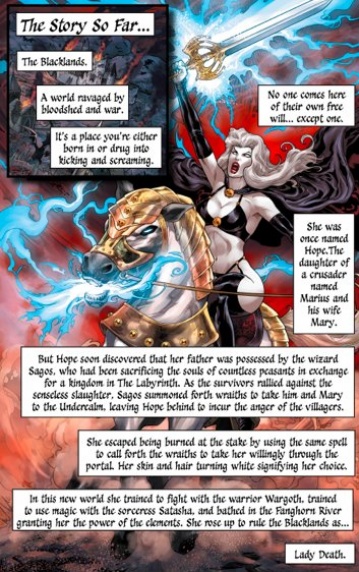 Incredible, right? That page sets off an an honest to god twenty page recap of the entire series(?) that “Apocalypse” opens with. And not a drawn-out recap either, over the course of twenty pages readers are subject to a roller coaster of an origin story which includes the titular character (no pun intended) burning at the stake, training under a demon actually named Wargoth, a bout with amnesia, and a lethal conflict with her mother who dresses exactly like her, insane bikini and all. The recap actually does give a pretty good overview of what to expect: a weird series of adventures vaguely connected together through the only consistent values in this series: breasts and Lady Deaths’ wild irresponsibility. After leaving the throne and going through a portal for seven years, honing her fighting skills and boning elves or something, Death returns to find that her half-sister has taken the throne and ordered the genocide of all the world’s demons.

Despite the fact that I spent a solid half hour trying to distill the history of Lady Death in a way that forms a coherent sentence, the story in “Lady Death: Apocalypse” doesn’t seem to matter. It’s total pandering to a crowd that wants blood and slightly hidden nipples. You can make the case that the Lady Death team genuinely wants to explore the ideas of demon genocide (?) through this comic but it’s hard to really focus on any plot when every character looks like they were designed by a guy fired from the Soul Calibur design team for being too skimpy.

This woman is wearing a belt and Elizabethan sleeves. Why are you even wearing fancy sleeves if the rest of you wardrobe is a strap of leather barely covering your privates? Did you think the sleeves were going to make your ensemble more classy because they didn’t. I can’t tell what’s worse, how this woman is dressed or how, after this panel, she is immediately bisected down the middle.

And really, that’s where most of my discomfort with “Lady Death” comes from. It’s sexual, yes, but in a way that is intrinsically connected to violence. And not badass action shots or anything either, but genuinely disturbing acts of violence that would make your average horror fan squirm like, for example, the scene where Lady Death chokes a woman until blood pours form her mouth. It’s made all the more unnerving by the 3D modeling utilized by Marc Bostel which turns each character into a dead-eyed plastic model, devoid of any emotion besides anger and posing. This comic doesn’t just live in the Uncanny Valley, it reached the bottom and dug far under it to find a whole new hell of deranged sexuality.

And you know what? That’s sort of fine. The objectification of women in comics is always a regrettable part of the industry but it could arguably be okay in a very small corner of the industry. Lady Death hasn’t been a good representation of the industry since the 90’s and I genuinely did not know of it’s existence until I picked it for Comics Should Be Cheap based on the title alone. But, even in 2014, Lady Death doesn’t’ exist in a vacuum. More disturbing than the artificial nudity and gruesome bloodletting is how “Lady Death: Apocalypse” was funded through Kickstarter. It raised almost $13,000 which may not sound like a whole lot in Kickstarter terms but is still insane outside the context of the internet. According to the statistics on the Kickstarter page, 133 people donated at around $100 including two people who donated at least $600 for the privilege of seeing a bunch of boob monsters strangle each other to death. I hope their reward package game with a card that, when opened, played “The Sound of Silence” in its entirety.

We can make fun of these donors as much as we want, but they still got what they wanted. And now, somewhere in the world right now, someone is frantically touching themselves to images like this. 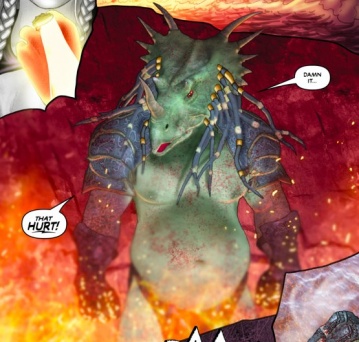 Final Verdict: 1.3 – “Lady Death: Apocalypse” #1 fails at every level. The story is disconnected and messy, the art is disturbing, and any attempt at sexuality is met with gross violence. Lady Death is insulting to both women and a comics industry that is slowly but gradually moving past characters like Witchblade or Tarot with more progressive comics like “Ms. Marvel”, “Batgirl”, or “Sex Criminals”. It’s an anachronism, an anomaly lost in an era that no longer needs it, save for the neanderthals who can’t get off without Double E sized breasts and women being murdered. Naturally, I’m going to write a monthly column about it for as long as I can.

PS: If you’re reading this and are one of the two people who donated $600 to the Lady Death Kickstarter, contact me for an interview at my e-mail listed below. I genuinely have no idea what about this book could possibly be appealing and I’d love to hear from the other side of the debate.