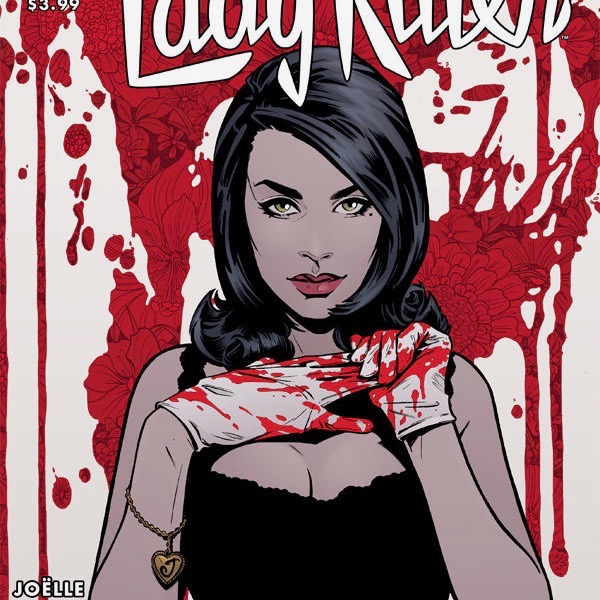 Joelle Jones’s work on “Lady Killer” has been phenomenal. With “Lady Killer 2” #5 she closes out the second series with a finale that’s damn near perfect, simultaneously creating an unlikely alliance and setting the stage for the book’s inevitable third run. 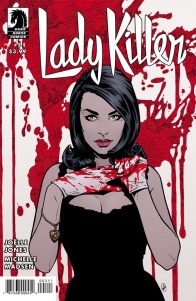 Josie prepares to defend her family and home with the help of a new ally.

In a sense, “Lady Killer 2” might seem like well-worn ground, traveled by dozens or even hundreds of pop culture creators over the years. By day, a highly functional, charming character lives out such enviable scenes of domestic bliss that it’s downright boring. By night, that same character becomes an entirely different person, moving through a dark and seamy underworld with a natural grace and ease that makes it clear their secret double-life is no mere passing fancy. It’s the very core of their being. To be honest, this duality can be highly engaging or it can totally fall flat. The tale is all in the telling. Thankfully, the incredibly well written, expertly drawn, well paced pages of “Lady Killer 2” are as good as it gets and the final issue is close to perfection.

Early in “Lady Killer 2” #5, as the opening flashback winds down and we find ourselves back in the present, there’s a brilliant two page sequence that poignantly encapsulates three generations of dysfunction and violence.

On the left hand page, in the past, young Josie is seen with her bedraggled mother in the family’s kitchen, her dead father (poisoned by Josie’s mother) slumped over the table. On the right hand page, in the present, the adult Josie hugs her own stomach, staring forlornly through her home’s shattered front window as Mother Schuller hovers in the background, tactfully positioned over Josie’s shoulder like some sort of outward manifestation of Josie’s nagging conscience. Echoing across the decades – as the women apprehensively await Irving Reinhardt’s vicious but inevitable retaliation – are Josie’s Mother’s simple, prescient words, uttered in the kitchen on that fateful night so long ago, “Now finish your supper. We have a long night ahead of us.”

Moments later, the long night of the present begins.

As predicted, Rheinhardt appears, silhouetted in the lone streetlight at the end of the block, gun drawn, menacingly marching toward the house through the pouring rain. Seconds after that, he fires his gun and all hell breaks loose. For the characters, anyway. Creatively, it quickly becomes perfectly orchestrated chaos. It’s bloody. It’s brutal. It’s epic. It’s ridiculously entertaining and probably more fun than it should be, given the intense level of blood and gore.

From a high angle, architectural cut-away view that spans two pages (and nicely sets the scene), we’re thrown into a rapid-fire series of smaller, more dynamic panels that are liberally punctuated by gun shots, flames and headlights, as well as Josie’s internal monologue that details her “seven rules for going into business for yourself.” It’s a frenetic yet fluid series of striking images that visually tell the story in almost disjointed bits and pieces while Josie verbally frames the action and ties it all together with wry observations, sarcastic asides and pithy, unsolicited advice.

As brilliant as the illustrations are, I would be remiss not to give equal credit to Michelle Madsen’s incredible colors. The story takes place at night, which is an entirely natural choice given the story so far. That said, the dark, moody nightscape also provides the perfect canvas on which to showcase Madsen’s talent. Her deep blue, purple and black night time hues contrast flawlessly with the bright yellows and tarnished golds that drive the action. The overall palette is dark, but it’s the sudden, brilliant blasts of gunfire, leaping flames and starbursts of headlights that grab your attention.

In another interesting choice, Madsen uses black for almost all of the book’s blood spatters, drips and gushes. Occasionally she resorts to red, which makes those scenes clearly stand out, but not nearly much as her seldom, strategically placed panels that feature solid blood-red backgrounds. It’s an unintuitive but brilliant choice that somehow makes the black bloodstains and smears seem all the more gruesome (like when Josie drags her wounded mother-in-law down the hall), while making the scenes where characters are gravely wounded and feel intense pain, all the more violent and shocking. In someone else’s hands, with different choices, it could have been a mere blood-soaked mess. Madsen’s clever colors make it more unpredictable and engrossing. It’s a deeper, more suspenseful, cinematic aesthetic – closer to Alfred Hitchcock than Wes Craven – just one of the many well considered creative choices that make this series so refreshing.