The conclusion of Jones and Rich’s 60’s period-drama/murderthon careens to a crescendo. 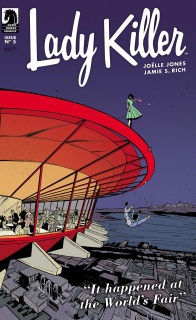 Josie closes in on the truth behind who really wants to end her life as a cheerful housewife, mother, and ruthlessly skilled assassin! Who is really behind the hit? And are they closer to home than she’d like?

A truly great mini-series is a rarity. Six issues may be the standard length of a comic book arc, but it still takes a skillful creative team to build an aesthetic, establish a convincing setting, develop believable characters, and roll an engaging plot in just over a hundred pages. But Jones and Rich have managed to do all that and more in not even six, but just five issues.

The final issue of “Lady Killer” picks up immediately where issue four left off, firing on all cylinders with Josie, professional housewife/assassin, gunning for her employers in a kill or be killed endgame. Jones and Rich have a preternatural sense of pacing that has meant this series took off in leaps and bounds from its starting point. While the first issue could almost exist as a stylish, subversive one-shot, Jones and Rich built from Josie’s initial, home life-work life balancing act to a life or death battle that threatens both Josie the assassin and Josie the mother, along with her oblivious, picturesque family. The real narrative skill of “Lady Killer”, however, isn’t how well it escalates, but how neatly the web of Josie’s life tightens around her. No story strand is introduced without purpose and every character, from her darling twin daughters to her suspicious mother in law, helps catapult this short, sharp, story to its successful conclusion.

Issue five plays out at the Seattle World Fair, simultaneously a nostalgia-tinged view of the future and a narratively limited battleground for our final confrontation. The one-two punch of Peck and Stenholm provides a thoroughly threatening big-bad for this issue, and they deliver with aplomb. Chasing Josie into the bowels of the centre, they set the stage for some of the most crisp, clinical violence I’ve seen in a comic for a while. Under Jones and Rich’s guidance, Josie has blossomed into a truly deadly, dispassionate killer, and during an almost entirely mute few pages we see her cold fury unleashed. Jones’  smooth, stylised artwork is the star of this issue, with overemphasised physicality and a pretty heavy level of gore contrasting with Josie’s cool mask and slick skirt and jacket combo. Allred’s subtle differentiation in colour palette (more subdued hues for Josie’s attackers/victims and brighter colours for Josie herself) help highlight the single-mindedness of our protagonist and really elevate the violence to a level beyond anything we’ve seen in this issue before.

Jones’ character designs for “Lady Killer” have been stand-out throughout this series, but they seem to reach their climax with this final issue. The jowly face of shadowy chairman Stenholm looks at once weary and furious, while the faces of his younger employees – Peck, Ruby, and Josie – have a kind of uniform detachment that Don Draper would be proud of. The close combat, bloody battles between these three allow for their masks to slip only briefly, but Jones uses these moments to create a fragility and vulnerability that adds a serious emotional weight to these characters. They’re not your average impervious super-spies, they’re aware of the dangers of their job and have to forcibly protect distance themselves from it through quips and disassociation. The high stakes and heavy pressure of this issue means that both Josie and her adversaries feel more serious than they have in previous issues, but it’s a smart, logical scripting choice that helps build the pressure for this issue. Instead the dialogue gives way to welcome action-heavy panels. This final issue races towards the end at a glorious gallop and feels as though it’s dragging you along with it.

Throughout the series Josie’s gender has been seen to both hamper and help her in different ways. But this final episode brings something interesting to the forefront of the narrative. As all the men in Josie’s life are drawn together, we are able to see how, in their own very different ways, they all underestimate her. From her oblivious husband who thinks it’s cute to see his ‘little lady’ working at the World Fair, to her fellow male assassins, all aware of her prowess and yet unable to imagine that she might be able to best them in single combat, they fail to see her true potential. Jones and Rich have managed to create a pretty solid social commentary on the need for a woman to be so many versions of herself and, most importantly, to never be seen to struggle. In Josie we see the perfect housewife, the social butterfly, and the workaholic, all tied together in a well made-up and manicured package. What’s more, we’re able to see how each of those versions of herself inform the others, at times contradicting and at times complementing one another. Josie as a protagonist maintains a great air of three-dimensionality while still staying mysterious enough that we as an audience are left wanting more.

And this issue ends the story (though hopefully not forever) in a similar manner. There’s enough of a climax to leave a satisfactory conclusion (no mean feat for a five issue arc) but there are still enough loose ends that Jones and Rich have left themselves a world to return to if they choose to do so. For a story that could be summed up as succinctly as ‘Mad Men with Assassins’ “Lady Killer” has managed to carve its own niche, develop its own style, offer up a story with some real substance, and leave the audience wanting more.

Final Verdict: 8.8 – A Fantastic finale for a superb story. bloody (in both senses of the word) brilliant.