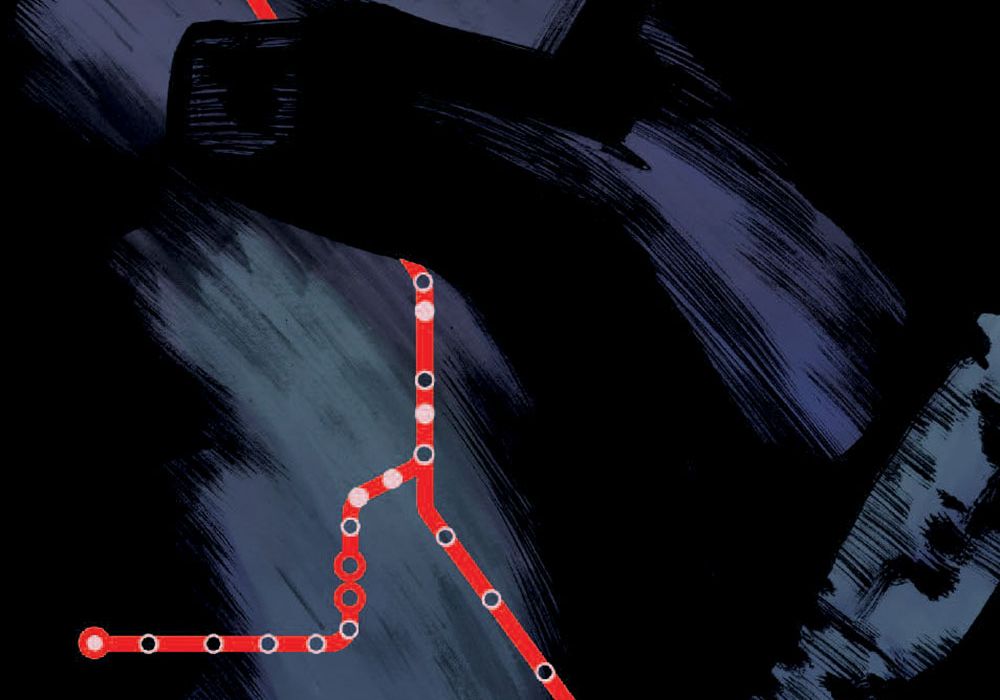 There once were two men in Austin
Whose Dark Horse comic set in Boston
Featured murderous foulplay
On that city’s subway
With some urban-dwelling monsters tossed in. 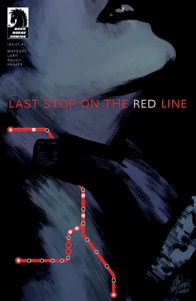 Detective Migdalia Torres investigates a vicious strangling on a Boston subway car with no feasible leads. As potential evidence produces dead ends, Migdalia inadvertently takes in a vagrant named Yusef who may have a supernatural connection to the crime at hand.

A Boston native, Paul Maybury writes in the afterword of the first issue of the four-part mini series “Last Stop on the Red Line” that he has always wanted to tell a story about his birthplace that didn’t revolve around South Boston tough guys. Instead, he has opted for a crime saga of a different stripe, a paranormal mystery. After tone-setting introductory spread that places the book firmly in the thematic wake of the Boston Marathon bombing of 2013, the book opens with a scene that could easily serve as cold opening for an urban The X-Files, or one of The X-Files progenitors, Kolchak: The Night Stalker. A woman has been killed on the Boston city subway and CCTV footage is conveniently blurry around the perpetrator’s face. Plus, the crime is so violent that the victim’s cause of death is somewhere between strangulation and decapitation. Lieutenant Migdalia Torres is the lone investigator assigned to the case. It’s a pot-boiling setup that is as frightening as it is intriguing and mysterious. Unfortunately, what follows is a bit of a head scratcher for the wrong reasons.

While Sam Lofti’s artwork colored by John Rauch is splendid throughout and shows equal ease in visceral horror and domestic drama, the narrative left this reviewer flipping back pages on a handful of occasions to see what had been missed and returning empty-handed. While some of this is to be expected in a mystery setup, Maybury’s scripting seems a bit too withholding of details, and where there are seemingly important narrative and character beats, the artwork does not illuminate the script. In one particular scene, Torres invites a man named Yusef home with her after he has done her daughter a kindness and proceeds to undresses in front of him before dinner. While there are subtle indications that Torres is in a less than perfect marriage, the scene reads oddly, in particular when readers are also privy to the voice inside Yusef’s head (tip: it’s not an internal monologue). The violent action that takes place in the first subway scene was also a bit bewildering due to switching in and out of first person POV, and the second subway scene that closes the book lacks sufficient building tension despite ample lead-in. To be clear, Lofti’s artwork here is stellar on many counts and Rauch’s palette is full of bold choices. The book’s final page is a stunner of rendering, design, and color, and there are more than a handful of pages here that would send collectors of original art reaching for their wallets. It’s just hard to not wish it was in service of a more refined story.

Perhaps ironically, where the book really shines is not in the paranormal mystery send-up but in the scenes involving a kind of Monsters Anonymous group meeting that seems to embody Maybury’s goal of highlighting the outlying and diverse personalities of his native city. Yusef and his cohorts are the supernatural offspring of Mr. Butch, the homeless Boston man who became somewhat of local celebrity in the latter half of the 20th century. There’s a fraternity amongst these individuals that is palpable, and it comes through in the pages. These are lovable losers, monsters that have been forced to the fringes of gentrified society. While Yusef’s connection to the book’s central mystery and his haunted existence is made fairly clear, his happenstance involvement with the murder investigator’s family strains at the bounds of credibility, even for a supernatural crime story.

In many ways, this is the book’s central failing. The creators want to throw Yusef and Torres and their respective worlds together too soon. While a four-issue story doesn’t provide a very long leash, the storylines could have used an issue or two to run in tandem before commingling. Having said that, the book is far from a failure, it’s just a bit more demanding than it needed to be and hard to discern whether the narrative issues are cryptic by design or not. While David Lapham may get more latitude in a series like “The Lodger,” he’s earned his perplexing narrative stripes over twenty-five years of independent comic book creation. Is it a bit unfair to not give Marbury and Lofti more of the benefit of the doubt about their creative decisions in this issue? Sure. And I for one will check out their second issue to see if some of my concerns with this first installment are alleviated. While I hoped this book would be a home run on the basis of the intriguing solicitation, it just legged-out an infield single. Here’s hoping the next trip to the plate will be more productive.

Final Verdict: 6.0 – While this first issue throws a bucket of otherworldly and comic book-worthy concepts at the reader, none of them quite stick yet. It’s a bummer, frankly, because there’s a cool story in here begging for better execution from some very promising creators.