Is it worth getting off at this Last Stop? Let’s take a look in on the second issue of the Boston murder mystery. 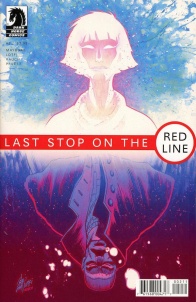 Another passenger falls victim to the phantom killer on the Boston Orange Line. This sparks Detective Torres and her new partner to investigate evidence which incriminates Yusef. Meanwhile, Yusef must control his unearthly visions while on the run to avoid being captured by the determined detectives.

Key to reading “Last Stop on the Red Line” #2 on its own is a sense of how bizarre its world is as written by Paul Maybury. With a veritable monster mash cooped up within what seems, from a new reader, to be a small town take on a modern Boston, Massachusetts, there is a lot to offer for the emerging murder mystery connected to the train lines.

Magical realism factors heavily into the storytelling Paul Maybury presents in “Last Stop on the Red Line” #2. While supernatural, non-human sapient species seem to exist, ranging from vampires to werebeasts to other forms of undead and possibly more, nobody ever comments on them outside of basic conversation between different fantastical creatures themselves.

In fact, this very human take on beings that would usually be seen as inhuman monsters seems to be a significant draw for “Last Stop on the Red Line,” showing how a mundane (albeit disturbing) crime can influence all walks of life (or unlife). Outside of Detective Migdalia Torres’s science fiction-esque handgun (which Damon notes is not regulation at all, but doesn’t discuss beyond that), normal humans do not seem to react to the supernatural elements of the series at all, instead focusing in on the humanity within those beings that could be deemed otherworldly. Notably, instead of any of the human police commenting on odder beings, we have more routine troubles, from Detective Torres chafing under the partnership with Benjamin Damon to her having as normal conversations as over what she is wearing or the safety issues involved with riding a motorcycle. Even the encounters with the more supernatural beings like Wolf are treated as routine police interrogations, rather than a human being faced with a wolf-man.

Amusingly, it is only the supernatural side of things that comments at all on their other-than-human nature, in particular Wolf. From complaining that Zev’s “Count Dracula”-like outfit is stereotypical of vampires to commenting on how he himself is a wolf, one could be forgiven for thinking he is just hallucinating all of it… if not for the fact that he is walking around covered in fur and, as readers see, has regular contact with other beings like himself up to and including a random zombie patron at the establishment he is visiting during “Last Stop on the Red Line” #2.

Unfortunately, all of this interesting character work can’t hide the fact that there is very little effort put in to bring readers up to speed on what is going on. Rather than be inviting to newcomers for a second issue to a new series, Maybury skips all pretense of accessibility and jumps straight into the murder mystery. Devoid of context, Yusef’s bizarre actions and seeming hallucinations are, while interesting to look at, bereft of any real understanding. Perhaps he is seen as a possible murderer, but what is he? Why is this happening? What is with this area of Boston? None of these questions are answered, and if they were in the previous issue, any context is lost for anybody wanting to jump in.

Sam Lotfi’s style for the majority of “Last Stop on the Red Line” #2 can be described as rough, yet cartoonish. This overall tendency is shown through the use of blurred effects, from a fast-moving fist to a car peeling by. Rather than just use motion lines and an image in focus, the entire thing is blurred instead, showing the sheer speed much better.

Certain imagery such as a mutilated corpse is, while kept relatively disgusting, made a bit more palatable for readers by blending the different pieces together, seeing it as a mass of deceased flesh rather than any single body part. As such, Lotfi helps the audience to get into the more detached mindset of Torres and Damon as they investigate the murder scene. By using the looser style, Lotfi is able to allow Maybury’s magical realism script to shine through, rather than dwell too heavily on the grisly execution itself, focusing readers in on the why rather than the what of the death.

Furthermore, the more cartoonish parts of the main meat of the story helps Lotfi to distinguish against the more detailed and slower artwork that bookends the plot itself as shown through Yusef’s eyes. The heavier details help to get into Yusef’s warped point of view rather than the relatively impersonal angles of the majority of the pages. The more direct detail in those parts, with intricate views of horrific beasts and close-ups on the posture of the traumatized helps to get deep into an individual character’s head and shape the perspective of the rest of the story going forward.

John Rauch uses two different color schemes depending on it being the main meat of the story or the bookended Yusef perspective sections. For the former, he uses natural colors for snow, buildings, and the like to contrast against spectacular splashes of one color or another, such as the flood of red into the crime scene to showcase its clash against the assumed normalcy of that area of Boston otherwise. Lighter shades, or even different hues, are used on certain areas of subjects in order to demonstrate the direction of light shining, rather than just having a gradient. On the other hand, Rauch’s colors on Yusef’s sections are much cooler, giving a darker wash to hint at seeing through the eyes of trauma or madness, or even both at once.

Final Verdict: 6.5– While the story and artwork of “Last Stop on the Red Line” #2 are interesting in theory, a lack of any real context for what is going on hinders any attempts by new readers to jump in.