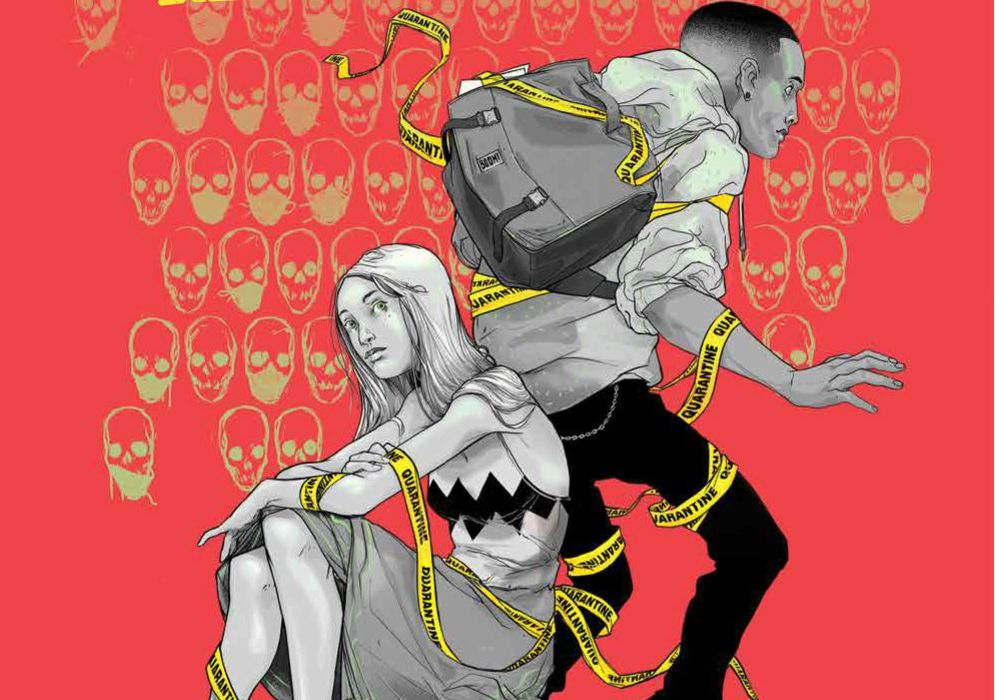 I’m always down for more slice-of-life comics in the western industry. I had no idea what I was getting into when I sat down to look at “Lazaretto”, except that BOOM!’s track record at the moment has been superb, and the premise of this looked interesting. Now I know this comic features a hellish plague. Let’s see how Chapman, Levang and Bidikar handle two distinct genres. 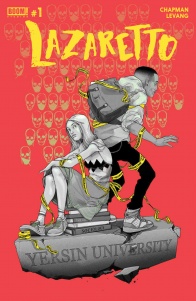 After a pandemic strikes, a dorm complex at a small American college is quarantined with all of the students trapped within. What first starts out as youthful freedom from authority soon devolves into a violent new society-it’s Lord of the Flies on a college campus.

It’s evident that from this debut, Chapman has already got a great handle on his characters. The story follows two new college students – Tamara, a practicing catholic and Charles, a timid, but well-meaning guy. Chapman ensures we know these guys are naïve, with Charles having to cope with a weed dealer in his room, and Tamara constantly repeating bible verses to themselves. It’s these traits that make them such endearing characters, making us care about them in a school full of ungrateful and physically ill bastards. When Chapman has them meet up for the first time on the roof of the college, it feels meaningful in a way that doesn’t set up romantic interest, but that these two are kindred souls that were supposed to meet.

Chapman totally has a handle on the suspense here, too. If you can, I highly recommend you go into this issue blind as I did. Chapman seeds effects of the plague subtly throughout the beginning of this that makes looking back after finishing so rewarding. From the subtle background “cough” on the second page, to Tamara being surrounded by hordes of students asking to join their clubs, it’s all there from the beginning, some more obvious than others. But the tension really develops as you get further in, leading to some genuinely unsettling scenes. As soon as you see Tamara’s roommate get sick, the plot really picks up the pace, and we follow her shuffling around the school zombie-like, with the horror building in a snowballing effect. The fear is palpable within these pages, and McLeod loves to draw it out.

I’m going to have to beat Chapman with the setting stick a little here, however. There’s no lack of placement, Chapman does give us a thorough rundown of most of the college through the eyes of the students. It’s just that everything feels a little cliché, and almost dated in terms of execution. College is by no means completely squeaky clean, but the way that McLeod shows everyone to us feels a little… Peter Parker in high school. Everyone’s looking down on our protagonist and people all seem quick to judge each other. It’s more of a trivial commentary, but for the targeted audience I feel that it might be a little disorienting as they themselves might be going through a completely different college experience. Regardless of this, however, I have no problems whatsoever with Charles’ bong smoking roommate. Those kids will be eternally part of college experiences.

Jey Levang plays a big part in why this book looks so perfect visually. On a technical scale, his linework is shaky in just the right ways – it looks like something a bored visual art student might doodle in their textbooks, especially with how simply drawn people can feel. I’m not dismissive of it because of this, I find it really interesting how Levang can create so much emotion from such loosely sketched faces. One scene, which is relatively small, but works well in this department occurs about a third of the way through the book, where the RA says ‘Welome to the petri dish, kiddies!’. We get a great depiction of youth subcultures encapsulated in every person drawn here – from the bitter, messy Goth, to the tall, confused and bomber jacket boasting Jock, and the new age, bored looking hipster/slacker. Levang gives you a complete visual image with just the right amount of detail through this panel, and this is reflective of the book as a whole.

Levang handles setting beautifully across the board in this college situated story.I do appreciate how busy and lived in every scene looks and feels, from the tight corridors the RA patrols, to the gross looking showers. It may not be a thoroughly modern experience, as stated earlier, but it’s visceral. Considering that the tone of the book does escalate to plague/infection, I think these scenes become a lot more powerful than they would in your typical slice-of-life story. I love how much the feeling changes throughout as the infection becomes more evident too. The cafeteria scene in the latter half of the book kicks off these changes, with the area feeling more claustrophobic and full of life. Levang turns it quickly into a hyper-detailed, sweaty cesspool of people by the end of the page, leaving the reader suitably repulsed and fearing for Tamara’s safety. The final scene of the quarantine is the perfect nail in the coffin too – a mirror image of the first page except everything has gone to shit.

Coloring is handled by Levang here too, and it’s always interesting to see the art as a singular vision. Colors play a huge part in this story too, with the palette slowly changing over time, or drastically from scene to scene, to indicate the presence of the infection creeping in. The first page is full of vibrant, contrasted colors, and probably the only page that remains that way, as from there we get a slightly dirtier look at the college. Everything becomes more muted, and this works metaphorically too – as a newcomer, students often has a glowing visual image of college in their heads that becomes more corrupted the more they see of it – Levang is doing this, but with the infection as a backdrop too. I love how suddenly a scene can tonally shift when the colors are adjusted too. In the cafeteria scene, most of the page is muted, drab school colors, when the last panel shifts to a harsh green based palette to represent the presence of sickness. It’s great storytelling through colors as only Levang does it.

“Lazaretto” #1 floored me and my silly expectations. As someone who isn’t hugely invested in this genre, I found every page to be oozing with compelling details and mile-high tension (and the occasional infection from plague-ridden students). Chapman has a great metaphor for the college experience captured in this first issue, and I can’t wait to see where it goes from here.

Final Verdict: 8.8 – Infection/quarantine stories have never looked as good as they have in Chapman, Levang and Bidikar’s “Lazaretto” #1.