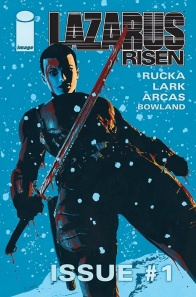 Two years have passed since the Carlyle Family was betrayed in battle, and the Conclave War encroaches on every side. As a new era dawns, Johanna Carlyle goes on the attack to ensure the survival of her Family, relying on the loyalty and support of the Carlyle Lazarus—her sister, Forever—remaining at her side. And while their united front may be enough to turn the tide, the cracks are beginning to show…

HOLLYWOOD NEWS! Amazon has set up LAZARUS for development with Rucka onboard as a writer. Rucka and Michael Lark will both executive produce alongside Angela Cheng Caplan.

It’s been nearly a year in real time since the last issue of “Lazarus,” and two years since readers last saw Forever Carlyle and her family. Many a writer may have been hard pressed to get readers up to speed, especially with a roughly two year time skip between the end of the ‘Cull’ arc (which ended back in March 2017) and the beginning of ‘Fracture.’ Luckily, Greg Rucka uses “Lazarus: Risen” #1 to not only swiftly get returning readers up to speed, but also to provide enough of a background for newcomers as well.

Before the main plot of “Lazarus: Risen” #1, Rucka delves into an brief yet wordy recap and dramatis personae section, enabling a quick turn around for a return to the series after quite some time. While the “Lazarus X+66” miniseries does help to understand the world as it is during the Conclave War on some level, the only element that is necessary to know, the state of Casey Solomon’s employment, is made abundantly clear within the issue itself.

When it comes to the main story itself, Rucka again delivers, bringing in multiple plot lines from two years ago for a variety of tones, albeit all tending toward somewhat sour. Each of these plots are examined in a relative one-and-done style, with all that readers really need to know about them brought to the fore to gear them up for another romp through the post Year X political and martial landscape.

On the one hand, we have a dose of violent politicking by Johanna and Forever, showcasing their partnership alongside supporting characters such as Casey Solomon and various high ranking or otherwise important members of the Carlyle family, be they by blood or serfdom. In spite of her relative heroism, the actions in “Lazarus: Risen” #1 help to show why Forever is still a very dangerous individual. The merger of bloody, direct actions and calm, ruthless talk about said violence works together with otherwise nice actions around those who are trustworthy, playing off both Forever and Johanna as not necessarily good or evil, but merely one relatively beneficial side of a horrible war.

On the other hand, we have the trials and tribulations of Bethany Carlyle, James Mann, and Forever’s emergent successor, Eight. While not a war zone or otherwise hostile territory, nor a situation room of any sort, Rucka still manages to keep a high level of tension and sadness nonetheless. Beth’s actions are cruel and heartless, with the ostensibly scientifically minded torment of the teenaged Eight being shown to be just as horrible as it should be. However, her growing despair does paint her in a somewhat sympathetic light in spite of it all, though not nearly enough to be a good person on the whole, acting in deliberate contrast to Dr. Mann and Gunnery Sergeant Marisol Ocampo’s more parental relationship with the rising Lazarus.

Michael Lark is, as ever, a wizard with a pencil and pen. His dark, thin artistry creates a realistic atmosphere centered around darkness and light, with special emphasis on how shadows play across each individual person. The shadows are only a small part, with a sizable amount of attention given to emotional weight on each character, especially in Beth and Eight’s side of the plot. Their volatile emotional states, from determination to rage to despair or intoxication, all play across their faces and body language with exceptional attention to detail, and the scenery itself, such as a crack in a wall from a particularly violent impact, only goes to further enhance the hatred readers would likely feel at the display.

Perspective is key to the art style. Violent encounters are shown in swift movements, but never overly gory for the sake of it. Paradoxically, the fact that moments like an execution gunshot are given a discretion shot makes the violence therefore seem even more severe. Meanwhile, taking a high angle shot to demonstrate Eight’s physical agony works well when played against a more even shot of Eight and Beth standing eye-to-eye, or a low angle shot from her own point of view when Marisol comes in to see the damage.

Santi Arcas also remains essential to the artwork of “Lazarus” through the use of color. A muted color palette works perfectly with the art style to create a sense of overall depression at the state of the world post-Year X’s dissolution of governments. All color, from a pink shirt to a blue scarf and more, has a relatively low-key nature to it, making sense like a walk out in the sunlight to a garden bench become rather shockingly beautiful by comparison. On the other hand, splashes of blood in combat show that a bright red can also be distressing rather than the other bright colors being more comforting.

It would be a crime to leave out the phenomenal prose story written by Lilah Sturges, ‘Your Last Meal on Earth.’ In ways far outstripping even Greg Rucka’s own writing on the main story, Sturges brings together extreme tension when taking in the perspective of a Waste born young woman who is faced with helping to serve Johanne Carlyle dinner. Using a Johanna’s calm exterior against the Waste’s terror at what could be done with them, the entire piece simmers in a mystery over what will ultimately become of any given member of the kitchen staff. Terror flares up through a flambé for readers’ attention, but even as the situation comes to a boil not unlike Carlyle’s situation in X+68, it cools enough for readers to easily ingest as well, coming together into a marvelous dish. There is a small selection of well-done artwork provided by Lark and Arcas once again, but the vast majority of the piece sizzles and steams as it follows up from an already succulent main course, with Sturges as an excellent pairing to Rucka as gourmets in their own right.

Lastly, we have the back matter, supplied with the help of Eric Trautmann. From fake advertisements to rules for “Spitfire” Solomon and manned drones in the tabletop game, the background information helps a great deal toward making the world feel alive and the readers feel involved within it, on top of helping to expand the readers’ information regarding the technology and elements about the characters that may have been overlooked otherwise.

Final Verdict: 9.0– With a myriad representation of various forms of media and a good use of summary, “Lazarus: Risen” #1 flourishes in its new prestige format.