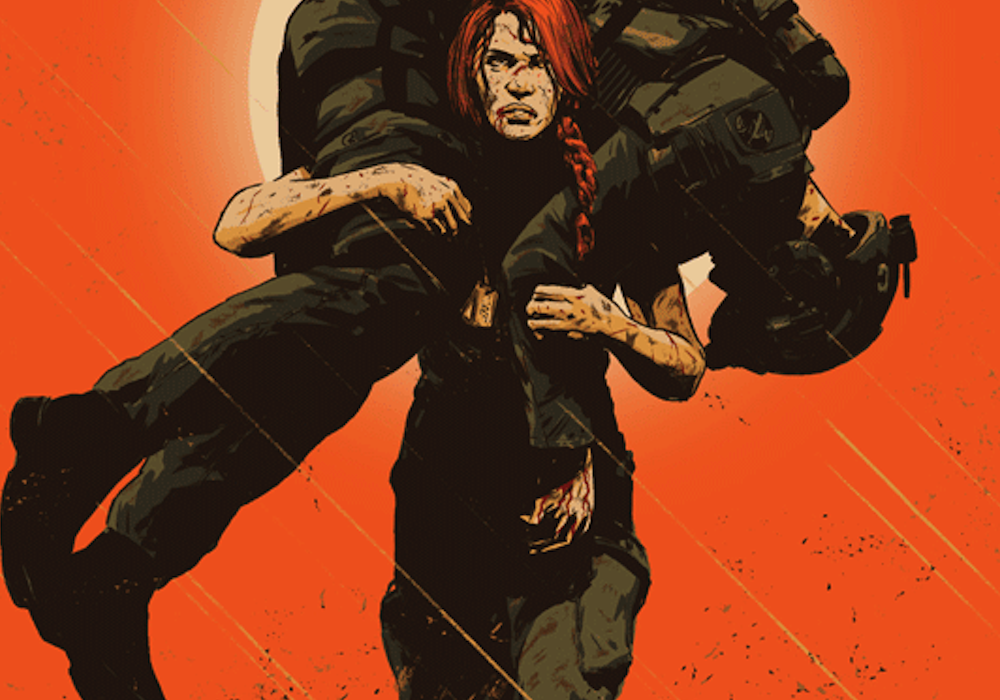 Full of grit, grime, and hardship, the very brutal training of the Daggers gives some of the best of the world of Lazarus in “Lazarus X+66” #1, showing that not only the Families are very capable. 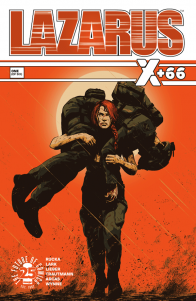 In the wake of “CULL” and setting the stage for “FRACTURE,” the sixth storyline of the critically acclaimed LAZARUS, this series takes us into the year +66 with six separate stories. Casey Solomon has caught the eye of the Lazarus, but gaining the Family’s attention can be as much a curse as a blessing. Will Dagger Selection destroy Casey, or will survival mean something worse?

As the focus of this miniseries is on some of the minor characters in the “Lazarus” series, Greg Rucka and Eric Trautmann do a very good job of showing the hardships that come with mere mortals living up to the “gods” that are the Lazari. Casey Solomon’s trip through Dagger Selection serves not only to give a thorough examination of the mentality of the elite Special Forces unit of Family Carlyle, but also to give an overall look at Sergeant Solomon as a person.

For the most part, the selection process seems to be rather by the numbers: the sergeants barking orders and insults, the incidental notation that Solomon didn’t have to go through nearly as much training as the rest. However, what sets this training apart is what keeps it interesting. First, on account of Solomon’s personal recommendation by Commander Forever Carlyle herself, there is very little focus on most of the candidates thinking badly of her for not working as hard. Second, the sergeants are actually relatively good natured and savvy to the goings on in the encampment, even noticing when one notable recruit seems to deliberately attempt to sabotage Solomon’s candidacy, and encouraging Solomon to go forward and prove her worth, acknowledging her as “special.”

The focus of the issue on the elite regiment allows Rucka and Trautmann to insert Forever in a relatively subdued way, barely even interacting with the issue and yet regarded with religious devotion by all of her soldiers. She is primarily spoken of, rather than seen, and almost all mentions of her (save for those of Solomon, who met her personally) are in calling her “God” and other comments with a divine basis. By presenting the central character of the primary series as some figure of holy might, the writers are able to flip a narrative of “weak soldiers versus a competent super soldier” into “competent soldiers versus a superhuman quasi-demigoddess,” even as Solomon insists that the Commander is not divine at all.

Rucka and Trautmann’s storytelling at times doesn’t even need any words. There are several pages for a montage of the sheer amount of work that goes into the selection process, all of which without a single word of dialogue. Through this method, rather than clog up the story with unnecessary dialogue, the actions alone are able to tell a story of an excruciatingly difficult process.

A rather interesting choice for a final comment is Trautmann’s inclusion of the schematics for a Dagger fighting knife, showcasing the most important piece of the unit’s arsenal and focusing in on the rigorous discipline forced throughout the issue itself. Even this schematic helps readers to get deeper into the world, demonstrating how holistically “Lazarus” deals with its storytelling.

Steve Lieber, taking up the pencils to give Michael Lark a break, shows that he is fully capable of a similar art style, albeit with his own tweaks. Lieber seems to use a rougher, grittier style than Lark, with more focus on the coloring than his line work, but this type of artistry lends itself well to the dirtier world of the Daggers, bereft of the luxuries of the Families themselves or the brutal grace of many a Lazarus. While Lark does a great job on the main series, Lieber’s pencils seem very much up to the task of this “lower deck” miniseries.

Coming back for the coloring, Santi Arcas shows why he has stayed on as the colorist of this series. A flashbang results in blurrier, brighter colors that seem to make the pencils unfocused as opposed to the clearer shading on other scenes, much like the characters’ own ability to pay attention. Moments in the dark are more calm and peaceful, whereas those in the light are harsh and unforgiving, giving the same impressions that would likely be felt by this unit, suited to fast strikes that would likely be primarily under the cover of darkness.

Jodi Wynne’s lettering is of special note. The writing’s thickness and the weight of the letters themselves both depend upon how clearly the voices are being heard. When ears are ringing, there is naught but a scribble, showing the same amount of disorientation that the candidates would feel in their situation and causing readers a similar amount of distress. Times when words are not clearly heard, but are still heard nonetheless, are given a soft weight, but are still legible, with the impression being that of someone needing to concentrate a bit harder in order to hear what is being said.

Though the combination of dialogue, artwork, and lettering, this first issue of “Lazarus X+66” shows the best of Casey Solomon, leaving readers wanting to know more about her future struggles and the life of the Daggers.