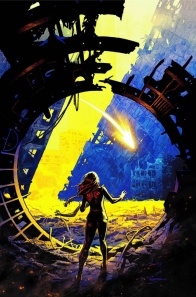 Brought to you by some of comics’ greatest talents, this epic story spans the course of 1,000 years and, for the very first time, connects all of DC’s future timelines! Starring the unlikeliest of DC heroes as she learns to cope with newfound immortality and roams through the disparate societies of Batman Beyond, Kamandi and Tommy Tomorrow, wrestling with her own inner demons and desperately trying to find her purpose in an ever-changing world. Do not miss this truly unique take on tomorrow’s DC Universe, all leading up to a special launch on the millennium!

This issue focuses on Rose and Thorn, the split personalities hero/villain that has been a supporting Superman character for many years. Rose has been keeping Thorn at bay for years due to medication, but there’s a catch: Rose is outliving everyone around her, and medical advances have lead to folks no longer suffering through this particular affliction, and so the medication is being discontinued.

And thus our journey through Rose/Thorn’s long life begins. This is an interesting character to grant immortality to for a few reasons, but the main one being that no one saw this coming. There are lots of characters who have flirted with immortality in their stories – Superman, Wonder Woman, etc – but this is very out of the blue. Not to mention that Rose and Thorn have been sparingly used over their history. I’m not criticizing the decision, in fact, I think it is an inspired one. It just isn’t what was expected, which is a good thing.

That decision somewhat reflects the path that Bendis takes through this first issue, bringing Rose/Thorn to some timelines that are well defined in DC history (the Neo-Gotham of Batman Beyond, the post-apocalyptic setting of “Kamandi, The Last Boy on Earth”), as well as others that are less well-trod, such as the setting where Supergirl is President of the United States (presumably before Terry becomes Batman, which somewhat conflicts with my understanding of Krpytonian aging on Earth, but who cares), as well as the world of Tommy Tomorrow, an obscure DC character that Bendis has resurrected for this story.

While all of these interludes are fun, and all beautifully illustrated, they all feel slight, and none exactly reveal any information after the first, Jim Lee-drawn President Supergirl story. There are a few neat moments in each vignette, but they feel like moments written to fit into these timelines, rather than tell a story that organically runs through these settings.

In the first section, we hear Rose explain why Thorn is about to re-appear, and then we get two stories in a row of Thorn adventures, before closing out on another Rose story. Bendis does a nice job in showing them as two totally different characters, and not simply two sides of the same coin. When Rose is present, Lee draws her as vulnerable and open-hearted. You can see the anguish on her face and the regret in her posture. But when Thorn shows up in Dustin Nguyen’s “Batman Beyond” chapter, all of that has been stripped of her, and what is left is a brutal, desperate woman who can’t get a grip on her own experience.

Nguyen and “Batman Beyond” is a perfect match from jump street, and Nguyen doesn’t disappoint. His aesthetic blends really well with sci-fi futurism, but he really shines when in the small character moments between a de-masked Terry and Thorn. This is the one moment in the whole issue where we see either Rose or Thorn somewhat resemble the other personality. Thorn is so let down by the fact that Terry isn’t the ‘original’ Batman, that you see her cold facade begin to crack.

The artistic highlight, however, is Andrea Sorrentino’s Kamandi chapter. Sorrentino is an absolutely perfect fit for this type of story, and doesn’t disappoint at all. Sorrentino’s segment is the least wordy, and Sorrentino uses the relatively spare script as a jumping off place to illustrate a setting that both honors the Jack Kirby original and brings something new to the world. Sorrentino draws an act of brutal violence in an elegant and beautiful way, and draws a Thorn that is getting desperate. Nothing she does or says is an over the top shaking and screaming insanity, but rather a woman at the end of her rope. It’s a moving passage that works better than anything else surrounding it.

It also is the only sequence that raised a question in the entire issue. When Kamandi says that an item doesn’t belong to her, Thorn replies “It belonged to my father.” I’m not going to spoil what the object is, but it seems reasonably certain that either Rose’s origin is about to get much more complicated, or she’s lying/intentionally misleading Kamandi. Either way, this was a rare moment of reflection in a book that is fun, though not very deep.

André Lima Araújo illustrates the final segment, which doesn’t do the returning Tommy Tomorrow any real favors. Sure, it’s a fine enough sequence, but Tommy doesn’t get anything to really do here. Araújo brings a Frank Quitely-influenced style to the futuristic, off-world setting, and Bendis uses this space to do his best Groundhog Day impression. Again, this isn’t bad; in fact, this whole issue is quite pleasant. But there is nothing here that will seemingly matter next month, nor are the sequences really worthy of standing on their own.

I’m sure that, taken in trade, this will read like a nice prequel to the “Legion of Super-Heroes” by Bendis and Ryan Sook, but right now, it’s little more than slight fan service. It’s fun, but not much else.

Final Verdict: 6.5 – A breezy journey through DC’s futures, but with little to really take away after closing the issue.