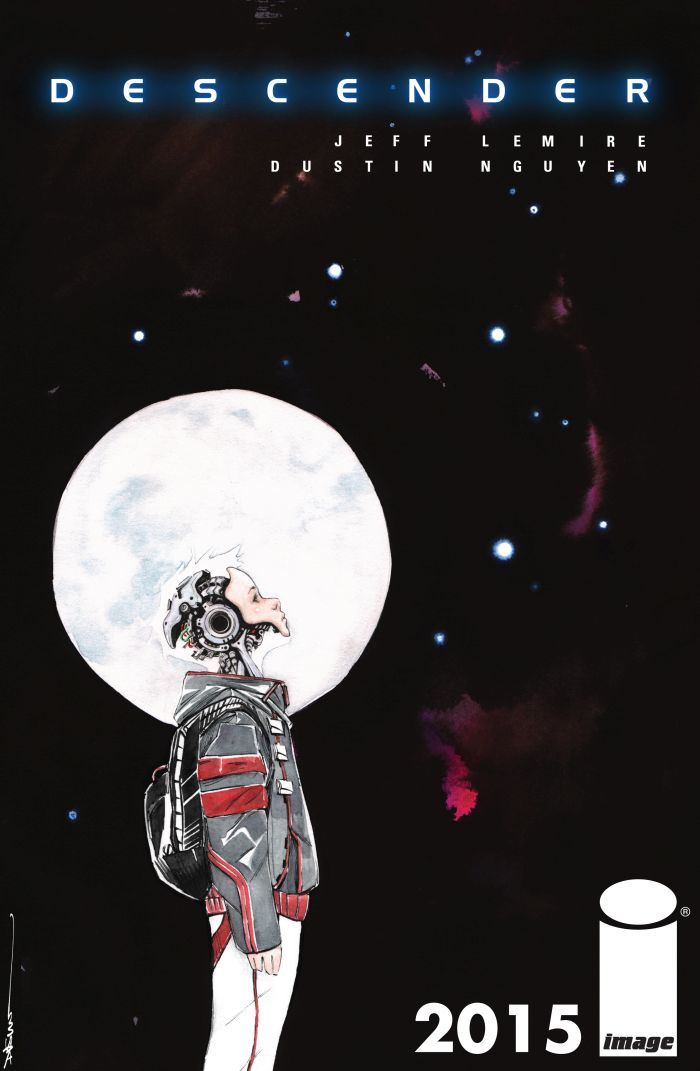 Jeff Lemire and Dustin Nguyen leave the comfy confines of DC Comics to voyage into deep space in their new Image series that is set to launch in March. Did it satisfy this reader? Well, you read the headline probably, so you know it’s a yes, but why was that the case? Let’s find out together, as we take a spoiler-free advance look at one of Image’s highest profile debuts of 2015. 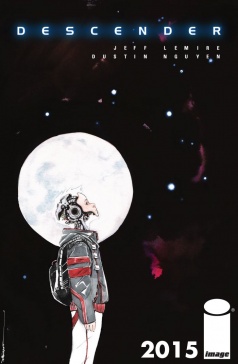 One young robot’s struggle to stay alive in a universe where all androids have been outlawed and bounty hunters lurk on every planet. A rip-roaring and heart-felt cosmic odyssey that pits humanity against machine, and world against world, to create a sprawling space opera from the creators of Trillium, Sweet Tooth, and Little Gotham.

In 2015’s comic industry, creator-owned comics may not dominate the sales charts, but they do draw the vast majority of critical attention for monthly comics, and they tend to generate the most awards and esteem from people. It’s easy to see why. The very idea of these comics is giving creators the leeway to tell the stories they want to be telling, and unsurprisingly, this often turns into comics of a high quality. It’s the same idea behind many of the best and most memorable films being passion projects and independent films rather than blockbuster, tentpole flicks. Sure, when it’s all said and done, more people go to see “Transformers: Age of Extinction” than “Boyhood”, but I think more people will look back on the latter fondly than the former. It works the same for comics, roughly.

Still, many creators haven’t made the leap in that direction, perhaps most notably artists. It’s easy to see why, as work for Marvel or DC is a guaranteed paycheck, and it also means a consistent one rather than facing several lean months before possibly making a bit of money after the book drops and building from there. More than with writers, artists take a significant financial risk by jumping into creator-owned.

Maybe that’s why we hadn’t seen the incredibly gifted Dustin Nguyen make the leap until now, with his new Image Comics title “Descender” with writer Jeff Lemire. He’s long been a DC guy, having worked in the past on books like “Batgirl” and “Li’l Gotham”, and he’s always shared his admiration for the Caped Crusader, so it’s not like he wasn’t doing what he loved already. But with his contract at DC at an end, Nguyen is taking the leap next month (the book arrives on March 4th, with FOC this week – get your orders in!), and I for one was hugely eager to see what he’d do on a title that was his own to create the look and feel of, especially with him working with Lemire on the project.

After taking an advance read of this book, it’s hard not to think that it was worth the wait in seeing Nguyen unleashed on a project like this, as this debut issue finds him in peak form. This comic truly looks like nothing else, and it finds Nguyen generating arguably his most electric output of his career to date.

Nguyen’s long taken his opportunities on DC titles to experiment with his craft, incorporating more and more watercolors and ink washes into his work as he’s moved along, and you can see the culmination of that development here. This story, which is a Pinocchio-esque tale of a young robot and what happens to him when much of the population of the galaxy is wiped out by great, mysterious robots, gives Nguyen many opportunities to play to his strengths. Tremendous character work, big, imaginative splashes, and true depth of vision are omnipresent, but what really makes this book stand out is how Nguyen uses those watercolors and splashes amidst white space on the page. He often uses them as tonal emphasis, never going over the top with them and saturating the page, rather fueling panels and pages with gorgeously textured and often subtle color choices. Watercolor can be a gift and a curse, but in Nguyen’s hands, it’s nothing but the former.

One potential issue for the book lies in the fact that this type of art, which can often be sparse and fairly monochrome at times, isn’t for everyone, but like with those aforementioned indie films, this isn’t a book for necessarily everyone. But those who like this book visually will love this book.

It helps a lot that the story itself is a deeply fascinating one, interestingly enough reminding me mostly of the feel of Marvel’s “Annihilation” event (both in terms of plot and tone). Lemire and Nguyen combine to make TIM-21, the robotic lead of the series, and his creator Jin Quon two easy to be interested in characters. Oddly enough, they’re for hugely disparate reasons, as the former intrigues because of his pure innocence hiding a potentially dark secret, while the latter draws us in with his deeply flawed genius. Lemire’s a master of characterization when he’s on, and boy, he is on here.

I won’t reveal any plot details, but the hook of the story really gets you. Every debut needs a good hook, and the team delivers one that works tremendously well here, especially considering how quickly you as a reader attach yourself to its main cast members. Image is releasing a lot of creator-owned titles right now, and by the end of the first issue here, it’s completely clear that this one sets itself apart from the rest.

Lemire and Nguyen prove themselves to be a potentially great partnership after just one issue, and in this debut, they deliver a gorgeous and unique issue that leaves an indelible impression. “Descender” #1 looks to the stars to give readers the world, but it is the ability of the storytellers behind it to take us into the hearts of its leads that truly sets this book apart. That and one hell of a creator-owned debut by Nguyen, who looks like he’s on the verge of taking his art to another level by taking it in a different direction. You won’t want to miss this comic, folks.

Final Verdict: 9.0 – Lemire and Nguyen are onto something special here