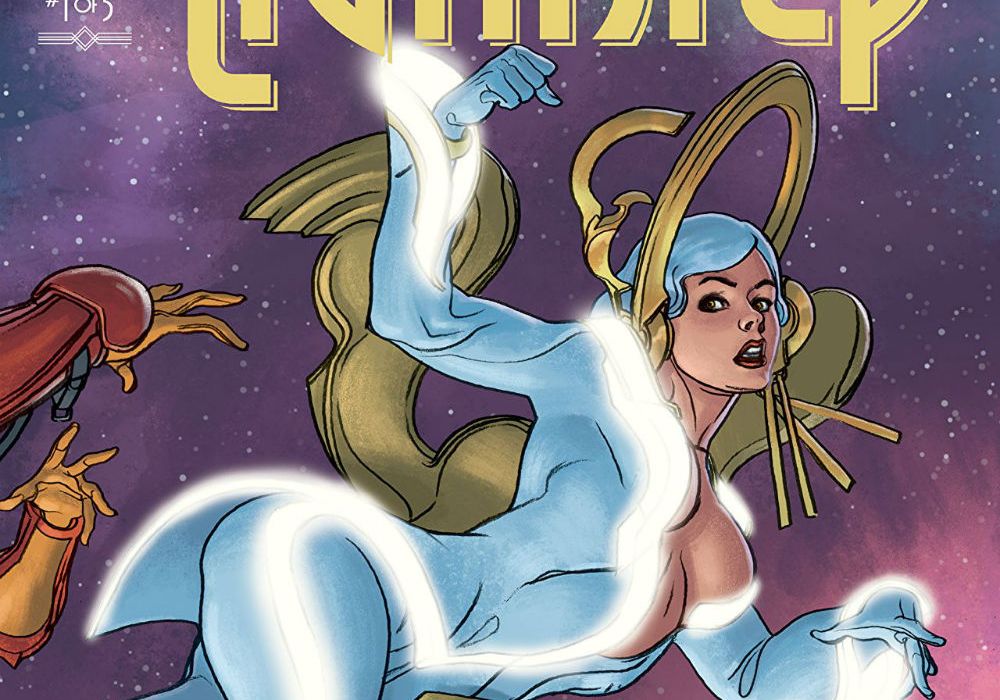 “Lightstep” #1 introduces us to an extremely beautiful race of advanced people living on a privileged planet at the pinnacle of innovation, excellence, and supremacy – too bad they’re so focused on genetic purity, eh? Mild spoilers ahead. 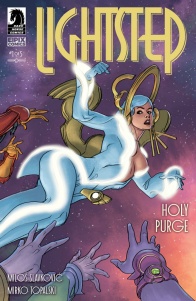 Written by Miloš Slavković & Mirko Topalski
Illustrated by Miloš Slavković
Lettered by Andrej Bunjac
January Lee is of royal descent, part of the ruling class that lives out their lives on accelerated, ”Lightstepped” worlds where a single day is a lifetime on a normal planet. But her ”holy ailment,” which allows her to see the truth behind the Primogenitor’s lies, marks her for banishment to the outer worlds.

Wryness aside, the Lightstepped world is a unique and interesting concept, linked directly as it is to our own timeline through a very explicit mention of a famous Earth figure. Slavković & Topalski do well in our first foray, though issue #1 does deliver some narrative bumps along the way.

There are some solid moments, like a beautiful double-page spread detailing how a single day for January encompasses a lifetime for other, less fortunate beings on outer worlds. We get some insight into January’s character as sensitive, introspective and (possibly) kind, at least as compared to her peers, though not enough to establish her as a particularly strong protagonist. The gladiatorial reenactment scene measures out nicely, but the tragedy of the following moment’s lost because I’m not entirely sure why a people so obsessed with genetic excellence would allow Calud to survive to adulthood, much less participate in a ritual celebrating the pinnacle of their fascist society. Slavković’s aesthetic highlights physical beauty, but it’s unclear if nepotism’s a factor privileged above blood purity in the narrative itself. Is it a false assumption of mine as a reader, or a mixed message? That question lingers in my mind and pulls me out of the book for a moment to lessen the shock value.

January’s transgression is so grave and anathema to her society, in fact, that she’s immediately booted off her planet in the final pages of issue #1. Slavković and Topalski step through this scene in just one page, which is a little quick given the measured pacing throughout the issue, and January’s unique ability to connect directly with the Primogenitor. What’s given great narrative shrift at the beginning of the book suddenly doesn’t seem to matter. It’s not so jarring that it ruins the entire work but the discord’s there, and January’s final verbal callback reads a little flat when it should be the issue-ending punch that tides us over until the next installment.

What elevates this book out of its narrative blips is the art. Slavković brings precision and a lot of physical beauty to bear as you’d expect, as well as unique character design. There’s a definite Art Nouveau aesthetic to this alien world that’s more common in European comics, and it’s a nice effect. Character expressions are very finely detailed, and every piece of clothing, equipment, and architecture embodies grace and elegance. Similarly, Slavković chooses a pastel color palette that suits his precise line and does a lot to enhance January’s world. It’s a shining, idyllic paradise that’s only marred by fascism, bloodsport, and twisted cultural lies, but even the blood is rendered in a pleasant, rosy wash.

Plot and structure issues aside, digging into the art yields some rewards. Dropping a level deeper, it’s not so common to see the Übermensch concept rendered with feminine elegance, and the effect is so good it makes me wonder how reliable a narrator January is. Is this her idealized interpretation of her homeworld, or is it how it actually appears to others? I don’t always wonder about POV without explicit narrative directives to do so, so I have to tip my hat to Slavković & Topalski for pushing me a little further. January’s sojourn into the unknown also offers the team a chance to mix up their style on other worlds if they desire, so I’m curious to see what happens as the book progresses.

Slavković & Topalski mostly balance narration with page structure and style so Bunjac’s lettering can recede into the background, but there are some issues. To the team’s credit, we learn a lot about the Lightstepped worlds and the Primogenitor’s history through January’s narration, which should overwhelm on its own but doesn’t because of the rich art and nuanced backgrounds. This is hard to pull off. However, because the color palette is light and the backgrounds are also bright, color or texture differentiation between boxed narration and dialogue in balloons would ease eye strain when they’re together on the page. The last third of the comic features multiple voices, which is difficult to follow in the daytime arena setting. Additionally, the black word balloons from the announcer during the reenactment scene are harsh, and it’s the only time they’re seen in the whole book.

I have no idea what’s in store for January Lee as she sets forth from her gorgeous, deeply flawed homeworld. Who will she meet? Will she come back, and if she does, will it be the same society she’s left behind? While these questions are a little too open-ended as the first issue stands, I’m interested enough to pick up another installment to see what kinds of creatures, perils and dramas await.