Watters and Wijngaard’s surprising new start-up’s second issue proves that this story might have some serious legs. That is, if video doesn’t kill their comic-book star first. 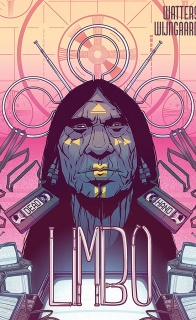 Our detective’s open and shut case takes a turn for the surreal as he discovers that in Dedande City even watching television can be deadly. Join us on a cathode ray fuelled nightmare to the centre of the televerse. We’re through the static now…

I picked up the first issue of “Limbo” on a bit of a whim. The title was vague, but enticing, and the cover was arresting enough to warrant a closer look. I’d not read anything about it before, and as with a lot of independent #1’s, I wasn’t at all sure what I’d find inside. But I definitely wasn’t expecting was a slick, self-assured first issue that drew me into an 80’s revivalist, neo-noir nightmare and left me longing for more.

Issue one managed the tricky balancing act of world-building and narrative pursuit pretty much perfectly. Watters and Wijngaard introduced us to amnesiac private investigator and protagonist Clay, damsel in distress/femme fatale Bridgette, masked Mafioso ‘The Thumb’, and a host of supporting characters, quickly setting up a host of believable and lived-in relationships, while ensuring that the reader feels the full force of the secrets these characters are clearly holding. This is all accomplished alongside glimpses of the world of ‘Dedande’, a backwater town that interweaves mysticism, mystery, and copious amounts of magnetic tape, to create a highly stylised playground in which the story’s narrative can unfold.

Issue one moved fast and covered a lot of ground, establishing the tone of the town and touching on the connections of its inhabitants. Issue two changes things up somewhat, deviating slightly from the investigative sprawl of the first issue in favour of a more introspective look at the mystical side of Dedande. Last issue, Clay managed to catch The Thumb red-handed (hah) smuggling illegal goods, and caught the whole thing on film. This issue sees him decide to watch the incriminating video before submitting it to the proper authorities. And that’s when things start to get weird.

While issue one hinted at a level of strangeness under the surface of Dedande, issue two dives right into it. Or rather, it gets sucked into it. Clay finds himself pulled into the TV screen and into a series of worlds within worlds, as imagined through the lens of popular televisual styles. Watters seems to be attempting to defy any classification, slipping loose from the bonds of police procedural and sliding straight into psychodrama.

Watters drags Clay through a series of recognisable televisual styles, picking up the pace and upping the bizarreness as he goes along. All the while Clay is dogged by the looming voice of the mysterious ‘Teleshaman’, a figure who’s nebulous power over the airwaves draws some eerie parallels between the receptive state of astral projectors and the mental vacancy of the channel-hopping masses.

Watters has compared Clay to Gregor Samsa, and there’s definitely something Kafkaesque in the way Clay reacts to his increasingly manic situation. He’s detached, dreamlike, and weirdly accepting of his fate, even as he wrestles through a horde of deranged Looney Tunes knockoffs. As the issue rolls on, Watters even manages to slip a little ‘meta’ into his metaphysical narrative, examining the limitations of televisual magic by having Clay (and his land-lady/Loa summoning friend Sandy) experiment with technology to try and combat the Teleshaman.

The weirdness of this issue wouldn’t be possible without Wijngaard’s stellar artwork. After spending most of last issue developing a slow-burning, sinister universe, he proves he’s equally able to conjure up whole worlds in the space of a couple of panels. Wijngaard leaps from blaring neons to stark black-and-white, to ethereal static with ease, and manages to encompass a whole range of recognisable genres without any of them clashing with the oneirism of the book’s 80’s noir-inspired roots.

As this issue focuses heavily on televisions and screens, it’s also interesting to look at how Wijngaard’s panels evolve throughout the issue. Issue two begins with the larger, more atmospheric panels that characterised the first issue but, as Clay slides further and further under the Teleshaman’s thrall they start to change. The panels are broken up into smaller and smaller, purposefully disjointed sections that lend a further sense of dizzying unreality to Clay’s journey.

When compared to the tight, all-encompassing opening issue of “Limbo”, issue #2 might feel a little less narrative focussed. It centres on a singular event, offering up one or two pieces of information but somehow leaving you feeling like you know less about the world of Dedande than before. This level of detail orientation is a distinct change of pace, but one which hopefully marks the creative team’s confidence that there is more than one short story to tell in this universe. If issue one was the pilot (scrambling to give its audience an overview of the world at large) then issue two is the first commissioned episode; slower, stranger, luxuriating in the world it’s created, and with an overarching plan hidden just out of sight, waiting to be realised.