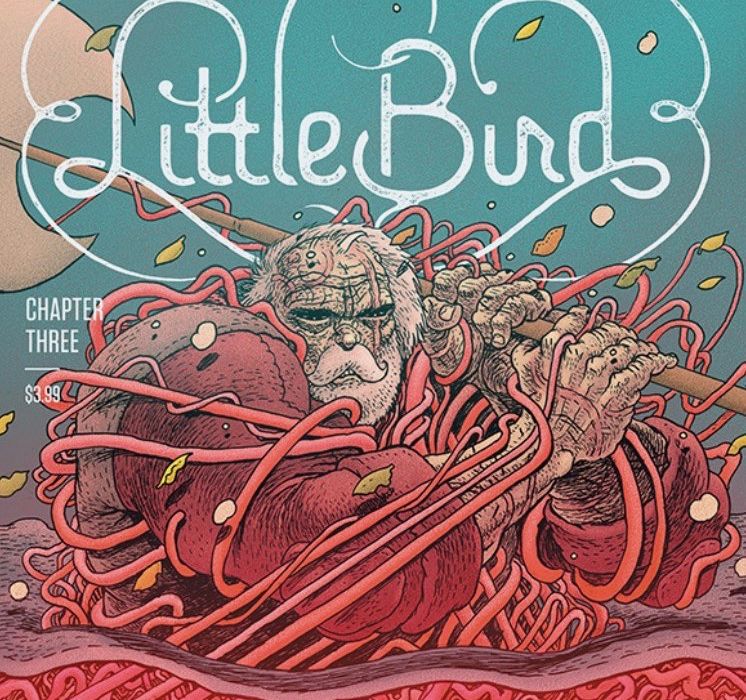 Despite a stellar visual aesthetic and outstanding design, the first two “Little Bird” issues were a little heavy on exposition. “Little Bird” #3 changes everything with and action-packed script full of dramatic twists and turns. (Warning: may contain minor spoilers.) 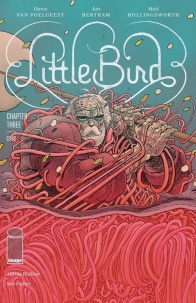 Axe leaves Elder’s Hope to destroy Northern Guard, and Little Bird is left behind to take out a small team of enemy soldiers when she stumbles upon a family secret that changes everything.

Reading the solicit copy above, with no additional information, you’d be forgiven in thinking that Ian Bertram and Darcy Van Poelgeest’s “Little Bird” is a pretty straightforward action-adventure miniseries. Soldiers, rebels, secrets, a place called Elder’s Hope…. Sounds an awful lot like boilerplate Worldbuilding 101. Well, I can assure you, in direct contrast to how the marketing copy may sound, “Little Bird” is anything but a “typical” action-adventure comic – and issue number 3 is where it all starts to come together.

One of the first things that makes “Little Bird” feel so different is its oversized page count. With 114 pages of gorgeous, meticulously rendered content through just three issues – a page count that essentially rivals many trade paperbacks that collect 4 to 5 standard issues – the book’s scale is decidedly epic. Even better, Bertram and Van Poelgeest don’t simply fill the additional pages with gratuitous fight scenes or add additional layers of prologue and backstory. Instead, they let the comic breathe, allowing the reader to fully absorb and appreciate Bertram’s incredible inks, as well as Matt Hollingsworth’s captivating color palette and Aditya Bidikar’s world-class letters.

Indeed, the book’s overall aesthetic is quite different from the majority of other serialized comics, especially those published by the Big Two and even many of the more mainstream books from Image, Dark Horse and the other indies. Bertram’s generally moody, often fantastical character designs and otherworldly architecture is more representative or suggestive than it is literal. Even in panels and pages that contain a high level of detail, the illustrations tend to evoke a visual ambience or tone more than actually show it in concrete terms. The sequencing is spot-on, supporting the narrative well, but at the same time, the visual grammar often feels weirdly foreign or even slightly incomprehensible – in the best possible way. This is a world and a story that is eerily plausible, yet even when it incorporates seemingly familiar elements and imagery, it keeps the reader slightly off balance, continually challenging and undermining expectations.

Over the first two issues, the book’s art was a consistent high point, both driving the story forward and inviting the reader to linger over captivating visual details and stellar page designs. In “Little Bird” #3, Van Poelgeest’s script intensifies substantially, rising to the rarified heights hit by the artwork right from the start of the series. With tightly written scenes that intercut between ambushes, double-crosses, reveals and escapes – all with plenty of bloodshed – Van Poelgeest unleashes a torrent of action that culminates in a harrowing, completely unexpected cliffhanger.

The previous two scripts unfolded in sparse, meditative, often lyrical soundbites, accentuating the visual mood perfectly in many ways, but they were also surprisingly heavy on backstory, worldbuilding and character development. In the end it essentially felt like a very stylish and poetic info dump. The book’s art clearly led the way, relegating the script to the backseat, given the unglamorous task of arranging the pieces and setting the plot in motion.

Here, in the middle chapter of five, Van Poelgeest’s action-packed script raises the stakes perfectly, from the first page to the last. Whereas in previous issues, brief moments of intense action sporadically punctuated longer scenes imbued with political intrigue and socio-religious power dynamics, in chapter three the opposite is true. Without question, theocracy is still a key theme, but violence is no longer implied. Now, it’s a thoroughly devastating, intensely bloody reality. Meanwhile, with the introduction of one completely new character, as well as other minor characters who’ve stepped up to claim bigger roles, storylines are converging in unexpected ways as everything starts to boil over.

In hindsight, the creative team played seems to have timed things perfectly. The level of intrigue is peaking while a series of new questions comes to the fore. The mythos is well established, the protagonist is in crisis – with two issues left to go, things are well positioned for an exciting finale. Put “Little Bird” on your pull list and experience it in real time.

Final Verdict: 9.0 The visual aesthetic has been outstanding right from the start. With an intense, action-packed script, “Little Bird” #3 brings it all together, living up to the full potential of this exciting miniseries.