“Little Bird” #4 posits that the dream, finally, might not be enough. Warning: minor spoilers ahead. 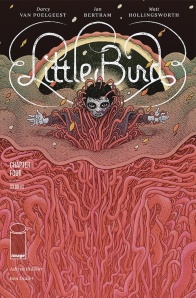 Cover by Ian Bertram
Written by Darcy Van Poelgeest
Illustrated by Ian Bertram
Colored by Matthew Hollingsworth
Lettered by Aditya Bidikar Held captive at New Vatican, Little Bird endures endless medical examinations to procure the “resurrection gene” for Bishop’s dying son. If Little Bird wants to escape this nightmare and save her people, she’ll first have to confront a dark family secret. The penultimate issue of the LITTLE BIRD saga contains 30 pages of story, and a pin-up gallery by a variety of artists..

“Little Bird” #4 is our penultimate journey into the world of Little Bird and Gabriel, and what a journey it’s been so far. After the explosive action in issue #3, we expect a bit of an interlude, and we do get one. Just not quite a balm to soothe the troubled soul. The best thing about “Little Bird” is that nothing is safe. No character is beyond death, no ideal too pure to be tarnished and no faith too strong to be shaken. No life too precious to take, because Van Poelgeest and Bertram explore hunger in this issue in an adept, cruel and crystalline way. Much as J.G. Ballard exposes the belly of our civilization not just in edifice but in its very conception, Van Poelgeest and Bertram are examining the cost of existing under the yoke not just in the physical toll, but the weight on the human soul. For some, especially Little Bird and her people, it’s far too high.

Van Poelgeest and Bertam have steadily built Gabriel’s character toward an unknown end. Though none of the archetypes in “Little Bird” are necessarily unfamiliar, their paths and actions are surprising. In this issue he has a chance to upend the balance of power between himself and his father, but doesn’t take the direct route. Similarly, Little Bird bouncing between the land of dreams, the dead and the living was hard to anticipate as well. We expect a young, competent and hungry protagonist and the pitfalls that come with that trope in so many other stories, but what we get is an experience that’s more than the sum of any one perspective. We see the little girl as the tent pole and the lost icon without pity or idealism, only deep sorrow from experiencing the ugliness of her diseased reality. The simplicity of the dialogue and thematic repetition in issue #4 wouldn’t work as well without Bertram’s visuals, but we have them and so it resonates.

As solid as Van Poelgeest and Bertram are in their story building blocks, “Little Bird” is one of those singular comics that uses its style to produce actual substance. Bertram’s art is exceptional, and rarely is there a colorist so in tune with a book’s connective tissue as Hollingsworth. By framing each panel to incorporate as much of the strange and horrific world as possible, Bertram textures our reading experience with almost impossible detail. Every bullet, every character and every corner and flagstone and object on the page matters. Bertram’s narrow horizontal paneling fixes his subjects with the precision of an entomologist fixing a butterfly in a display, but also creates urgency. If the lens were a little wider, the page a little bigger, maybe we’d see something more at the edges – hope? Hard to say. Hollingsworth’s color palette sears those vignettes into our eyeballs. The gentle forest colors of Little Bird’s dream give way to the harsh neon technology of her prison, and the dismal greys and blues of the New Vatican pay off in a massive way thanks to this issue’s splash. Hollingsworth wraps the horror of that moment in the steely, unforgiving light of dismal order. The high irony of the apostasy present at the heart of the New Vatican’s dogma is, again, something that we’ve seen elsewhere, but the punch that particular visual packs is exceptional. And the omnipresent gentle porcelain of Gabriel’s mask is designed to haunt us from issue to issue, with great success.

Bidikar’s work impresses, although that’s a poor word to use for a letterer at the top of his game. It’s impressive not because he hasn’t demonstrated the skill countless times in the past, but because “Little Bird” is such an intricate visual piece. Digital lettering over art that’s so meticulous could ruin a comic, but Bidikar pays careful attention to Bertram’s panel outlines and his drawn sound effects. Bidikar’s additions enhance the work without disappearing into the background. Reading in “Little Bird” is a unique experience, not just because Little Bird’s narrative boxes are done in a written style, but because the whole story feels so impermanent. There’s little indication that the rebellion, or even the New Vatican, will survive this story, so the window into these events feels ephemeral and tenuous. Bidikar’s style gives it a slight permanence and oomph that helps sell the odd, transitory experience and its possible doom. We wonder a bit about those narrative boxes – who’s telling us this, and when? That’s a subtle touch great lettering can bring to the comics experience.

The road ahead is uncertain, and what a delightful place to leave off. “Little Bird” #5 has a lot of pressure on it to deliver a satisfying ending, but the team’s done nothing but inspire confidence so far. It’s hard to surprise dedicated comics fans. There are only so many stories, so many characters and so many ideas that make it through the sinister net of sales figures to survive internet hot takes, so when something like “Little Bird” comes along with a deceptively familiar premise and delivers a singular experience, we’d all best take notice. That this comic knocks our socks off with such an exceptional and consistent level of craft from the entire creative team is rare, indeed.

Final Verdict: 9.5 – “Little Bird” #4 dazzles as it edges us closer to potential doom, with exceptional visual storytelling and craft from the entire creative team.