“Little Bird” #5 is the end of an era, and a miniseries, and a lot of things. Fortunately, the ending’s a good one, and more importantly, it’s meaningful. 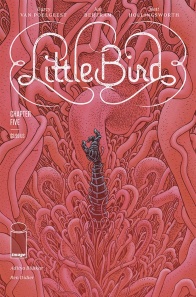 Cover by Ian Bertram
Written by Darcy Van Poelgeest
Illustrated by Ian Bertram
Colored by Matthew Hollingsworth
Lettered by Aditya Bidikar MINISERIES FINALE! An unexpected alliance could turn the tide for Little Bird’s people and put an end to the long war between the Canadian Resistance and Bishop’s theocratic regime. But will it be enough? Find out in the epic conclusion of one of this year’s hottest books!

“Little Bird” #5 sees the conflict between Bishop and Little Bird blossom into a full-blown battle for the fate of Elder’s Hope. Everything is on the line – Little Bird’s decidedly alone in the world, given Gabriel’s sacrifice, and Bishop’s world is crumbling. All that they can count on is a final push against each other. But where Bishop’s faith burns away to reveal its true roots – zealotry, arrogance and, ultimately, fear – Little Bird remember her ties to the land and the dream. And that makes all the difference.

Van Poelgeest and Bertram have created something very special in “Little Bird,” and the main hurdle in this book is its precarious balance of plot intricacy and abstract visuals. The tendrils, the technology and the dreams help deepen the impact of what is, at its core, a very simple story, but Van Poelgeest and Bertram also populate “Little Bird” with a thick layer of stunning characters. Every single person has a physical detail that matters and a unique role to play in the ultimate conflict, which leaves us with a final issue that has a lot of ground to cover. “Little Bird” moves between the grand and the personal at a quick pace, and as Betram crafts each page with breathtaking detail, the risk of losing the thread looms.

However, the creative team is up to the challenge and chaos never quite wins out, though one moment in particular is a bit of a close call. As Bishop stands over a wounded Little Bird, the blood trail of the soldier who’s defected blurs together with Little Bird’s crumpled form. The page almost overwhelms, but the moment quickly crystalizes into a very satisfying explosion. There are some story beats later on that feel like they crowd some of these high action moments of clarity, but Van Poelgeest and Betram ultimately save the story by remaining true to Little Bird’s focus and by delivering an emotionally satisfying ending.

Betram makes good use of this series’s trademark slender panel work to fit a lot of action onto each page. The scale of the conflict has to be big, because we’ve been working toward it for four issues, and everyone gets a moment. Hollingsworth brings the entire palette of the series together in issue #5 for an absolute riot of color and visual interest, but there’s just a touch of disappointment about losing the crispness of constraint in previous installments. Hollingsworth’s skill on this book has been absolutely top notch, and there’s nothing wrong with the palette chosen, but it’s easy to miss the tension and deliriousness of earlier issues. The main throughline, as always, is the blood, and there’s a good deal of it to reckon with as “Little Bird” shudders to its conclusion. All of the tech is on display and there are small callbacks to what we’ve seen in other moments – the fire, the light panels and even the beams in Little Bird’s cabin all recall moments with the Axe, Tantoo and Gabriel in previous issues. Bertram and Hollingsworth work seamlessly throughout these five issues, and it’s necessary to laser in on finer points on a book like this because of the exceptional talent and delivery of the entire creative team.

Bidikar’s lettering is up to its usual standard, which is, in a word, high. The more intricate the artwork in a comic, the more difficult a sell balloons can be. Bidikar chooses a font and a balloon stroke that work beautifully with Bertram’s intricate and precise line, and don’t fight with Hollingsworth’s pastels or deep shadows. However, Bidikar’s lettering isn’t just designed to blend seamlessly with an aesthetic that already exists, because Bidikar has a keen sense of style and knows how to bring the art of lettering to life on the page. The ragged pages of Little Bird’s narration pay off in a big way as we learn that Little Bird is recording her life story, and those pops of intense storytelling matter more because we know they’re on the page by the labor of her hand. She’s survived, and it means a lot to know that from the beginning, she’s been shaping our experience directly. All of this emotion comes through in her small but sure script on its economical, simple lined paper, and all of this is down to Bidikar’s design sense and artistic choices.

And now we can breathe a collective sigh of relief, creative team and audience together, that “Little Bird” is from start to finish an exceptional piece of work. Issue #5 flirts with chaos in some ways but carries off a beautiful, strange and deep story about the power of our ties to the land and the terror wrought by institutionalized zealotry. Little Bird endures through turmoil, heartbreak and physical and emotional violence because of her single-minded purpose and her unshakeable sense of identity, just as Bishop falls because of his arrogance and hollow soul. “Little Bird” takes risks in its storytelling and how it’s constructed as a comic, and it’s a triumph.

Final Verdict: 8.5 – “Little Bird” #5 brings an overwhelmingly sophisticated and nuanced tale to a close with a powerful final issue.