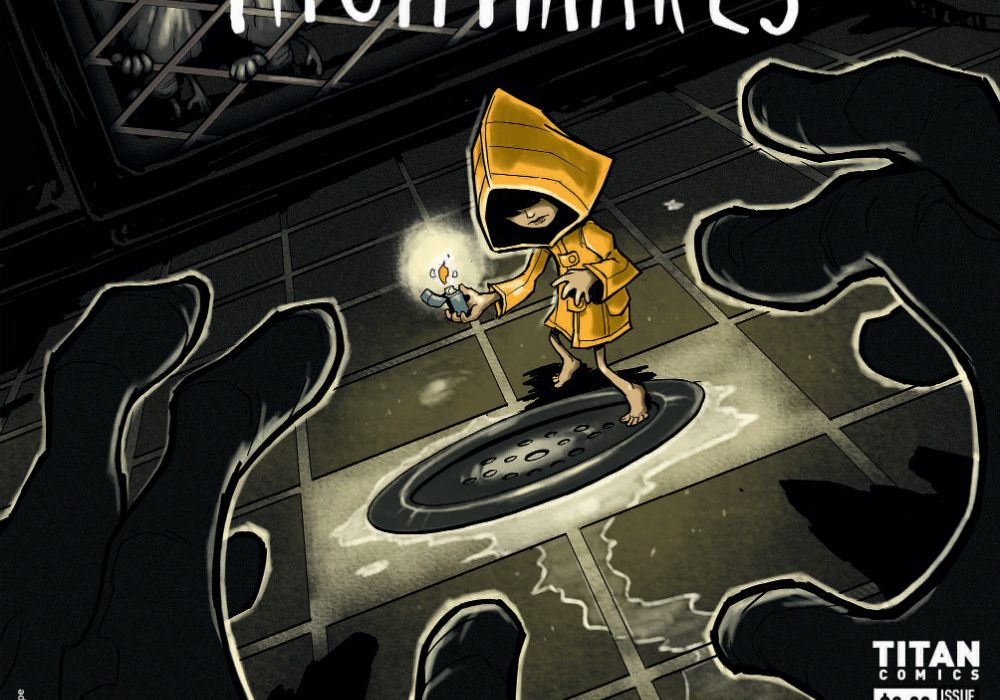 Little Nightmares released as a PS4 game in April – a fact I didn’t know until recently. The charming indie-like game was met with warm reception, so although video games to comics isn’t always a smooth process, delving into a comic adaptation of this property was too good of an opportunity to pass up. 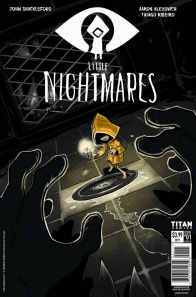 ENTER THE TERRIFYING AND UNPREDICTABLE COMIC SERIES BASED ON ONE OF THE MOST HOTLY-ANTICIPATED GAMES OF 2017!

THE GAME FOLLOWS SIX, A YOUNG GIRL IN A YELLOW RAINCOAT, AS SHE EXPLORES THE HORRIFYING WORLD OF THE MAW, LOOKING FOR A WAY OUT!

This comic is a real structural enigma to me. Upon my first read (in which I had no idea about the context) I was entertained but baffled. I’m not sure who the audience is for this, but there is little to no concrete setting or detailing to let me know where I am or what’s going on. Which is annoying for me as what I could grasp was very compelling. I think the same argument can be said here regarding the translation from Dark Souls to comics. This is a game which is deliberately vague to have you search and pin down elements of the story through gameplay. To convey this through the comic book medium though is a lot harder, and the intrigue has been lost in translation somewhere.

What Shackleford, Paknadel and Watters have executed here, however, is still a valiant effort. The creepy tone of the game is well established throughout with the restrained storytelling. The sequential storytelling here emulates the constant unavoidable horror seen in the original game. This works in the ‘Impossible Man’ scene, which has the title character’s giant hands creep up behind our protagonist, Six, as he swipes at her before reeling in disappointment at missing. It conveys a high-tension horror that keeps your heart pounding as you follow Six’s petit form throughout the book.

Another thing that does work here is the introduction of lots of key, intriguing characters that all play a role. As I said before, the writers keep details ambiguous, not giving you a lot of context besides what you take from the visuals. This does work for readers hungry for information, however, as the writers drip feed you details about these characters, like the long faced detective man (these guys aren’t named, I’m trying my best!) who appears to be a butler-esque antagonist for the whole issue. That is, until we see him offer a helping hand to the protagonist at the end of the issue, subverting expectations and making you beg to know more about his motives.

However, the issue’s structure doesn’t flow seamlessly to help what good points you can draw from the book. With little to no details about the context, it becomes jarring when the setting jumps rapidly between scenes. Every time the scene moves from Six congregating around the fire with her comrades, it does so without much build up to prepare the reader, disregarding the first instance which does cleverly ask “how did you get here? What have you seen?”. I’m talking about instances that jump from Six talking with her comrades, to Six surrounded by a pack of grotesque beings, to Six falling in between panels and also a Kabuki-masked woman? It’s just that these events occur in the space of roughly three pages, suggesting that the book needs to be more evenly paced.

Aaron Alexovich’s rendering of the Tim Burton-esque stylings of the game carries a lot of the weight in the issue, especially considering it’s visual storytelling priorities. What’s so compelling about this is the way the panels are constructed to convey the chaotic nature of the story. Right from the first page, Six is being tipped backwards and forwards by the angling of the panels, almost as if the book is being shaken, as she tries to escape the clutches of the mad chef. It’s a go way to throw readers right into the deep end before telling them more. Further along in the book, we get a sequence of Six falling outside of the panels into a kabuki mask which is more telling of her inescapable situation than the exposition. It’s beautifully rendered, giving us flashes of each scene Six explores as she tumbles over them.

Alexovich has a great mastery of scale in this story, adding a lot to the subtle horror tone of the issue. Six, who is significantly shorter than her adversaries, is our viewpoint for the issue, so we experience the terrifying, wrinkle-faced occupants of the world, their eyes bulging and skin quivering and cold. There’s no jump scares – something that generally fails to work in comics, anyway – a lot of the horror is conveyed through this constant sense of unease that everything is bigger than six and able to crush or harm her with minimal effort. The Impossible Man’s wriggling, wormlike fingers appearing behind Six in his scene is terrifying just because of Alexovich’s attention to detail of something usually mundane.

There’s a whole dream-like quality to the art that works especially well in the second half of issue, ‘The Tale of the North Wind’. Alexovich sets up the world with an industrial feel to it, working well with Thiago Riebeiro’s muted colour palette. His storytelling is reminiscent of Chris Riddell’s work on Neil Gaiman novels, with angled gothic architecture drawn into the creaking barn. What works best is how this scene transitions two pages later to a chaotic, red strewn scene with crows flying away from it. Alexovich makes the reading process flow nicely with as wind patterns and wood grains move with the direction of the reader’s eye.

Riebeiro’s colors, as previously mentioned, largely consist of a muted palette, but with splashes of vibrance to highlight Six and other features of the narrative. It’s a great way to focalise the protagonist of the story, and to show how contrasted Six is from the drab world around her. It’s interesting to see how he switches overall tones from scene to scene, with greys and beige occurring during The Maw setting, deep blues in the rainy outside environment, and an infected green in the ‘Tale of the North Wind’ setting. It helps the art to give you a sense of setting when the dialogue doesn’t do a lot to place you.

“Little Nightmare” #1 is an oddity to me. On the one hand, I’m often confused and bewildered when trying to recall what actually happened and where this is set. Nothing is concrete and a lot, almost too much is left to the reader’s imagination. However, the art, subtle telling exposition and beautiful colors work poetically to deliver a pleasant reading experience that will no doubt impress fans of the PS4 game.

Final Verdict: 7.1 – Fans of the game will get the most out of this, but “Little Nightmares” works well as a nice visual piece, regardless of how confusing it can be.