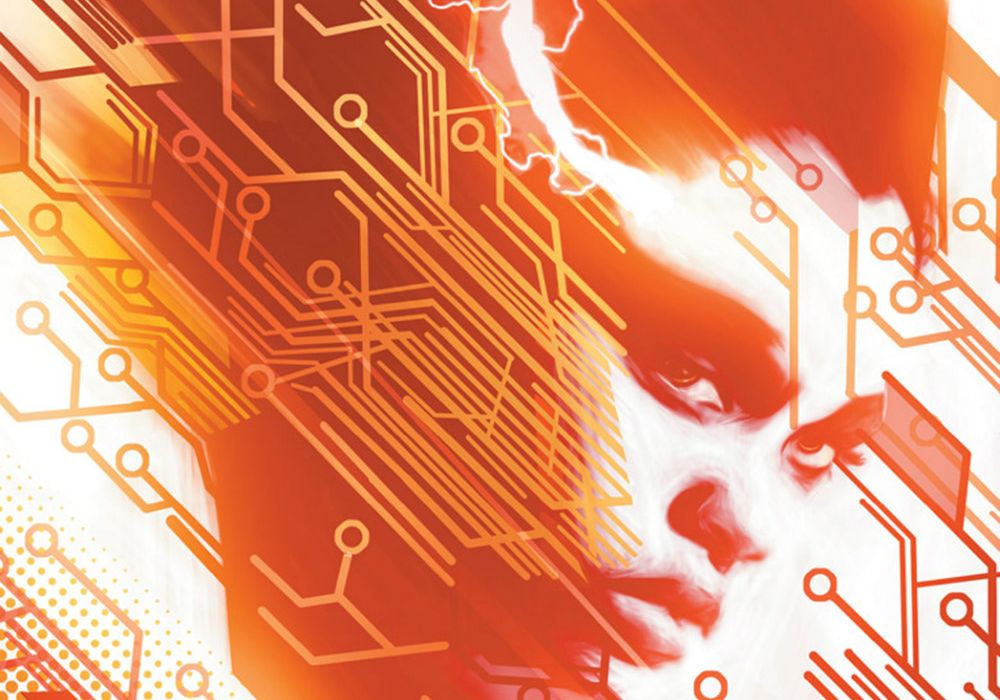 Livewire has been stuck right in the fray of the Valiant Universe since the reboot in 2012. She’s a tough, morally flexible character who’s been conveyed as incredibly layered and interesting, and surprisingly has never had a solo series until now. Under the wing of recent writing star Vita Ayala and regular Valiant powerhouse artists Raul Allen and Patricia Martin, will this prove to be the breakout Amanda McKee deserves? 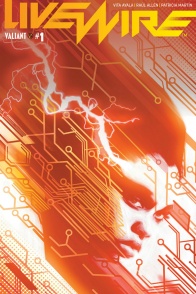 Accomplice. Mentor. Savior. And now, Enemy of the State. Seeking to protect other vulnerable super-powered psiots like herself, Livewire plunged the United States into a nationwide blackout with her technopathic abilities, causing untold devastation. After choosing the few over the many, she must now outrun the government she served – and those she once called allies. With the whole world hunting her, what kind of hero will Livewire be… or will she be one at all?

From rising star Vita Ayala (Supergirl) and astounding artists Raúl Allén and Patricia Martín (SECRET WEAPONS) comes an electrifying new series that will launch the Valiant Universe into a new age of champions!

It’s clear from the start of this issue that Ayala knows how to pace a book. Within the first three panels, we get a picture of clean, civil innocence on an airplane: co-workers bantering, a comfortable middle-aged man receiving a beverage, and a child looking out the window. Without warning, the very next panel, Ayala chooses to have said airplane collide with another gigantic aircraft in the middle of the sky, grabbing readers’ attention immediately to see how this dramatic shift from order to chaos turns out. From there on, Ayala delves deeper into what makes Livewire tick, each page and sequence peeling away another part of her motives. We start with the simple: rescuing civilians from the collision with little fuss. Then we see Livewire move into her “home”, filled with limbless mannequins and surveillance technology as Livewire narrates that people thought she was mad with power, pushing her into more of a grey area. Things are further complicated as we see her meet up with the psiots from her old “Secret Weapons” days, yet they reject her because of her recent actions. Because of this, we see Livewire, and the reader, start to question her motives and identity more. Ayala then leads the plot into a conflict with a villain whose actions and motives, when explained to the reader, actually makes sense, which shows a lot great narrative payoff for just one issue of content.

For a solo book, however, Ayala works the supporting cast particularly well with their established continuity firmly in place. From their introduction roughly a quarter of the way into the book, we get to see Nikki and Owen as pretty headstrong and independent characters, yet Ayala’s dialogue for them feels a little heavy-handed, weaving in phrases like “super swanky” and “shellin’ out”. However, it only gets better from here when Ayala establishes them with as delightfully weird, with Nikki claiming to a security guard that her bird Cagney is her “emotional support” bird, while Owen tries to balance her out by trying to “lay low”. When they come in to contact with Avi, and further, Livewire, they start to show more of their independence, Avi most of all. Nikki and Owen show with their initial hostility to Livewire that they are uncomfortable with her recent actions, but Avi comes off as the most headstrong and hotheaded of the group, calling Livewire out for indirectly killing his cousin in a highly emotional sequence. Ayala uses the cast here to add to Livewire’s complexity – between Avi aggressively accusing her of ill-intent, and Owen and Nikki tentatively standing in the same boat yet still responding to her message when she calls, we see that these unique characters all reveal a different side of Livewire, showing complete ensemble unity.

Raul Allen’s remarkably clean and detailed art-style works well with the technological aesthetic of “Livewire”. The setting work is something that strikes me instantly. Allen’s work here always feels super grounded in a lovingly rendered real-world setting, yet it never feels obtrusively over-detailed. This is due to a masterful understanding of perspective, and clever use of negative space in panels. On the first page, the panel detailing the planes colliding has a lot of people crowded into it, but they exist at the bottom of the panel – the focal point is on the collision, a small sphere of chaos in a beautiful, cloudless blue sky. The same technique happens a few more times over the issue. When Livewire arrives in her home, there’s a bunch of strange mannequins and computer technology, but the panel showing this is largely dedicated to Livewire’s angelic descent into the scene. When the “Secret Weapons” team meets up in the Science Center, there’s a lot of people around, but the focus of the panel is on the core cast and the giant aircraft behind them in the background. It’s a clever way to establish a believable setting, whilst still managing to make the book feel clean and uncluttered.

Allen handles action pretty solidly across the board in this issue, though it varies from situation to situation. What Allen excels at, perhaps to the book’s benefit, is making Livewire look grand and god-like whenever she uses her teletechnopathic abilities. When we first see her in the collision scene, she’s flying effortlessly through the air, posed like a Grecian statue but with comfortable ease about her. When we see the “Secret Weapons” group talking, it’s great that Allen draws the characters actively moving around while talking instead of simply standing. However, it can feel a little drastic at times, especially with Livewire waving her hands around a lot in front of her when the group as a whole is trying to “lay low”, and each panel can look a little stiff and deliberately posed too. The physical action scenes at the end are a little better, using nine-panel sequences to show off Livewire’s martial arts abilities, however, the movements from panel to panel don’t always flow perfectly, and like the conversation sequences, the posing can come off as stiff at times.

Colors here are stark and well co-ordinated, handled by Valiant regular Patricia Martin. The palette across the whole issue is pretty consistent, keeping a variation on blues and purples, changing in brightness depending on the scene. It gives the story a sense of uniformity and individuality and makes for some great mood-setting scenes. Contrasting the collision scene, which is highlighted by the clean blue of the midday sky and feels heroic, with the following scene of Livewire’s home, a more scarily vibrant pink and dark blue palette that looks somewhat sinister, is a great way to set a tone that supports to the moral complexity of the character. The final sequence, set on a dark blue backdrop, gives Martin a lot of space to play with Livewire’s teletechnopathic powers. The three-quarter page splash that shows Livewire facing her enemies with a mass of tech surrounding her is beautiful, the tech glimmering as a super-bright blue against the night-time setting. Martin is a clear expert at using colors to support story and character elements, and it’s all on display here.

It’s a great feeling that “Livewire” #1 exists, and is a leading book in Valiant’s lineup. Vita Ayala does the character and her support cast justice, showing the audience a character that is deeply complex in a well-paced and thought-provoking debut. Raul Allen’s clean line-art works fantastically for environmental rendering, but a little less-so for creating fluid action, but witnessing it through the filter of Patricia Martin’s beautifully harsh color palette makes for some great visual storytelling. This is a superhero story that you’ll want to get behind.

Final Score: 7.5 – “Livewire” #1 is a great solo debut for the longtime Valiant character, with complex character work, and stunning clean-lined and vibrant art.