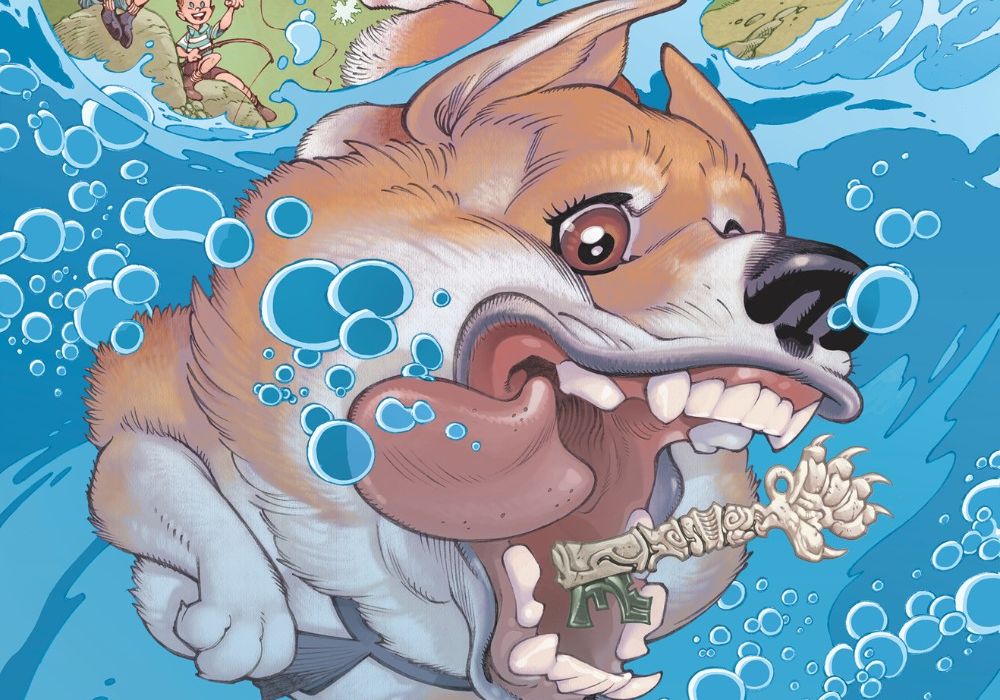 Between 2008 and 2013, IDW Publishing released one of the best horror comics created in the 21st century: “Locke & Key.” Without spoiling too much, it was a multi-volume epic about a family who moved into an old house filled with strange and mysterious magic, along with a creature stuck in a well that had a murderous fascination with a bunch of keys lying around the house that had the ability to unlock amazing powers. The series was the fantastic comic book debut of writer Joe Hill and wound up winning a whole bunch of well-deserved awards, including the Eisner for Best Writer in 2011. There were several attempts to produce a television series over the years but they all fell flat, although Netflix has picked the comic up for a series and has already filmed a season, so here’s hoping it works this time. 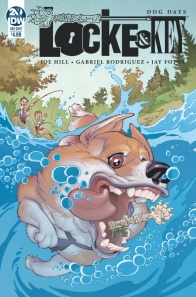 TWO new stories by creators Joe Hill & Gabriel Rodriguez—“Nailed It” and “Dog Days”—plus a behind-the-scenes tease of the coming TV series, and a 5-page preview of an all-new series by Hill and artist Martin Simmonds, too!

Sadly, “Locke & Key: Dog Days” isn’t a return of the fantastic series, but it is a one-shot comic set in the Locke & Key universe and with the same creative team attached, so it’s definitely better than nothing. The comic is actually two stories packaged together in a single issue. Also, there’s a long advertisement for a new IDW series written by Joe Hill called “Dying is Easy” that is pretty good and does deserve some mention, but won’t be making it into this review. As a result, this review is going to be two short reviews for the price of one.

The first and most prevalent story in the comic is the title story ‘Dog Days.’ It’s a short, eight-page story about a group of boys playing with their dog, although since this is the “Locke & Key” universe there is a fun little twist to the proceedings that makes it unique and fun. The story is written by the series creator Joe Hill, an author who tried and failed to keep his true identity a secret in order to avoid comparisons to another titan of horror stories. I’m not going to spoil his identity here in order to respect the author’s wishes, all I am going to say is that ‘Dog Days’ is a fun, lighthearted romp about the innocence of childhood and growing up that kind of reminds me of a less serious version of the movie Stand by Me. While it’s a shame that the story doesn’t do much to explore and expand the mythos of the “Locke & Key” story, it’s still a pleasant read and a lot of fun.

The artwork is provided by “Locke & Key” regular Gabriel Rodriguez, who changes his artwork around for bits of the story in order to pay tribute to Rene Goscinny and Albert Uderzo, the creators of the hit Franco-Belgin comic “Asterix.” The artwork has an interesting layout, with the story being told in a strict vertical four panel sequence that utilizes the different art style while the background is made up of familiar locations from the main comic drawn in Rodriguez’s more realistic style that dominated the original comic. It’s a fun experiment and a visual treat, but it doesn’t allow a whole lot of story to be told in each page, which does make the comic feel overpriced for what it is.

The second story is a nine-page story titled ‘Nailed It.’ Unlike the previous one, this is definitely set in the main “Locke & Key” universe, has the same art style as the original books, and re-introduces readers to the main family of the series. The story is set several years after the events of the comics and follows the eldest son of the family—a boy named Tyler Locke—as he manages to pull off some very quick renovations of the infamous Key House where the books were originally set. Once again, since this is a fantastical universe where strange things can happen, there’s a twist that allows Tyler to pull off seemingly impossible tasks without a whole lot of effort.

The greatest strength of ‘Nailed It’ is how much faith writer Joe Hill has in the art to tell a story with minimal dialogue and explanation. With the exception of a single bit of dialogue at the very end, the story is mostly silent, allowing the reader to soak in the details and meaning of each panel on their own. However, while it is nice to see the family together again and on the page after a six-year hiatus, this story is going to depend entirely on how much the reader knows about the story, setting, and the family as a whole. Also, it feels less like the story has something to say and is simply acting as a short little prologue for something bigger.

The artwork for ‘Nailed It’ shares many of the same strengths and weaknesses as the writing. Gabriel Rodriguez allows the story to breathe with wonderfully drawn splash pages and double page spreads that give the story a sense of grand magic and epic scale. His artwork is perfect for this kind of story, since his ability draw incredibly detailed faces allow the reader to figure out what’s going on in each character’s head with having them say a word. However, just like the writing, it’s very difficult to fully grasp what’s going on without knowing who these characters are, which would require prospective readers to have read the main series first.

All things considered, it feels like “Locke and Key: Dog Days” isn’t so much a comic as it is a collection of shorts that were created and thrown together very quickly in order to remind readers that this franchise exists, and to generate some buzz for future projects. It’s a nice little side story that long time fans and die hard readers of “Locke & Key” will probably appreciate, but anyone interested in reading a fantastic horror comic would probably be better off finding the original series first.

Still, it’s nice to have “Locke & Key” back in the public eye, and it will be very interesting to see where it goes in the future.

Final Verdict: 7.2- A fun little one shot for one of the best horror stories created in the past decade by a fantastic creative team. However, this is a book that would probably more suited for die hard fans and completionists only.