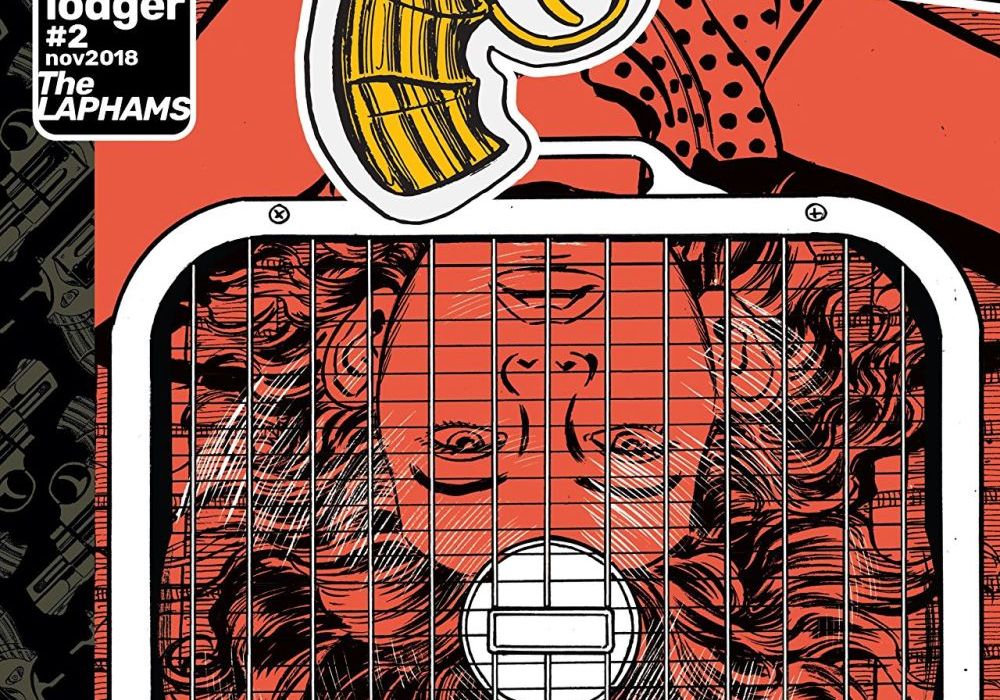 Coming off the heels of an intriguing but rocky debut, “Lodger” #2 tries to pause its breakneck pace to build out its world. 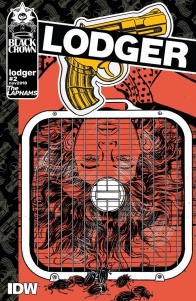 Cover by David Lapham
Written by David & Maria Lapham
Illustrated by David Lapham
Ricky Toledo was 15 when a handsome lodger rented a room in her family’s small, rural home. Lust, adultery and murder would follow. It’s three years later and the serial killer who murdered Ricky’s mother and got her father sent down for it is cutting a bloody swath through the broken soul of America. This warped game of cat and mouse between a tortured young woman and a serial killer can only be told by the comics masters of the crime thriller and the art form, David and Maria Lapham.

“Lodger” #2 digs into the history of Ricky and “Dante”, which is very necessary after the first issue’s heavy lift of dueling narratives and high action. Issue #2 slows the pace a little to detail how Ricky and “Dante” first met while Ricky continues to seek him out in the present timeline, but the book becomes an ouroboros of stilted narrative choices and confusing art that make for punctured mood, little tension and a lot of visual confusion.

Ricky’s high-drama investigation into “Dante” as she tracks him from small town to small town is interesting, but it’s hard to get a read on her character. Learning of “Dante” through his blog voice is believable because he’s (allegedly) a serial killer, so it’d be hard to crack that shell. As for Ricky, well. The drama of the violence is supposed to have marked Ricky and utterly changed her life, and her single-minded focus makes sense in this context, and feels intentional. However, I have to be able to relate to a character who makes questionable choices herself, and the Laphams don’t allow me that just yet. And, reckless as she appears to be, I’m not buying that she’s been on his trail for years without accidentally killing someone before now. She has no trouble stabbing a cop in issue #1 or holding up a restaurant in issue #2, so how has she not been caught? If my confusion’s intentional and her haphazard nature has indeed netted punishment, I’m not entirely on board because she seems too erratic to be functional for this long.

This lack of believability can be narrowed down to the comic’s main problem: pacing, by way of narrative overload. A perfect example is the mid-issue, two-panel flashback to Ricky beating up a kid at what I assume is a neighborhood BBQ for putting a nail in her hot dog. It’s no doubt meant to resolve her nickname, but given it’s shoehorned between her hamburger theft and escalated robbery attempt, it doesn’t entirely land. It breaks up the humor of the restaurant manager and cook scrambling for their clothing and punctures the tension I care about, which is: what drives her to rob the place? I get a thread of it in the preceding panel, but this flashback is unmoored in time or space and ill-timed as a result. This adds to the unintentional chaos of the book, because the Laphams are trying to explain too much too soon. We’ve barely met Ricky, and the “Nails” moniker is intriguing enough that they could salt that detail in down the line. Reigning in a few of these impulses wouldn’t detract from the broken world effect, and would actually enhance its believability by tightening the flow.

I’ll be frank: I don’t think this comic works as a black and white piece. Lapham’s art is decent, but there’s often too much going on from panel to panel to let your eye settle or absorb any narrative detail, which makes for a cramped and confusing read. Making a choice to leave a colorist off the team can mean that you showcase some excellent linework, but tone and mood can suffer and you lose the additional bump to visual storytelling that defines the medium. There are a lot of instances of inks crowding characters and objects and too much fine line detail overwhelming the eye, on the 8-panel pages in particular. The daytime scenes and interiors sometimes bewilder because there are too many people and not enough depth of field. There are some well-crafted large panels that strike a happy medium between rough style and good composition, but most panels smaller than half a page start to suffer. Add in the omnipresent blog narration in dense, serif-filled black boxes and it’s just too much to handle.

You can fix this two ways: either ease off the textures and shadows or go all-in, because there are some nighttime panels that work well when the white space becomes intentional lighting for a scene. Because this book can’t settle on one option, I really miss the tonality and nuance color can bring to crime comics. Lapham’s work feels like it’s shouldering an unnecessarily heavy load, and so do my eyes as I try to track sound effects, movement lines and what subtlety I can glean from such a flat page. A talented colorist could go a long way toward fixing these issues.

The lettering is done by hand, which I usually love, but this time the choice gives the book an unfinished edge that doesn’t fly, despite Ricky’s youth and the gritty subject matter. It also clashes hard with the typeface used in the blog narration. Add in some patchy pencil styling and too much padding in the balloons, and the messiness feels unintentional rather than chosen.

I want to like this book. I really, really do. I love the concept and the gritty drama, and crime stories are right up my alley. I appreciate Ricky’s erratic nature and her wounded teenager decision-making. I am intrigued by “Dante” and his motivations. There’s just too much going on per issue and too many ragged craft edges to keep me invested. I don’t have a moment to land in this book and take it in, either visually or emotionally, and the cumulative frenzy evoked by this lack of pause doesn’t feel like it’s been built on purpose. If it is intentional, fair play, but it’s not effective.

Final Verdict: 4.5 – “Lodger” #2 slows the pace a little, but too much detail and some poor art choices mean what should be a tautly paced thriller instead confuses, overwhelms and, so far, disappoints.