She may be too quick for us to get a direct quote, but that doesn’t mean the adventures of Lois Lane are any less enjoyable and riveting for the debut of her first ongoing series in decades. 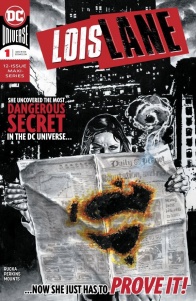 On the road and out of Metropolis-and carrying a secret that could disrupt Superman’s life-Lois Lane embarks on a harrowing journey to uncover a threat to her husband and a plot that reaches the highest levels of international power brokers and world leaders. Critically acclaimed and best-selling author Greg Rucka and master storyteller Mike Perkins team up for a tale of conspiracy, intrigue and murder that pushes even Lois to her limits.

Greg Rucka’s writing on “Lois Lane” is not a superhero story. It is a story within the world of superheroes, but that is a completely different animal. “Lois Lane” #1 is something more personal, more dangerous on some levels that are rarely touched by the high-flying adventures of the eponymous character’s husband. By bringing the fights down to Earth (both literally and figuratively), there is added emphasis on the lower deck drama of the common people.

In all, Rucka examines a key question: what is it like to be a non-powered journalist in the DC Universe? As it turns out, there’s a surprisingly high number of parallels with the experiences regarding journalism in the reader’s own reality. The overall feel is not unlike a political thriller transposed into the world of superheroes while being completely divorced from their individual troubles, with connections such as calling up an ally who can get information out of a hostile country, all-but-certain covered-up execution of journalists. References to the likes of Bob Woodward and Mark Felt of the Watergate scandal in positions related to a costumed hero work alongside the likes of LexCorp to present a world that, despite having the trials and tribulations of the near-constant supervillain catastrophes, still makes room for the problems common to life in the real world.

In making for a highly relatable world, Rucka makes Ms. Lane into a figure who, rather than just look up to, readers can relate to as well, her marriage to one of the most famous superheroes in the world notwithstanding. Her interactions with her family and co-workers further that connection. Complaints from Perry White over at the Daily Planet about her spelling errors and lack of use for the oftentimes dreaded autocorrect feature brings out some comedy to keep the story from getting too dour while simultaneously drawing attention to Lane’s unending drive toward the truth through the metaphor of battering the aforementioned autocorrect into submission. Meanwhile, her interactions with Clark Kent are sure to bring a smile to readers’ faces, ranging from his romantic comments and admittedly dorky insistence on what constitutes a breakfast to her lack of concern for what others think of her apparent two-timing with Superman versus her husband, even bringing up the double standard of how they only look down on her, not on Superman, due to him being male.

There are some connections to more recent Superman works, but in ways that do not break the flow of the story. For example, the events of the “Superman” arc called ‘The Unity Saga’ are briefly brought up, but dismissed in a natural, organic way to be discussed elsewhere, treated as an awkward discussion to have at another time rather than just ignored.

Important to “Lois Lane” #1 is the flow of dialogue. While some conversations do go on a bit long or involve snippy back-and-forth repetition, none of it reaches the level of David Mamet’s practically trademarked style, and instead feels both organic and capable of showing real emotion, particularly with the revelation to Ms. Lane about the death of a journalist who had been working on a story in Russia.

Worth noting is the political angle. Rucka does not beat around the bush with his political alignment, using some clear analogues to figures in 2018 and 2019 United States Presidential policy, but the connections, while rather obvious from the standpoint of readers now, are oblique enough that they can be ignored later on down the line as fictional portrayals. There are some unrealistic moments based around hopes people sometimes have about said policy and the press, but it works as a story regardless and brings at least some catharsis for the weary.

Mike Perkins is a phenomenal choice for the artist on “Lois Lane” #1. His gritty, realistic style is not unlike Michael Lark’s work on Rucka’s “Lazarus,” focusing in on facial expressions and excelling in quiet moments, with emotional range from joy to turmoil and all that works between and beyond. Furthermore, the heavy shadows work toward the dark and down-to-earth nature of the story, being nerve-wracking or intense without being overbearing, adding an extra layer of the aforementioned grit.

Perkins utilizes a variety of perspectives and close-up shots to give a feeling of being a part of the action, rather than simply watching from afar. It all comes across not unlike a television program such as a press conference or spy drama, both of which are of course appropriate entry points for the Pulitzer Prize-winning journalist herself.

Bringing his expertise in horror from “Immortal Hulk,” Paul Mounts’s mastery of hue and tone, of light and shadow, proves to be the perfect colorist for “Lois Lane” #1. An overall dull color palette works well to complement Perkins’s pencils, adding to the realism of the darker, more vulnerable corners of the DC Universe without seeming too down on everything either. As he opts to put in a splash of brighter color during the daylight hours, it all lends itself well to a mundane person’s life in a world of superhumans.

Final Verdict: 8.5– Both very timely and written in a way to still be hypothetically understandable in later eras, the start of ‘Enemy of the People’ is doing great.