One of the more consistent books in all of comics – even if its release schedule is not – “Lobster Johnson” scratches a very particular itch, and “Garden of Bones” is no different in that regard. Keep reading for a spoiler-free review. 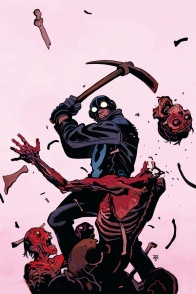 When an undead hit man goes after the NYPD, the Lobster steps in to figure out if it’s a zombie—or something worse.

This one-shot brings two new elements into the Lobster’s corner of the Mignolaverse: zombies and Stephen Green.

Let’s tackle the zombies first: as Mark discussed with John Arcudi, this is not the George Romero-influenced zombie story that has become so prevalent in the last two decades or so. No, this uses zombie in the voodoo – or, sorry folks, fimbakonu – sense, where a dead person is controlled by a sorcerer of some kind to do their bidding. This type of creature fits in perfectly with the time and tone that LoJo inhabits, and it seems a little silly that it has taken this long for a LoJo and a zombie to meet.

This issue also sees Harry as an – if not the – integral character of this story. Sure, the Lobster is always the focal point/center of the tale, but Harry really gets a moment to shine here. So many of LoJo’s associates tend to run together, or operate as a unit, so it was nice to give Harry some time to shine here, and shine he does. He turns out to be quick with both a shotgun and his mind, and saves the day twice. Harry’s presence really helped elevate this story from your typical Lobster story, as he both does what all the normies in these stories do – grounds the action – and also gives the story some emotional heft, something that LoJo stories often lack.

Green’s artwork is a nice fit here, as well. The great Dave Stewart’s colors help the book feel apiece with other Lobster stories, but Green’s art is a bit more visceral and gritty than regular LoJo artist Tonci Zonji’s work, but the subject matter really demands that. In fact, this issue, visually, more closely resembles an issue of “B.P.R.D.” than most LoJo stories, which is absolutely appropriate.

There’s a wonderful moment in the book, where Harry shoots the zombie, where his coat separates from his body, showing just how powerful the shotgun blast was. While it wasn’t the most important panel in the issue, it shows Green’s talents in one simple image. It displays the impact of the blast in three different ways – the coat, the blood, the sound of the blast overtaking the background of the image – and yet, each of those elements, when taken as a whole, seem less obvious until you really sit with it. On the page, it reads fine, but isolate the image and look at the depth in that one panel.

There isn’t too much more to say here; I’ve talked before about finding new things to say about Lobster stories, but after reading this, it became very clear to me that this is my problem, and not a fault in the storytelling. These stories scratch a very particular itch: pulp heroes who punch and kick supernatural things. This issue delivers a great version of that.