The Lobster is back in a new three-part miniseries. Join us for our spoiler-free review. 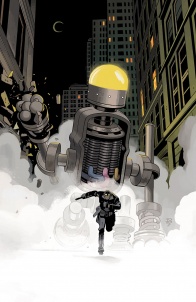 A trio of skyscraping robots crash into a Manhattan bank and leave Lobster Johnson with two mysteries to solve: what is behind the massive machines, and why would the robots pull a heist without taking a penny?

Mark Tweedale: Well, this was a nice surprise. I wasn’t expecting a new Tonci Zonjic–drawn story so soon. I figured there’d be a few more short stories to fill the next trade before diving into a big five-part arc. Instead we have a three-part arc to wrap up the trade.

Which works out nicely for a few reasons. Firstly, I always enjoy the “Lobster Johnson” stories, but when Tonci Zonjic is on the book he takes it to a whole other level — No one else brings the Lobster’s 1930s world to such vivid life. Secondly, I think “Lobster Johnson” works better with shorter stories, and three issues seems pretty much perfect. Thirdly, it’s not a one-shot, so I’m expecting some character development, and I love character development. Don’t get me wrong, the one-shots are great (“Caput Mortuum” is still my favorite “Lobster Johnson” story), but the emphasis of the one-shots is usually on the mystique of the Lobster as witnessed through the eyes of the criminals of that story. The longer stories instead favor the supporting cast, such as Cindy Tynan and the Lobster’s crew, as the POV characters. Ultimately, the Lobster is a plot device, and the supporting cast are the characters we’re supposed to relate too.

Mike Romeo: Exactly my thoughts as well. The one-shots always have a sort of adventure-of-the-week feel to them, which gives readers a sense of the legend around The Lobster. Meanwhile, the multi-parters seem like a way for Arcudi to demystify the character by giving us an almost inside-baseball look at his operation and cohorts.

There’s so much I want to touch on with this issue, I almost don’t know where to begin! Since I already brought him up, let’s talk about some of what Arcudi’s doing here. I get the sense, and I’ll have more to say on this in a bit, that this issue feels a bit more inspired by the radio shows and motion pictures of the era than the pulps. I’m thinking specifically of the cops’ dialogue; there’s something about their lines that read more like they’re supposed to be heard over a crackling radio than read in a novel. Did you get any of that?

Mark: Yeah, I did, especially in the latter half of the book. There’s a moment in there where all the cops are talking about stuff happening that we can’t see and then in the next panel we see the result of those actions (accompanied by a big sound effect). Add to that Cindy’s radio news reporter moment in the first half, and it’s pretty hard to miss. And it’s not just the radio plays this story tips its hat to.

I know you were going to mention how this issue shares a certain similarity to an old Fleischer Superman cartoon, “The Mechanical Monsters”, and you’re absolutely right. It’s unmistakable. Hell, even the title “Metal Monsters of Midtown” is a reference to it. The issue wears its influences on its sleeve.

Honestly, I think if someone looks at “Lobster Johnson” as simply drawing inspiration from the pulps then they’re missing so much. The series is more than that.

Mike: Oh, absolutely. I got the distinct feeling that this issue is a bit more out-in-the-open about its non-pulp influences, though. And I was totally going to mention that specific Fleischer episode! Not only do we get to see giant robots storming the streets, but there are also cops firing their guns wildly into the air, creating further danger for civilians. I feel like there was a lot of over the top cartoon wackiness at play, which really sunk its hooks into me.

And of course, everything Arcudi threw into the narrative could have fallen flat in the wrong artist’s hands. Now, I know we’re both big fans of Tonci Zonjic, but good golly I don’t think he’s ever looked better. Every page in this issue is a jaw dropper, from the design of the titular Metal Monsters all the way down to wallpapers and light fixtures. Even with his design chops aside, I think his cartooning is stronger than ever. How he conveys motion, the way he draws settling dust, everything on these pages is presented cleanly and economically. I also feel like he’s getting more gestural in his faces, too. This panel in particular stuck out to me:

Maybe it sounds silly, but I was struck by how simply he chose to draw a baggy eye. That sort of simplicity takes a lot of confidence, you know?

Mark: Oh, wow. I remember stopping at that exact same panel to admire that exact same thing. How interesting. Zonjic has a real knack for drawing interesting supporting characters. They may not even have a line of dialogue, but there’s an immediacy in the way they’re drawn that makes you feel like you already know something about them.

Mike: For sure! He really went to town on all of the cops, too.

And just to keep on the animation tip, Dave Stewart really blew the doors off of this one. The way he colors these figures in a flat, almost cel shaded way plays so nicely against his textured backgrounds. There’s almost that traditional animation look to it, like the characters have been painted onto celluloid paper and placed over static scenes. I know it’s something that’s said a lot, but I’m constantly astounded by the way Stewart is able to adapt his approach to every artist he’s paired with. They guy’s a massive talent, and this issue is an undeniable accomplishment. I mean, this panel alone should earn some sort of award.

Mark: Zonjic is one of those artists that knows the power of simplicity, and the coloring has to match that to work, and that means the colorist has got to be really specific.

Oh, and I have to say, holy crap those robot designs are fantastic. I’m not usually a fan of humanoid robots — I like my robots to look more alien — but these ones straddle both worlds in a way that really works for me. Each one has a distinct silhouette and personality. Plus they’re also nice and chunky, which is perfect for the era. I think this is another reason Zonjic’s such a great fit for these books. When he adds something new, it fits in the 1930s. It never feels like another era has been dumped in there.

I don’t really have any more to add in terms of the art inside the issue. You basically said everything I was going to say. But I did want to mention the cover on this issue, which Zonjic did the colors for as well. I’ve probably said this before, and no doubt I’ll say it again, but I absolutely love Tonci’s covers. They’re not only striking designs, but they distill the essence of an issue perfectly. You want to know what this issue is like, look at the cover — that’s what you’re getting in a nutshell. There’s no ambiguity there.

Mike: I was wondering if you noticed anything different with the lettering here. Clearly the word balloons are Clem, but it really looked to me like the sound effects were done right on the board. I’m looking specifically at the linework on them, and they seem to at least mimic Zonjic’s figure work.

Mark: Actually, Zonjic’s always done his own sound effects. It was something I fell in love with back in “The Burning Hand”. His sound effects in the cannibal attack sequence were fantastic.

Mike: Huh, I don’t know how I never noticed that before. I’m going to go digging in my longboxes for that issue now. Better late to the party than to never have arrived, I suppose!

So let’s get down to the grades. I feel like this might be the best issue of “Lobster Johnson” to date. A controversial statement? Maybe. But it’s one I’m sticking with!

Mark: I think this was written with certain goals in mind and it absolutely met them, no question. Still, I like my character stuff, and this issue was a bit lean in that regard. This is not a fault of the issue, it’s just what I like to read. The art alone is worth it though, and I get a kick out of seeing Arcudi and Zonjic just having fun in the Lobster’s New York. It’s an 8 for me.

Final verdict: 8.5. This is an issue that celebrates the era it’s set in, with genuine love for its influences woven into every page.