Acudi and Zonjic can seemingly do no wrong in another excellent issue of “Lobster Johnson.” 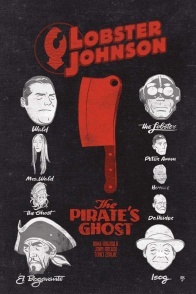 The Lobster searches for a connection between a missing reporter and the appearance of a ghostly pirate ship.

In my review for the first issue I avoided spoilers, but that won’t be the case here. Here there be spoilers. Ye be warned.

I had a blast with the first issue of “The Pirate’s Ghost,” the pirate ship in the fog scene especially. The second issue keeps up the trend with yet another visual feast. In particular, I have to mention Zonjic’s colors here as it was something that jumped out at me in the first issue, but in the second even more so.

A sequence early on with Bob visiting a catatonic Gina Wald is an excellent example of how he uses color as narrative. In the first two pages of the sequence, when we first see Gina, she’s bathed in a shaft of light washing out her skin tone to white. Everything out of sight behind her is much darker, but directly in front of her, the view outside her window is almost completely white, framed by green wallpaper which matches the green in her eyes.

At the end of the page, we’re pushing in on those eyes, into the black of Gina’s iris. 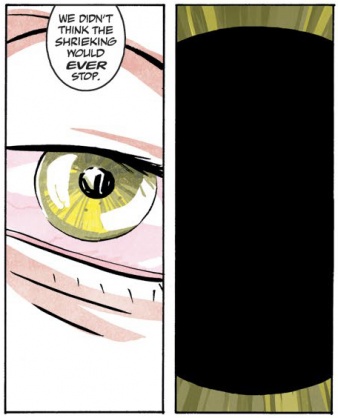 The next two pages are about what she saw seven years ago, walking in on Arnie Wald as he hacks up a corpse. The palette of these two pages is very restricted. Obviously there’s a lot of red, which gradually fills the scene to the point that the page on right is surrounded by red in the bleed and trim area. There’s also no real background in this scene; it’s all solid black, just like the the iris of Gina’s eye. But it’s the white that I find fascinating. In the panel of Arnie hacking up the corpse, he is bathed in white light. 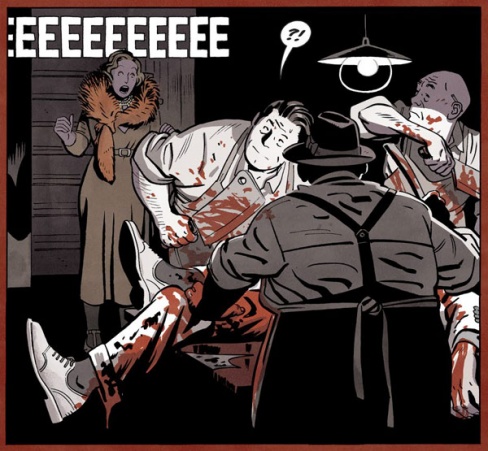 The only other white element in the scene is the ’EEEEEEE’ of Gina’s screams, gradually taking over the scene, and running off the bottom right of the last page, off into nothingness…

And on the page turn, the very next panel is Gina in the present, utterly surrounded by white, like that sound effect has gotten so large that it has utterly taken over the panel, the sound ringing in Gina’s ears. She is practically drowning in white.

The whole sequence is about what Gina has seen, and so we have a room the same color as her eyes, black for when we’re inside her eyes, and white for the horror she witnessed and sees before her still. This is fantastic visual storytelling here and it’s a hell of a way to kick off the issue.

Later in the issue there’s a flashback with the actor, Peter Awan. Again the colors jumped out at me, as the sequence is soaked in orange. It’s a sequence about the lure of Hollywood fame, and I couldn’t help but draw the comparison to the first page of this issue and the early pages of the previous issue which are set outside the cinema, again bathed in orange with the lights of a billboard announcing the double bill of Tarzan films. That’s what Peter wants after all: his name up in lights.

Both sequences are flashbacks, delving into characters’ interior lives, so I love that Zonjic used color as a way to draw us in here.

Tonally, “The Pirate’s Ghost” is going so many different directions and yet it still remains cohesive. Cindy has been abducted… but she’s been abducted by the cartoonish Wald, who’s busy talking to his imaginary pirate friend and writing an ‘articles of surrender’ document. There’s several jokes in there about Wald as an incompetent character with Mr. Isog struggling to keep him focused. In the middle act of the story, this could easily destroy the tension of the story, and yet the opening scene from Gina’s memory hangs over the book, reminding us that whatever Wald is going through, he’s still a dangerous man. We also have Harry angrier than we’ve ever seen him as a further reminder just how much is at stake here.

This is an excellent demonstration of Arcudi’s ability to structure his story around managing tone and character. There was also a nice callback to “The Burning Hand,” the story that first featured Wald and Isog—back then their scheming involved a bunch of fake ghosts, and I couldn’t help but grin when I discovered they were pulling a grander version of the same trick. It has to be one of the most impractical ways to distract people while kidnapping someone. Doubtless there’s more to it than that, but for now I’m having such fun with it, I’m just happy to go along for the ride.

Wald’s relationship with El Bogavante the pirate is played for a lot of laughs. This panel was particularly fantastic, with Wald answering Isog while imagining himself as El Bogavante. 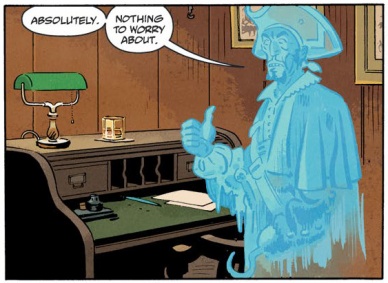 Isog’s irritation and exasperation with Wald are wonderfully palpable, but it’s his incredulity I get a kick out of the most. I mean, he knew Wald back in 1932 when he was the same dangerous man we saw in Gina’s memory, and now he has to watch him play pirate like a ten-year-old. 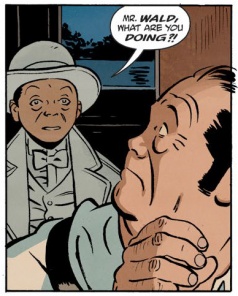 The only thing that dampens my enjoyment is the knowledge that the next issue will be the last for this miniseries. The Zonjic–Arcudi stories always seem to end too soon.

Final verdict: 9. Simply put, this issue was fun. I know that’s not a very grandiose way to describe it, but it’s a very accurate one. “The Pirate’s Ghost” is an unabashedly fun issue told by a pair of creators whose craftsmanship shows in every page.